During my recent Hollywoodland trip, there was one place I was determined to finally visit: the Musso & Frank Grill on Hollywood Boulevard.

Haven’t heard of it? Well, my friends, if you love classic films then you need to know this heavenly place exists. It’s something exceedingly rare in today’s L.A.: a venerable and perfectly-preserved restaurant that’s served generations (and generations!) of stars. Having first opened in 1919, it’s been a Hollywood institution for almost a full century–and its commitment to tradition is refreshingly strong.

When Musso & Frank came on the scene, the silent era had hit its stride and stars like Mary Pickford, Douglas Fairbanks, and Norma and Constance Talmadge were hugely popular. (Some of the era’s most iconic figures, like Clara Bow, hadn’t even made it to Hollywood yet–and neither had the Hollywood sign.) The restaurant was the creation of Frank Toulet, who initially named it Frank’s Cafe before partnering with restaurateur Joseph Musso and renaming it Musso & Frank’s Grill. The two hired a Franch chef, Jean Rue, who designed almost the exact same menu that’s still in use today. How many other restaurants do you know that actually serve Welsh Rarebit and Lobster Thermidor?

In 1927 they sold the restaurant to Joseph Carissimi and John Mosso, who moved the restaurant next door to 6667 Hollywood Boulevard. It has proudly occupied that spot ever since, graciously serving everyone from John Barrymore to Greta Garbo to Marilyn Monroe to Ernest Hemingway. And I’m not kidding about “everyone”–in fact, many a movie contract was discussed over meals at Musso & Frank’s, and many important business deals were discussed in the old phone booth still occupying a back corner. Some stars came in knowing the bartender would automatically bring over “their” drink, and that the chefs would start cooking their favorite meal to their exact preferences. Charlie Chaplin’s favorite booth was the one by the front window.

Musso & Frank’s commitment to tradition today is just extraordinary. The waiters (some of whom have served at the restaurant longer than I’ve been alive) wear the same style of red bolero jackets that they have for decades. All the aged wooden paneling, red leather booths, faded wall murals, vintage lamps and brass hat racks are still exactly the way they were in the 1930s or 1940s.

These and the fancier photos in this post are from MussoandFrank.com. (The photos clearly shot with a camera nicer than mine, that is.)

And then there’s the grill itself, built into a huge brick fireplace and used for every piece of meat that goes to the customers’ plates–yes, the same grill that once seared steaks for Gary Cooper. The metal bars are even wavy from being exposed to decades of high heat!

I went to Musso & Frank’s as a way of rewarding myself for the day’s marathon research session at the Herrick library. (As my eyes started smoking and my brain started to melt around the fifth hour or so of combing through delicate Special Collections materials, I sternly reminded myself: “Dinner at Musso and Frank’s. Dinner at Frusso and Mank’s. Didner at…um…uhhh…”) Having walked past the famed restaurant many times, at long last it was time to pop inside and experience it for myself.

When I walked in I was greeted right away–the impeccable service is instantaneous indeed–and while the tables were all taken there were plenty of seats at the counter by the grill, and so there I happily sat. It was a good spot not just for watching the chef in action, but for trying to drink in those vintage surroundings. 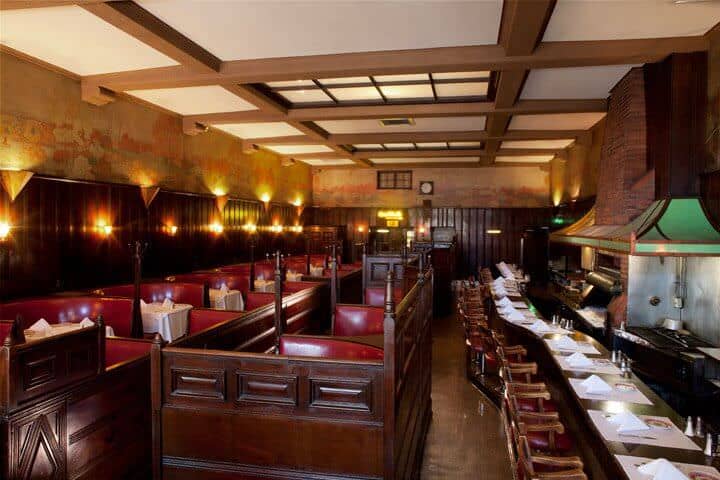 My seat was the one just before the counter curves to the left.

Because, my friends, Musso’s not only looks historic, but it feels historic. The only other times I’ve gotten that sense was when I visited old pubs in Ireland and London.

Supper started with a complimentary plate of excellent sourdough bread and creamy butter. (I wish I could remember my waiter’s name–he was delightful!) My drink of choice was a bourbon highball, that wildly popular 1920s cocktail. (Musso’s martinis are famous, but I already wanted an excuse to come back one day.) And my meal was Chaplin’s favorite dish, which he used to order there all the time, and which I simply had to try at least once–err, it was grilled lamb kidneys with bacon. Thanks for making me eat kidneys, you very British comedian, you. 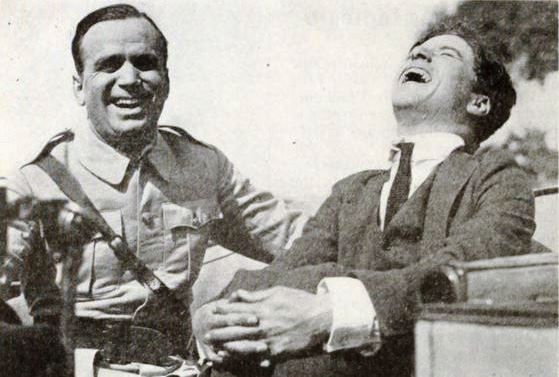 “Just think, Doug, my fans will simply have to order them!”

I watched as the kidneys hit that wavy old grill, which was manned by a casual young chef who clearly knew the precise temps that were needed at all times. And they were quite good–if you don’t mind that kidney taste–and the bacon was a welcome touch. My side was a generous portion of steamed broccoli with hollandaise sauce. It all tasted extra satisfying after that multi-hour research session, buh-leive me.

My entree! (Photo credit: Me)

In the meantime food runners brought out finished meals, stopping to garnish plates with fresh watercress at a station near the grill, and the waiters took their orders with a calm professionalism. It was a fairly busy evening, but there was a sense that everything was going smoothly, every employee helping the place run like clockwork. I know a lil’ something about the restaurant industry, and Musso’s was obviously staffed with total pros.

For dessert I had the chocolate mousse cake (it was a good-sized piece) which came with complimentary coffee. By this time I was as stuffed as could be, and I left knowing this wouldn’t be my last visit–not by a long shot!

If you can’t tell by this review, I loved visiting this nearly-century-old restaurant and urge you to put it on your bucket lists–pronto. It’s the exact sort of thing we film history buffs long to experience when we visit Hollywood. It’s a miracle that it’s still with us.

So when you go to L.A. and find yourself walking down Hollywood Boulevard, dodging the people in character costumes, the pesky fellows handing out fliers, the smiling Scientologists, the slow-walking tourists and noisy groups of teens, and you resolutely march down the seedier part of the street where you see more metal grates and bong shops than glitz and glamour, just know that you can open the door to a certain restaurant and step blissfully back into the elegance of your beloved old Hollywood. Ciro’s may be gone, and The Brown Derby may be no more–but O, my friends, we do have Musso & Frank’s. 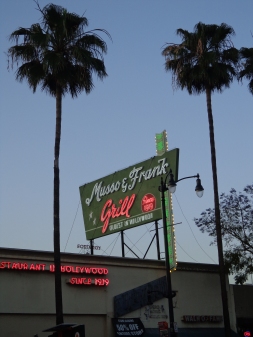 13 thoughts on “Dining At The Musso & Frank Grill: A RESTAURANT Review”