Have you ever wondered: What was the very first western ever made?  It would have to be a film older than a Tom Mix or William S. Hart flick, and even older than the mini-dramas by Biograph or Vitagraph. Many who’ve debated this subject will point to an Edison short, Cripple Creek Bar-Room Scene, which is less than a minute long, is more “vignette” than “plot-driven,” and was shot a swell 120 years ago. I’m gonna point to it, too.

I’ve been drawn to this ancient little film in the past mainly because of one thing: this still photo, likely taken so Cripple Creek could be registered for copyright. Let’s take a minute and just look at it. What a fantastic snapshot of a time gone by–even for a quickie film set! And for a group of actors of sorts (I’m guessing some were Edison employees), they really nailed that relaxed, confident air of the actual tough guys of the American West. (And tough “gals”–yes, that is a man in a dress playing the barmaid.) Compare this with, say, a photo of some Texas Rangers circa 1892: 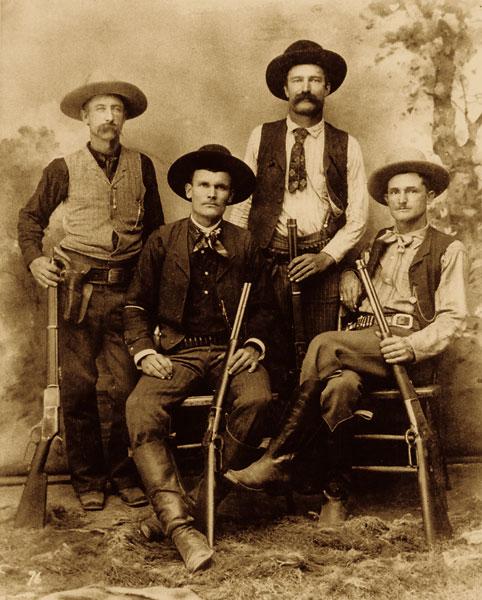 Or this incredible tintype someone bought for $10, which turned out to be an exceedingly rare photo of Billy the Kid (second from the left): 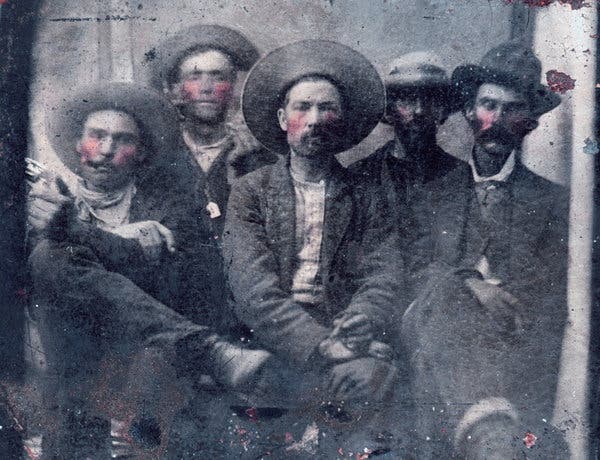 I don’t know how those Edison employees did it, but they were evidently tapping into something.

Cripple Creek Bar-Room Scene runs about 45 seconds long, and simply shows a small, well-worn saloon where a group of men play cards and a rowdy customer comes in and starts up a fight. The no-nonsense barmaid throws the rowdy man out, and everyone celebrates with drinks. Finis!

Folks who claim Cripple Creek as the first Western point to all the obvious elements–the saloon, the jug of “Red Eye” whiskey, the men playing poker, etc. However, there’s a few who say it’s more of a generic bar scene, and doesn’t necessarily take place in the “Wild West.” But I say it certainly does, and that a little research can go a long way to prove this.

There’s an official description of Cripple Creek Bar-Room Scene in the Edison catalogue (by the way, “toper” is another word for “drunk” and I think “vichy” was seltzer water):

Shows tap room of the “Miners Arms,” stout lady at the bar, and three men playing stud horse. Old toper with a silk hat asleep by the stove. Rough miner enters, bar maid serves him with Red Eye Whiskey and he proceeds to clean out the place. Barmaid takes a hand with a siphon of vichy, and bounces the intruder, with the help of the card players, who line up before the bar and take copious drinks on the house. 45 feet. $6.75.

So the film’s supposed to be set in one of the rough mining towns that were part of the Wild West. Also, it was definitely named “Cripple Creek” for a reason. Cripple Creek, Colorado was a real-life ranch town that experienced a major gold rush in the late 19th century. In 1890 Robert Miller Womack struck gold, and six years later the town had swelled from a mere 500 souls to well over 30,000 gold-fevered prospectors. All in all, something in the range of a half-billion dollars worth of gold would be extracted from the area.

Cripple Creek today, with them thar hills in the background.

The mining town was very famous in the late 19th century, and newspapers would often carry coverage of the various goings-on: 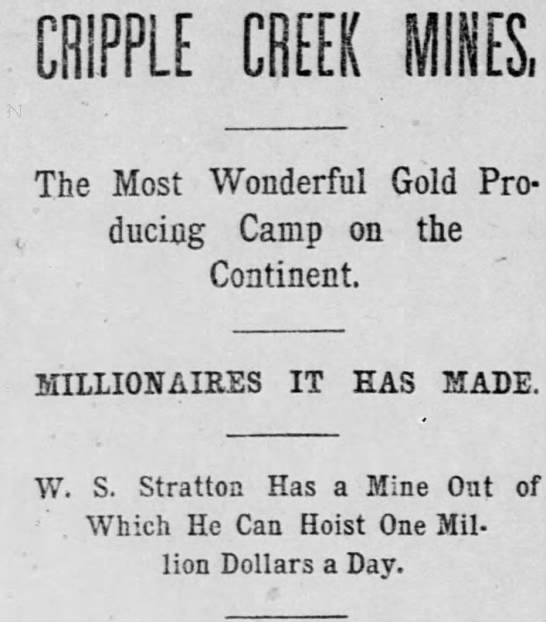 There were even plays made about Cripple Creek–note how this one’s specifically described as a Western:

In 1904 the Selig Polyscope Company released a film called Tracked by Bloodhounds; or, A Lynching at Cripple Creek. This short crime drama, about a tramp who murders a woman and is pursued by a group of men with bloodhounds, was actually shot on location in Cripple Creek–a big draw for audiences back then.

So it seems pretty clear from all this that Cripple Creek Bar-room Scene is referencing a famous town that had already found its place in the lore of the Wild West–and thus, could certainly be called the first Western.

I dare say even the most straight-forward early films can contain some interesting details. In this case, we have the jug of Red Eye Whiskey, a common name for a type of whiskey popular in saloons at the time. It had a reddish color due to being aged in charred oak casks. (Some establishments made their own whiskey with such thrifty ingredients as raw alcohol and burnt sugar–now we know where the term “rotgut” comes from.) The beer is served from a room-temperature barrel, as was common. The drunk snoozing by the counter is wearing a silk top hat, maybe referring to miners who blew their earnings on drinks and high living. And there’s a poster for Ballantine’s Ale on the door, Ballantine’s once being one of America’s biggest breweries. 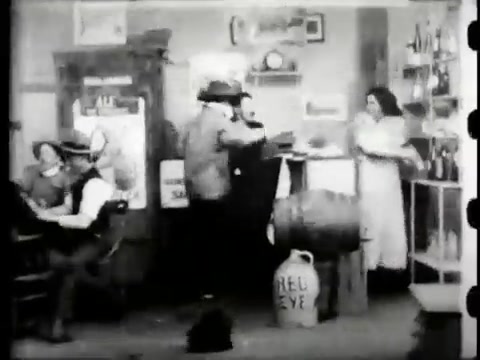 Now, there’s a number of 1890s “actualities” (documentary footage) out there, and I suppose you could argue that one of them could maybe be considered the first Western. In that case Annie Oakley (1894) would be a contender. My thought, however, is that the surviving film most resembling later Westerns–narrative films with rough-and-tumble elements–is certainly Cripple Creek. So unless an even earlier Western-themed work makes an appearance one day, I’m fine with bestowing the honor of “FIRST” upon this rustic little Edison short.

As a chaser, please enjoy this photo of a real saloon in Cripple Creek, Colorado–where one of the regulars is a donkey. 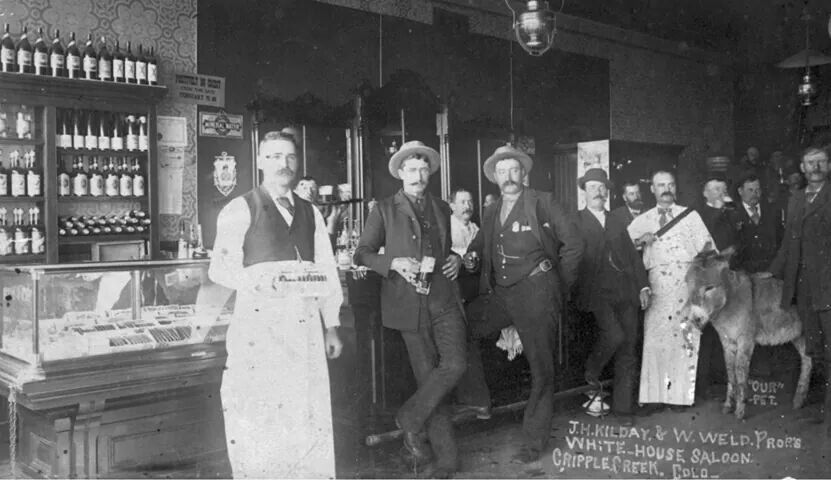