So here’s a list of 8 typical WWI propaganda films, some obscure, some that you’ve probably heard of before, and a couple that are downright eyebrow-raising. 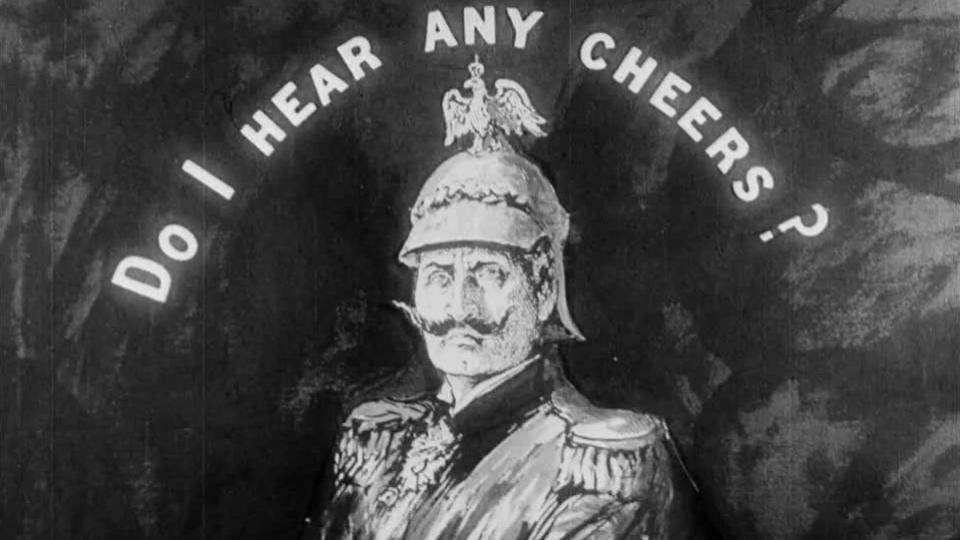 This British split-reeler featured animation by lightning sketch artist Lancelot Speed (and truly wondrous is his name). It references the bombing of the beautiful Reims Cathedral, which angered many at the time. Lancelot dashes off a number of sketches of the “bully boy” Kaiser Wilhelm and the tumbling cathedral. The film decides to end with the Kaiser turning into a sausage, which is then eaten by an English bulldog. It was quite creative. (The only place it’s readily available seems to be here, but unfortunately only folks in the UK can watch it.)

Prior to the U.S. joining the war, a number of Americans hoped the country would stay neutral. This is reflected in the Thomas Ince anti-war drama Civilization, a huge spectacle that depicted a submarine captain disobeying orders to torpedo a ship carrying enemy ammunition. Knowing the ship also carried civilians, the captain chooses to sink his own submarine rather than attack it. After surviving the sinking (or perhaps being resurrected), he attempts to spread the message of peace. Civilization represents a different side of the propaganda we associate with WWI, and is credited with helping Woodrow “He Kept Us Out of War” Wilson get re-elected (that sure backfired). When the U.S. did, indeed, enter the war Ince re-edited and re-released his epic to have a more patriotic flair.

This was another Lancelot Speed cartoon (he was apparently a prolific animator) gleefully lampooning the Kaiser. He and childish Crown Prince Wilhelm are shown playing with a toy submarine in a water basin, which is stopped by a toy ship marked “NOOTRAL” (referring to the U.S.). The buffoonish Kaiser decides to consult his astrologer (von Hindenburg) and hits upon a plan to construct a secret tunnel from Berlin to England–a “U” tube. The droll British humor and charming animation are still a lot of fun today–and it doesn’t hurt that the title is vaguely reminiscent of a certain website.

A popular picture at the time, this was a semi-documentary recounting the experiences of U.S. ambassador James W. Gerard while working in Germany. It was based on his book of the same title and incorporated bits of actuality footage with re-enactments. As far as the content, we need only rely on this exceedingly level-headed review from Moving Picture World: “Its chief merit is its authenticity. It reveals the German emperor and his advisors in their true light–a lot of ruthless savages, whose lust for conquest has made them lower than the beasts.” Feel free to check out the whole review, if you like. 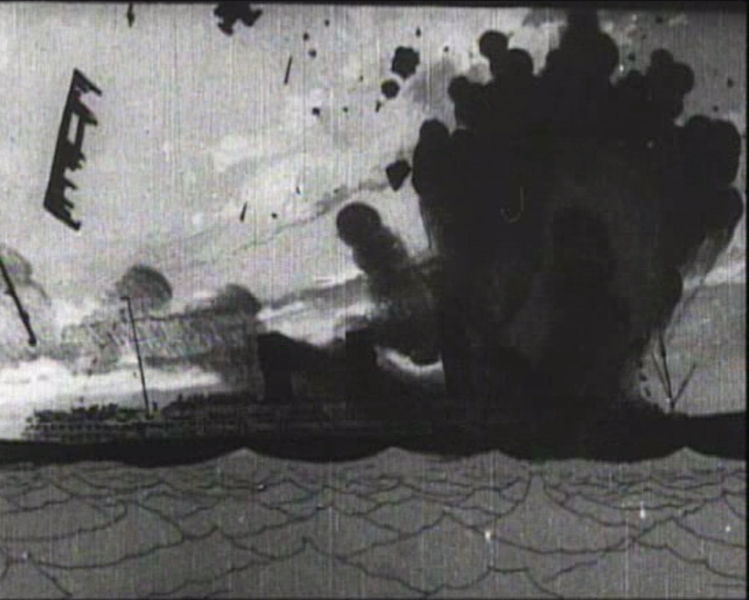 The third animated offering on this list, this was a serious work of hand-drawn art by the legendary Winsor McCay. He recreated the tragic torpedoing of the Lusitania with as much realistic detail as possible, and as a result the film is still moving today, a full century later. While the U.S. had already entered the war by the time of The Sinking‘s release, it still served as a stark reminder of the reasons for going “Over There.” It took McKay and his assistants almost two years and 25,000 drawings to complete the short, and he financed it all himself.

If you’re looking for a brutal, sardonic beatdown of Kaiser Wilhelm and all he held near and dear, look no further than this bizarre film–it already went there, and then some. Kaiser Wilhelm literally makes a pact with Satan, and in the process of mowing down Europe the Crown Prince assaults innocent young women and shoots nobel nuns who try to defend them. In the end, the Kaiser offs himself, his soul descends into hellfire, and Satan himself meekly gives up his throne to the superior evil that is the Kaiser. Said to be “a strong combination of grim war and humor,” it must’ve served mostly as catharsis for audiences who were then enduring the fourth (fortunately final) year of the war. I must now regretfully inform you that To Hell With the Kaiser! is lost. Known mainly for Eric von Stroheim’s gleefully villainous Prussian lieutenant, The Heart of Humanity was very similar to the blockbuster Hearts of the World, although it starts out in a small Canadian town rather than France. Von Stroheim’s Prussian is very much the sort of ruthless savage described by Moving Picture World reviews, and during one shocking scene of him attacking a woman he becomes annoyed by a crying baby in the room–and throws the baby out a window. So there’s that.

This is one of the most famous WWI propaganda films, and it’s also one of the most sought-after lost films. It was written, produced, and directed by Rupert Julian (the first director on the 1925 The Phantom of the Opera) and yes, he also played the titular role. The film follows the trials of a blacksmith and his family who live in Belgium, while also recounting the Kaiser’s villainous grasping for power. Famous scenes included the Kaiser dismissing a neutrality treaty with Belgium as a “scrap of paper” and awarding a U-boat captain a medal for sinking the Lusitania (some pseudohistory was involved). It ends with the Kaiser becoming prisoner of the King of Belgium. Beast of Berlin was a huge hit at the time, grossing over a million dollars–a big feat for a film from 1918.

This was just a small sampling of the many propaganda films from WWI (the Liberty Loans films could fill several articles all by themselves). They’re from that unique era of film history when filmmakers truly pulled out all the stops and even threw in some quasi-Victorian melodrama in service of a patriotic cause.