Praised by reviewers as “one of the few real human documents of the war” and “a direct, good-humored, fighting man’s story,” Private Peat made bestseller lists in 1918 and 1919. Small in stature with a quick, contagious smile, Harold Reginald Peat had been born in Jamaica and later emigrated to Canada with his family. He enlisted ten days after the war began, after hearing his seventeen-year-old neighbor had just joined up: “…I thought if he could tackle it, there was no reason why I shouldn’t.” 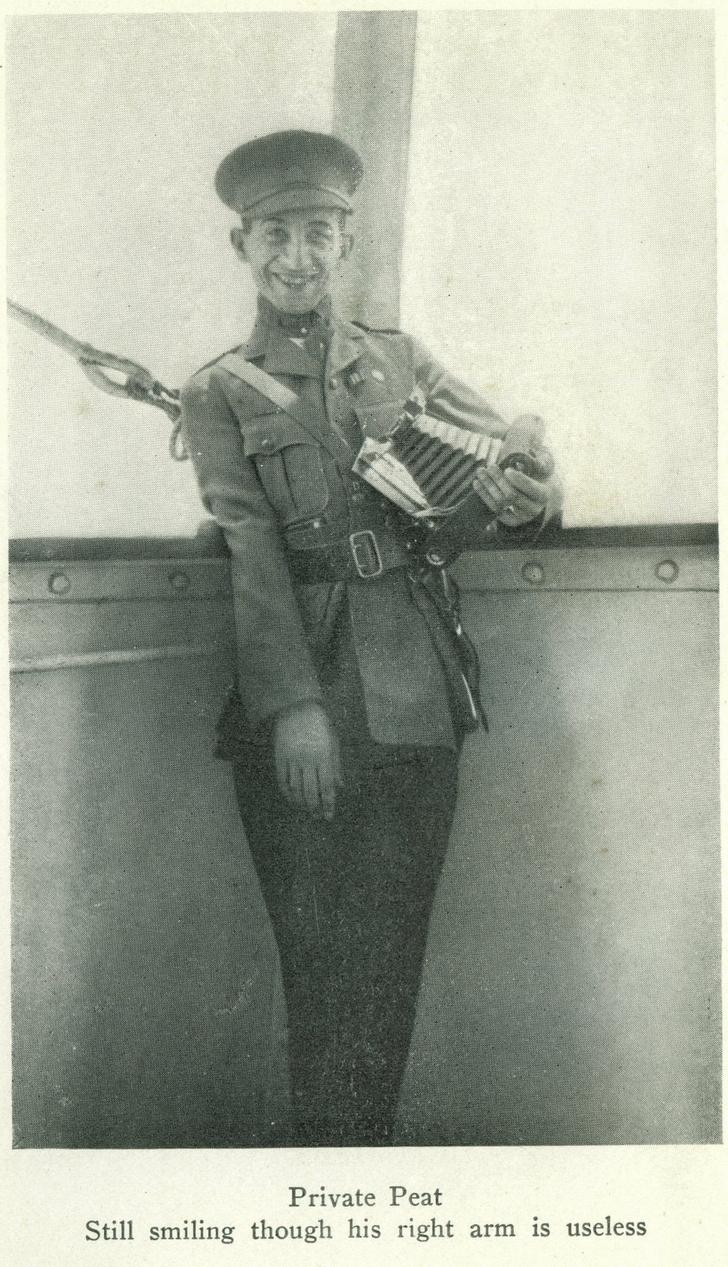 He was overseas fighting in the trenches for two years before being hit by an explosive bullet at Ypres, which destroyed his right lung and damaged his right shoulder. Determined to keep helping the war effort, his wrote his popular memoir and then embarked on a nation-wide lecture tour, telling his story with unpretentious passion in sold-out auditoriums from Tennessee to Minnesota to Kansas. Reports like this one from the Minneapolis Star Tribune show how well these lectures were received: “Private Peat, with Billy Sunday antics, a boyish enthusiasm and pep, and plenty of pithy subject material, last night drove an audience of 2,500 persons in the Auditorium into frenzied outbursts of applause…”

Peat’s memoir, written with the assistance of his wife Louisa Watson Small, is both engaging and absorbing. He jokes quite a bit about the impression his rusty battalion of fellow Canadians made when they arrived overseas: “Never in [the British officials’] lives had they seen soldiers like us. They had been used to the fine, well-disciplined, good-looking English Tommy. Of course I will admit that we were good-looking all right, but as far as discipline was concerned, we did not even know it by name.” He gives plenty of details of life in the service, such as the difficulty of mastering puttees–“It was sure funny the way some of the boys looked when they first put them on, for many of them got the lower part of the leg much bigger than the upper part”–and his recollections of the generous, if monotonous, rations: “The bully beef…is quite good. But you can get too much of a good thing once too often. So sometimes we eat it, and sometimes we use the unopened tins as bricks and line the trenches with them. Good solid bricks, too!”

While he has plenty of good humor, Peat doesn’t shy away from the grimness of the war, writing about the constant hails of shellfire and the hair-raising experiences on the battlefields. “A man dies by gas in horrible torment. He turns perfectly black…Black as black leather, eyes, even lips, teeth, nails”…”The light shells sweep close overhead as they go by our trench. We have to hug the sides close; sometimes the vacuum is so great that it will carry off a cap; if we are not careful it may suck up a head or lift us completely off our feet.”

Interestingly, he claims to have seen young Belgian women who had hands cut off by the Germans, and claims that three Canadian sergeants were crucified with bayonets the night of April 22, 1914. Those types of stories had been circulating like wildfire in the newspapers at the time, and made for powerful–and usually fabricated–anti-Hun propaganda. The “crucifixion” stories seem to have been strongly believed by the Canadian regiments, although today there’s no hard evidence they actually occurred. All of which makes Peat’s inclusion of such stories mighty interesting.

Peat also recalls some inspiring moments of heroism. When he had been wounded, it was during a dangerous dash to bring much-needed ammunition back to the Canadian trench. After he fell, a fellow soldier stopped to turn Peat’s body towards the trench so he could figure out how to struggle back to safety if he fainted from the wound:

“You’re in the right direction–don’t turn round!”

Then the lad got up to go on. He struggled to lift the box of ammunition.

I whispered to him hoarsely: “You’re not going on–you will never get there. It is certain death.”

“Good-bye, old boy,” was his answer. “You don’t think because the rest of you have gone down that I am going to be a piker. Say ‘Hello!’ to Mother for me should you see her before I do.”

I have never seen his mother. I do not know her. If she lives she has the memory of a son who, though a boy in years, was a soldier and a very gallant gentleman. Bob tried to reach the trench, but a rain of bullets got him and he fell dead only a little way from me.

In September 1918 Private Peat was turned into a feature film by the Famous Players-Lasky Corporation. It was directed by Edward Jose at their Fort Lee studio. They decided that no one other than Peat himself would have the lead role And thus, the spirited young soldier donned the heavy pancake makeup of a screen star (time spent lecturing in front of huge crowds must’ve helped prepare him for the movie camera).

One key detail from the book was changed: the onscreen Peat was changed from a Canadian soldier to an American one. Moving Picture World approvingly noted: “Thus the production is pro-American, as well as anti-Hun propaganda, and so skillfully have scenarioist Charles Wittaker and Director Edward Jose woven together the incidents of New England life, the training camp experiences, and the battle moments, that the production is said to breathe the American spirit in every scene and every line.”

It seems to have followed the basic outline of Private Peat’s war experience, although the film–for propaganda purposes–show him being inspired to enlist after suffering a bad dream about German atrocities. Much of the running time apparently focused on his time in the training camp, serving as a staged documentary of sorts of how recruits were trained.

In the end, as Peat recovers from his war injuries in the hospital, he’s visited by his sweetheart, a schoolteacher (another bit of artistic license). Peat’s real-life love story is quite a bit more interesting: writer Louisa Smalls put an ad in the paper asking if anyone knew the whereabouts of her cousin Peter, reported missing in action. Peat kindly replied to the ad with his thoughts on what likely happened (Peter probably passed away in a bombed-out trench). Louisa came to visit him, they became penpals, and their friendship eventually turned into a romance. (This story was included as the final chapter of Private Peat.)

The film had decent publicity, but was somewhat tepidly received. Exhibitor’s Herald stated: “‘Private Peat,’ as a patriotic recitation, will doubtless appeal to many picture theater patrons, although it contains no great novelty or suspense. It suffers by comparison with the many excellent war pictures already produced.” Moving Picture World said: “Private Peat’s personality is charming, and he is a good actor besides, but this and the screen illustrations of his personal adventures serve principally as fine publicity for his book. It is not drama.” On the other hand, Motion Picture Magazine enthused: “Little Private Peat’s performance is unusually effective, while Director Jose has made a spectacular feature which is genuine propaganda.”

From the 1918 Paramount Artcraft Specials pressbook.

Harold and Louisa married in 1916. They would have three children and spend much time touring together and giving lectures. They became increasingly dedicated to promoting peace–Peat’s second book The Inexcusable Lie, published in 1923, critiques the glorification of war. Peat then ran a Speakers Bureau in New York for a number of years, working with high-profile clients (Winston Churchill and H.G. Wells were said to be among them, although I can’t find out any specific information about that), and he also contributed articles to newspapers and magazines. Louisa passed away in 1953, and Harold in 1960. They had apparently divorced in the 1930s, and Harold remarried around 1950.

While it would be great if Private Peat wasn’t a lost film, I’m grateful that the book still survives today. As I read it, knowing that WWI was still raging at the exact moments those letters were printed on the paper, and as I started to poke into the history behind the book, combing through forgotten stories in old newspapers and magazines, one thing sunk in for sure: it’s astonishing how much history there is to uncover in our everyday lives, waiting for us even in places as humble as a thrift store bargain bin.

Many thanks to my brother Paul for lending me Private Peat! (And for finding it in the first place.) Many thanks also to Kay Shackleton for lending me the beatiful–and rare–stills of the film from her website, SilentHollywood.com.

I’m happy to say that the book is available for free on Project Gutenberg, and can be read here.