There’s something about old portraits that inspires the gothic side of our imaginations, especially if the portraits are sufficiently somber or darkened with age. Looking into the steady eyes of a subject long dead has inspired many a horror writer–and more than one filmmaker, too.

One example of that inspiration is the little-watched drama The Portrait (1915), which I stumbled across recently. While it’s sadly only a fragment of a lost film, it contains some pretty neat imagery and is capable of leading us down some of those delightful research rabbit holes.

The surviving slivers of The Portrait amount to about 8 minutes of a 3- to 4- reel film. And by some happy coincidence those slivers don’t do a bad job of standing on their own. I wonder if someone trimmed the feature down to try and make a horror short of sorts, or if they just wanted to save the creepiest footage.

The plot seems straightforward enough. It begins with a young man browsing a secondhand shop crammed with old pieces of art. He’s somehow drawn to a portrait of an old man that would look at home in a Halloween attraction, and purchases it. Naturally, once the portrait’s glowering in his claustrophobic apartment the young man starts growing uneasy around it. He even has several nightmares where it comes to life and climbs out of its frame. Once the creepiness is fully established, The Portrait ends abruptly–which is tantalizing–but all in all I’m glad it somehow made it through all these decades.

I was surprised and happy to see that this film was directed by Ladislas Starevich, the acclaimed animator behind The Insects’ Christmas (1911), The Cameraman’s Revenge (1912) and other weirdly charming stop-motion animation. (Which both amazes me and sometimes creeps me out, but that’s a topic for another post.) Starevich’s unique body of work also included documentaries and several live action dramas, such our subject The Portrait. 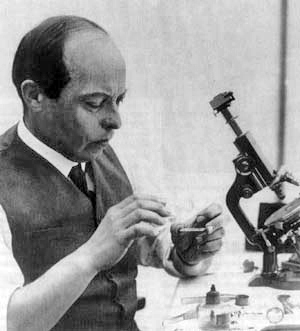 Some of Starevich’s work draws on folk tales and mythology, and he seems to have been particularly inspired by the Ukrainian writer Nikolai Gogol. Gogol, who leaned toward the surreal and satirical with just a little dash of Poe, wrote what was perhaps the first great Russian novel, Dead Souls. His main body of work was published in the 1830s and 1840s, and one of his many short stories was The Portrait, which came out in 1835.

Reading his story helps us piece together what the complete Starevich feature might’ve been like. The young man in the story is actually a penniless artist, who buys the strange portrait with his last coins. He finds himself haunted by the eerie picture and dreams that its subject climbs out of the frame holding a sack of money (as is depicted in the film). Not long afterwards, the landlord stops by to demand rent. The painting gets accidentally damaged, and reveals that a bag of gold was hidden in its frame. The young artist pays the rent and happily makes lavish plans for his future career. He decides to stay true to his own artistic style, and not cave to fickle fashions. But will he stay strong, and will everything really be smooth sailing? (That, by the way, is only part of Part I.)

This was not the only Gogol story adapted by Starevich–in 1913 he also made the infamous The Night Before Christmas (infamous to me, that is). It was based on Gogol’s short story Christmas Eve, which in turn was based on Ukrainian folk tales about devils and witches. Starevich’s film version gives me the willies and may have caused me to long for the sweet relief of Krampus legends, but that’s me. 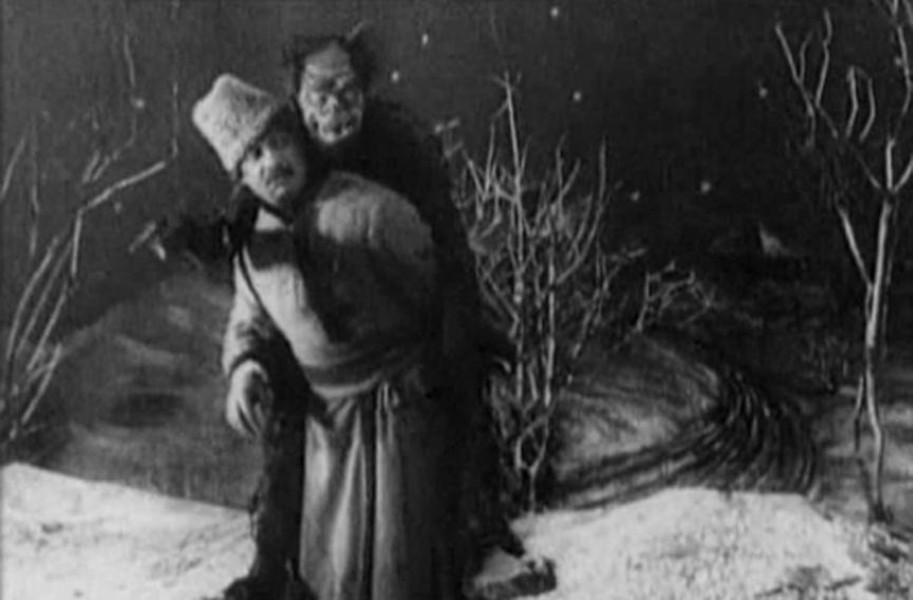 So now that you have a bit of background on The Portrait, here it is in decent quality–kudos to the uploader who paired it with some Rachmaninoff! (Usually when folks add a “score” to a silent film on YouTube the results are nothing short of ghastly, but in this case it works.) If you like Poe-style stories, Russian literature, silent horror films, or some combination of all the above, you just might find it interesting. Enjoy: