If you visit your nearest Halloween store, fringe and white ties are the only options you’ll find. Now, if that’s what you really want to wear, it’s your funer–I mean, it’s up to you. It’s okay, I will only judge you in the privacy of my mind (and only a little harshly). But if you want an authentic look that draws inspiration from the many real styles of the Jazz Age, then boy oh boy have I got some handy tips for you!!

It’s useful to know that today’s 1920s costumes aren’t really based on the 1920s per se, but have evolved from costumes that were popular during ’50s and ’60s revivals. What did those costumes have in common? They adapted ’20s clothes to fit mid-century silhouettes, especially in the movies (much like we still do today–how many times have you seen a “period” film where the actresses have suspiciously modern hair?)

A vintage 1960s flapper costume–note the shortness and the layers of fringe.

Thus, a flapper film made in the 1950s had dresses with a more mid-century fit. For a blatant example, take a look at Marilyn Monroe in Some Like It Hot, for Pete’s sake–half the time I forget that movie’s set in the 1920s: 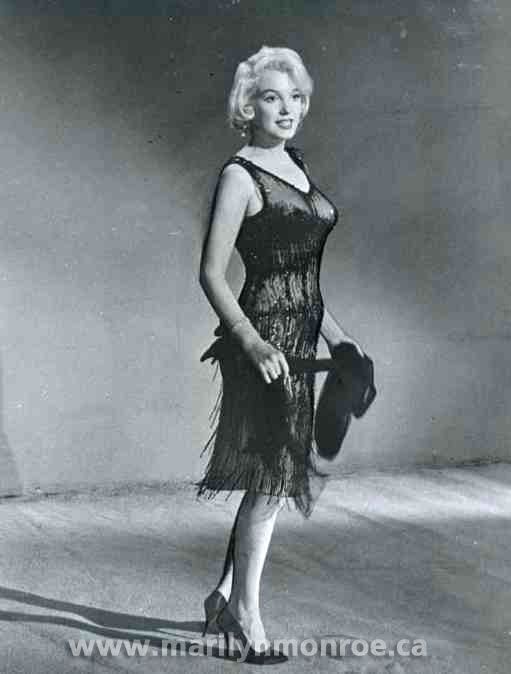 I bet they forgot too and glued on some fringe at the last second.

So with that in mind, let’s take a look at flapper costumes (I’ll be addressing guys’ costumes farther down).

Ladies, feel free to print out this handy illustration:

While the article could end right here, let’s examine the questionable choices of the common costume on the left.

Now let’s examine the costume on the right. The dress is knee-length (although a tad sheer at the bottom), it has a straighter silhouette, there’s a tasteful amount of lace and sparkly touches, the neckline isn’t low, and the model appears to be wearing the right stockings. Also note the shorter hair and tasteful headband. T-strap shoes are an authentic bonus!

They did love their t-strap shoes.

So now you have a general idea of how to look more Jazz Age than Target Sale Item. And now to decide–what type of 1920s style will you go with? There’s about a million options–you could be a wealthy socialite in a beaded evening dress, a well-mannered woman attending an afternoon tea, a flapper who likes to try out edgy new fashions, a regular woiking goil in a typical, everyday dress–weigh those options!

For your inspiration, here’s a few examples of 1920s dresses. The bottom left image appears to be from around 1920, while the rest are apparently mid- to late-1920s (click on the images to see them in more detail):

You can get quite creative with your outfits, as long as you get the basic silhouette down. Here’s some ideas for ladies’ hats too. Keep in mind that while the cloche hat was definitely the hat of choice from about 1924 onward, other styles also came and went throughout the decade:

And if you want to put together an evening wear type of costume, you of course need a hair accessory. Here’s some examples I clipped from 1925-1926 issues of Picture-Play Magazine:

Lastly, if there’s anything else you need to remember about authentic-looking flapper costumes, aside from No Cleavage Ever, it’s this: Don’t Show Your Forehead. Basically, foreheads were not fashionable in the 1920s. Cover up that unsightly expanse of skull with bangs, headbands, cloche hats, turbans–whatever you need to do!

If you look up men’s Roaring Twenties costumes online, what you’ll get is basically this:

Or, horror of horrors, whatever the heck this is:

Fortunately, gents, a good-looking 1920s costume isn’t too difficult to put together. For a more casual look, your basic go-to is a nice suit–and not one with loud pinstripes that make you resemble an overweight Jack Skellington. Here’s some examples of everyday suits below–notice that other than black, you can also go with gray, light brown, or navy suits (and yes, you can click on the images to see details).

Make sure you don’t forget suspenders, wear a vest that matches your coat, add either a nice tie or a bowtie–either one is great!–and never underestimate the importance of a good celluloid collar. Complete your outfit with nice leather shoes, and hey, why not carry a cane? Canes are sporty, everyone knows that. At the very least, carry a pocket watch.

If you want to look really sporty, of course, there’s always the wingtip shoe.

They look best with light-colored suits and white summer suits (that’s an option too!).

Ah, I’ve neglected to mention one of the sportiest 1920s outfits of all–a button up shirt with a tie or bowtie, a patterned sweater vest, and plus fours!! 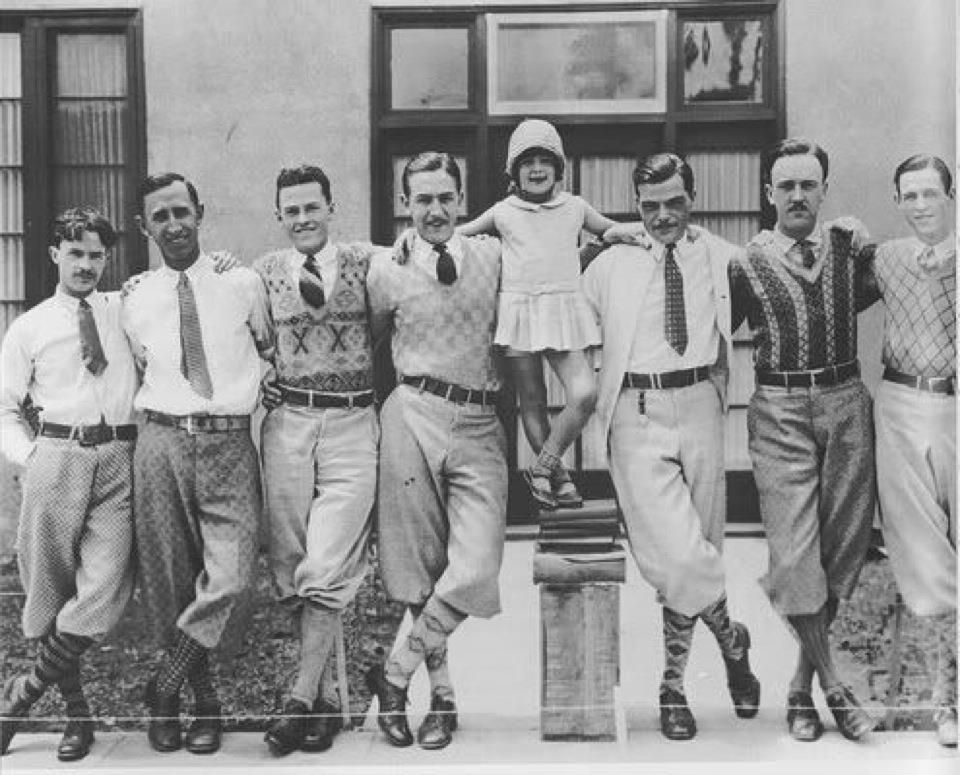 A style favored by many a 1920s sportsman, plus fours were a more comfortable than their ancestor, the golfing knicker, and were popular during the summer months. They were often paired with argyle or other loud-patterned socks. You know you want to wear them!

Too sporty…or not quite sporty enough? You could also wear Oxford bags, baggy flannel trousers which were also quite trendy, especially among young men.

Last but not least, the best part of a man’s Roaring Twenties outfit is arguably the hat. No man left home without his hat, after all. One of the most common types was the cloth flat cap, a staple of any man’s wardrobe. The other most common style was the straw boater, worn in the summer months by pretty much every male. Panama hats and derbies were also popular.

Now, if you’re going for a formal evening look, find a nice black tuxedo (the jacket should be single-breasted and long-ish, or else have tails). Make sure your white shirt is stiffly starched, and add a wingtip collar. A black or white bowtie, a folded handkerchief in your front pocket, and shiny black shoes will ensure you’re ready for a suave evening–and yes, shiny top hats are encouraged.

As far as styling your hair goes, the most typically 1920s option is slicking your hair back with grease (or something like grease–petroleum jelly will technically work in a pinch). You might assume you just need to scrape all your hair straight back a la Bela Lugosi in Dracula, but it was more typical to part your hair first, then comb it back. This will be easier if your hair’s a few inches long. Here’s some examples from both Picture-Play and Photoplay:

By the way, are you freshly shaved? Your typical 1920s man never seemed to stray far from a barber shop.

And about those 1920s mustaches that are typically part of a “Roaring Twenties” ensemble–try one out if you’ve got the face for it. Many men didn’t sport facial hair, but those that did had small, neatly trimmed mustaches that were often the width of their lips.

Alrighty! This was, of course, the briefest of overviews of Jazz Age fashion, but I hope it’s helpful. For even more detailed tips and ideas, I highly recommend these sites:

And I also recommend poking through vintage magazines on:

As well as looking through clothing and accessory advertisements via:

If anyone else has their own recommendations for vintage fashion sites, let me know! Have an excellent time putting together those Halloween costumes, everyone!