Skip to primary content
They shall grow not old, as we that are left grow old:
Age shall not weary them, nor the years condemn.
At the going down of the sun and in the morning
We will remember them.
–From “For the Fallen” by Laurence Binyon

.
After four years of the extended commemoration, we’ve reached the very tail end of World War I’s centennial (not counting 2019’s recognition of the 1919 Treaty of Versailles–don’t worry, WWI buffs, I haven’t forgotten). So it’s fitting that in these final days of 2018, the new war documentary They Shall Not Grow Old should be in theaters (limited numbers of screenings and all).

What’s also fitting, in my opinion, is that Peter Jackson is at its helm. He’s proved in the past that with care and preparation he can churn out stunning works like the Lord of the Rings trilogy (which has a practically transcendent effect on me to this day–by the way, that Hobbit trilogy doesn’t exist). They Shall Not Grow Old is an excellent addition to his filmography, and is certainly a milestone within the genre of war documentaries.

Jackson was doubtless over the moon when the British Imperial War Museum commissioned him to create a documentary in honor of Armistice Day’s centenary. A longtime WWI buff who grew up with stories of his grandfather’s time in the service, his personal collection of artifacts includes everything from actual soldiers’ uniforms to artillery to even aircraft. Faced with hundreds of hours of newsreel footage to restore, he was told only to find a “fresh and original way” to use the material.

When his first test restoration resulted in amazingly clear images, the idea behind They Shall Not Grow Old took shape. Since the restored footage brought people from the past so vividly back to life (“it looked like it was shot now”), Jackson decided to create a detailed portrait of soldiers’ lives in the trenches with the goal of making that era–often described only in terms of dates and battle strategies–come alive for us today.

Touchingly, it is narrated entirely by veterans of WWI. Jackson and his team combed through 600 hours of audio interviews taken in the ’60s and ’70s, weaving together the reminisces for a stream-of-consciousness effect. By the end of the film, we’ve taken in a vast wave of memories of everything from the awkward training period, to the camaraderie among the soldiers, to arrival in the trenches, to uniforms, food, sleeping arrangements, vermin, battle wounds, “going over the top,” mustard gas, the sight and smell of death–even such pragmatic memories as what to do when nature called (shallow trenches were involved). The voices are matter-of-fact and dryly witty, and it’s eye-opening to note that not once do any of them sound self-pitying. In one veteran’s words: “We were just doing a job, if it came it came.”

When Jackson began exploring how to adapt J.R.R. Tolkien’s mammoth Lord of the Rings novels to film, he and his team decided early on to respect the Catholic perspective woven through the stories. Jackson stated in an interview: “We made a real decision at the beginning that we weren’t going to introduce any new themes of our own…We were just going to make a film based upon what clearly Tolkien was passionate about.” He has a similar respect for the veterans’ experiences in They Shall Not Grow Old, allowing them to literally speak for themselves without introducing any particular political slant. Their personal memories of the trenches, concerned with lice, rats, and constant exploding shells rather than grand battle strategies made from afar (“All we knew is what we could see in front of our eyes,”) have the center stage, and give you a greater understanding of the war’s personal cost than any textbook could hope to teach.

The colorized sequences and “normal” speeds do half the job of making the footage seem immediate–the other half are the impressive sound effects (some made when using actual WWI artillery) and voice acting. While in the theater, I suspected that Jackson and his team had taken their attention to historical accuracy to a certain impressive level. And indeed, the “making of” documentary at the end confirmed my suspicions–whenever possible, they had researched which British regiments appeared in specific shots, what towns and cities those regiments were from, and hired voice actors from those specific areas so the various British accents would be accurate. No hasty, slapdash project was this.

There are a few moments when narration is paired with closeups of soldiers, giving the unintended illusion that those were “their own words”–although this can be attributed to being conditioned by decades of Hollywood tropes. And there are, perhaps, a few times when the color appears to have a bit of stylization to it–as if a sepia tone was trying to creep in. But these are small quibbles in my view. I feel the images will also look excellent on our smaller TVs, where the images will appear even sharper.

There are a couple concerns that I can sense reverberating from a few corners of silent film fandom. It’s important to know that about half the documentary footage in this film is colorized, the rest being in crisply-restored black and white (and enjoyable on its own, as well). The colorized footage, slowed to real life speed and enhanced with sound effects and voice acting (and widescreen), is not presented as a mere gimmick. Nor is it merely an attempt to appeal to a younger, black-and-white-phobic crowd, as I’m assuming a few will suspect (not that this is an unreasonable fear). Only being used for the scenes in the trenches and battlefields, it’s intended to throw us into an immersive experience, one that looks and sounds as real as possible.

Another concern I sense is that They Shall Not Grow Old is encouraging “tampering” with old footage rather than simply restoring it, as if the release of this film will cause legions of film restorers to run to negatives of Metropolis and The Gold Rush as fast as they can and start slapping on color and slowing the film speeds with careless abandon. Well, no. Jackson has said that he doesn’t believe his process should be applied to silent shorts and features, but rather as an interesting way to refresh some (not all) documentary footage. He emphasizes that newsreel cameramen in the 1910s, if given a choice between crisp black and white film and color film, likely would’ve gone with color–it simply wasn’t available yet. I lean toward being a purist when it comes to silents myself, but I’m fine with an occasional experiment when it comes to actuality footage.

And lastly, some are concerned about disdain for “inferior” scratchy, jumpy black and white footage, which in fairness is what various previews of They Shall Not Grow Old seem to imply (never mind that scratches and jumpiness aren’t original to the films). Will audiences become less tolerant of old films once they’ve seen how “modernized” they can be? 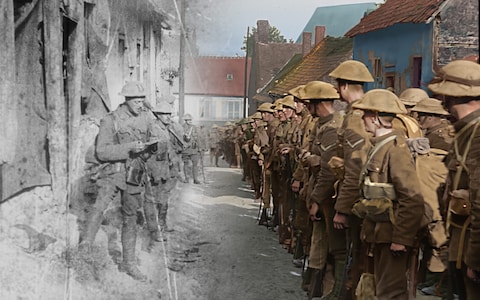 I would argue: Why can’t the opposite be true? Once they’ve seen how century-old footage can be restored to clarity, audience members unfamiliar with silents beyond battered clips may actually have a renewed respect for them, knowing all the scratches conceal crystal-clear images. They will also have a far greater understanding of how time can damage old film reels. Projects like this may very well aid film preservation efforts, rather than detract from them.

They Shall Not Grow Old closes with some sobering reminisces—once home from the battlefields, veterans contended with a world-weary public who had little understanding of what they’d been through. This is when you realize that Jackson’s immersive film has, paradoxically, left you with a greater understanding of the trenches than society had in the 1910s. It’s a remarkable experience, and certainly a labor of love. If there’s a screening anywhere near you–there’s at least one more Fathom event on December 27th–go and take it in.