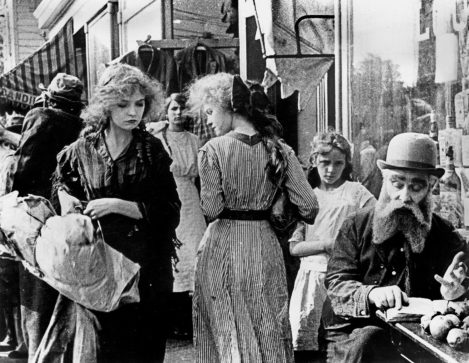 The 18-minute Biograph short wasn’t the first to depict crime, of course (a number of early films did, such as A Desperate Encounter Between Burglars And Police, 1905), but it’s the best and earliest surviving prototype of a gangster film. All the familiar notes are there: the introduction to the “dark underbelly” of a city, the charismatic crime leaders, the tough dames, and the crowded, rundown neighborhoods. The hardboiled gang members slinking through deserted alleyways and Lillian Gish’s character giving Elmer Booth a disdainful slap all have their echoes in film noir.

Publicity by Biograph said the film was meant to “show vividly the the doings of the gangster type of people…this picture shows the situation as it is, and the extreme necessity for radical action on the part of the authorities.” Its realism is impressive for its brief running time, with its claustrophobic shots of alleyways thronged with people of all ages, and old tenement buildings where cigarette butts get tossed onto the gritty hallway floors.

Screengrab by Alex on Film.

“New York’s Other Side” isn’t just that “dark underbelly” of course, but also the honest, working class poor, symbolized here by Lillian Gish (“The Little Lady”) and Walter Miller (her husband “The Musician”). Their apartment is small and plain, but clean, and they struggle to make a living while taking care of the girl’s invalid mother. Both are unjustly affected by the criminal underworld; their plight must’ve resonated with many viewers as they crowded into the nickelodeons.

The Musketeers of Pig Alley is most famous for its shots of the showdown between the rival gangs, particularly the tight closeup of Elmer Booth’s face as he creeps carefully along a brick wall. The framing has a hint of avant-garde that Eisenstein would envy. It’s one of Griffith’s finest parallel-editing sequences, paced slowly, but heavy with building tension.

Elmer Booth as the “Snapper Kid” is one of the film’s highlights, already having the tough features and cocky humor of the film gangsters that would appear 20 years later–you can almost hear Cagney’s voice when he talks. Booth passed away in 1915 after being in a car that hit a freight train (the car was driven by Tod Browning); had he lived, he would’ve been cast in Intolerance.

Aside from the performances and sophisticated camerawork (especially for a film made the same year the Titanic went down), The Musketeers of Pig Alley is also a classic for its complexity. Corrupt authorities are apparently a problem along with the gang culture. The Snapper Kid is dangerous but also likable, rescuing “The Little Lady” from an ugly situation. She later prevents his arrest since “one good turn deserves another.” Even the shots of the teeming Pig Alley suggest there are stories there beyond the criminal element, as passersby grumpily jostle each other, a little girl gazes thoughtfully at the camera, and an old man happily peruses a book. 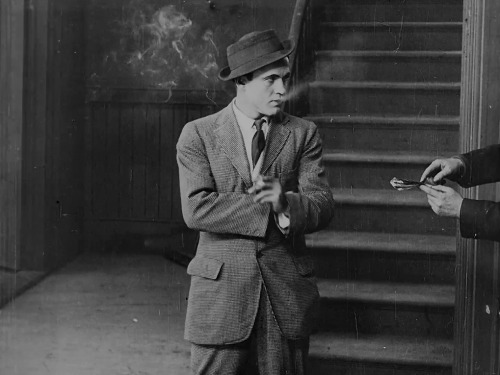 Of the multitude of Biograph shorts–and many of them are classics–The Musketeers of Pig Alley stands out. A must-watch for fans of crime films (or even just film in general), it’s a sophisticated and finely-directed early work that arguably set the stage for the tough-talking Bogarts and Stanwycks to come.