And now that my new laptop is up and running, we’re finally back in business! I’ll try and get some extra posts out this month, too. 🙂

Some of the silent era’s finest gems weren’t big epics or artsy Expressionist dramas, but smaller, quieter pictures, set in modest parlors, humble tenements, and kitchens where a full tea kettle was always sitting on the stove. Intimate melodramas like True Heart Susie (1919) or Master of the House (1925) gently examined the most relatable and engrossing stories of all: the triumphs and travails of “regular folks.”

And people loved those kinds of films back then, too. While largely forgotten today, Over the Hill (1920) and Tol’able David (1921)–melodramas with intimate storytelling and salt-of-the-earth characters–were two big hits of the era. Actors like Charles Ray made careers out of “gosh and golly” personas, and after filming his mighty epics D.W. Griffith was happy to turn his attention to “little” pictures like A Romance of Happy Valley (1919) and The Greatest Question (1919). Many of these dramas that survive can still captivate us. After all, as spoiled as we may be by high-quality CGI, brilliant colors and swooping camera movements, we still can’t resist a plain good story. 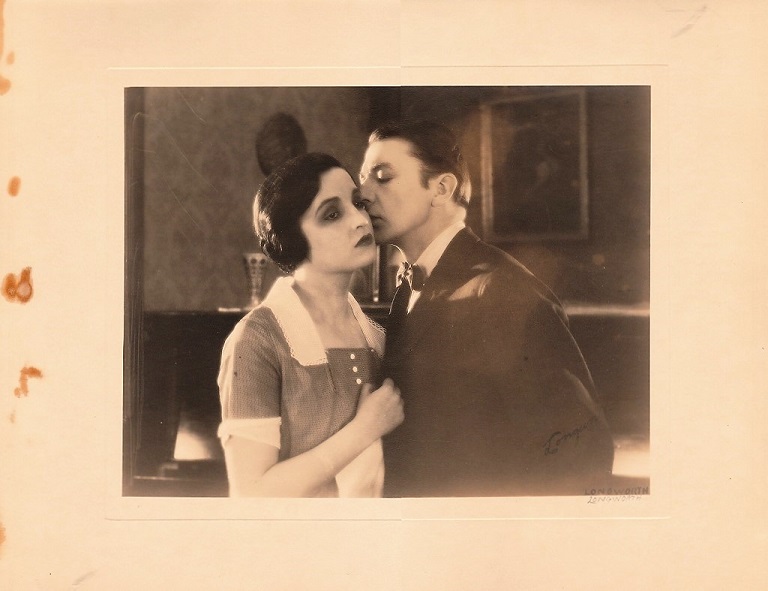 A particularly fine example is The Home Maker (1925), starring Clive Brook and Alice Joyce, based on a novel by Dorothy Canfield Fisher. It’s a film many of us can relate to: an ordinary, middle-class family struggles to get by amid the stress and tension of the daily grind. The father, Lester, is unhappy with his middling job and fails to get a much-needed raise, while the mother, Eva, obsesses over keeping a perfect house while being irritated by her bratty younger son. Their three children suffer from the tension too, one of them apparently getting bouts of psychosomatic illness.

One night, the house next door catches fire. As Lester tries to help put it out, he makes a fateful decision. After the tragic accident that follows, Lester is confined to a wheelchair and unable to work. Thus, a role reversal is forced to occur: Lester stays home to watch the children, while Eva gets a job in a department store.

The new arrangement–not the norm in that time period–turns out to have unexpected blessings. Patient, observant Lester has a wonderful time looking after the children, while Eva proves to be a whiz at making sales. As both parents thrive, happiness and harmony in their home is restored–even the stubborn youngest son becomes more calm and affectionate.

Ah, but that’s not quite the end–one more twist is in store for the family. Is the new arrangement, after all, only temporary? Or should extra sacrifices be made?

The Home Maker was a Universal Jewel production–that is, one of Universal’s “prestige” pictures, the cream of its cinematic crop. Watching it today, we’re tempted to analyze it solely in regards to how we imagine 1920s audiences must’ve reacted to the gender swap theme. We’re certain that in those days, such a film must have created a stir, somewhat akin to the buzzing of angry hornets.

For instance, the San Francisco Silent Film Festival’s program essay for The Home Maker (shown at the festival earlier this year), posits that it was a “miracle” the plot wasn’t handled the wrong way (the gender swap played for laughs, for instance), and expresses some surprise over King Baggot’s sympathetic interest in the plot. The essay also states that “Given such rigid conventions, one might expect to find more evidence of movie-sparked controversy” before admitting “Whatever spirited discussions The Home Maker provoked have been lost to time, and the contemporary critics contented themselves with describing the film as ‘unusual’ in their mostly positive reviews.” 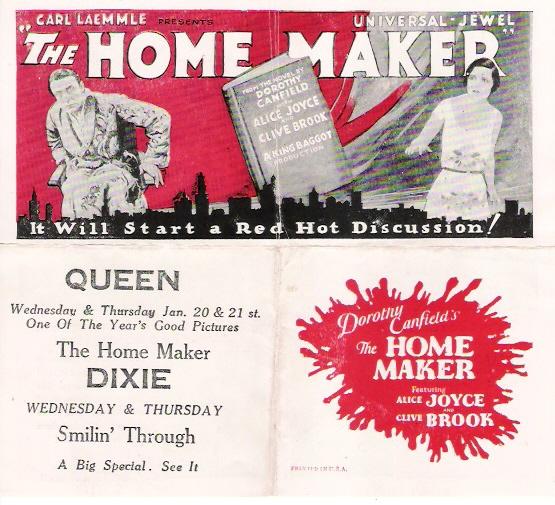 I might posit that The Home Maker, while it had a fairly daring plot for a 1920s drama (although role reversals themes weren’t unusual in comedies), was perhaps not as shocking to audiences as we might think–or as Universal’s publicity department probably hoped.  It doesn’t have the feel of being agenda-driven, but story-driven. If we examine contemporary reviews, it generally was very positively received, the role swap theme made relatable by its vivid characters and clear cut situations. As the New York Daily Mirror put it, it seems like a “wistful, human fragment from life.”

Indeed, the “relatable” aspect, helped by Brook and Joyce’s subtle performances (as well as little Billy Kent Schaeffer’s amusing role) seems to have been key to The Home Maker‘s success. For instance, the Iowa paper Davenport Democrat and Leader said “It is one of those rare pictures that turns tears into laughter and laughter into tears…In The Home Maker we see people that we all know.” And according to the Cedar Rapids Gazette, “Those who see The Home Maker…will say that it is just the sort of a picture that brings before them incidents that have happened or could have happened, in their own homes,” adding briefly, “It surely is a picture that presents food for thought.” 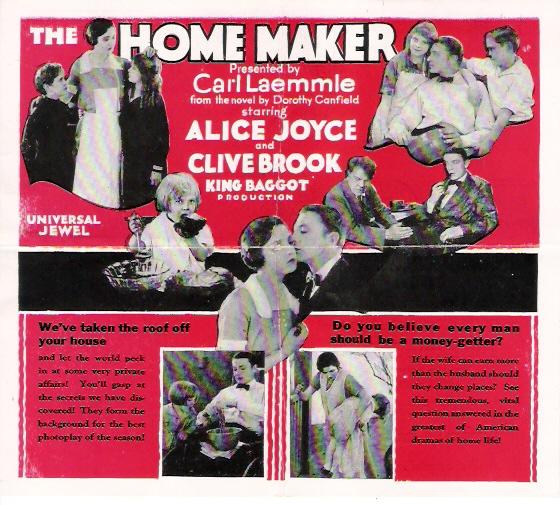 Critic reviews were also quite warm. New York Graphic, while having some doubts about the ending, still called it “an artistic triumph…King Baggot can well pat himself on the back for his directing this picture.” New York American described it as “a study in realism not often seen on the screen,” and Chicago Examiner declared “Universal can stick a feather in its hat for this picture.”  And Moving Picture World proclaimed it “really wonderful in the simplicity of its story and settings and acting…a perfect emotional unit from start to finish.” Significantly, it also deemed The Home Maker “the sort of clean, wholesome, gripping domestic drama which will do the reputation of the whole industry a world of good.”

And it’s notable that Dorothy Canfield Fisher herself was very pleased with the film, saying: “I came away from that performance of The Home Maker with a satisfied feeling that my book, difficult as it must have been to screen, had received as complete and faithful a rendition as could be possible.”

I’ve always been drawn to intimate, character-driven stories, with glimpses of those well-used kitchens and front porches from a time gone by. The Home Maker drew me in like a magnet. Brook and Joyce might not spring to mind as your first choices to play an ordinary couple (Brook in particular is quite aristocratic looking) but they deliver beautifully–especially Brook, whose tragic character ends up being one of the most endearing father figures I can recall from a silent film. And aside from the intriguing gender role theme, the timeless problems of unhappiness in the home, struggles with finances and anxiety about the future should hit home to nearly anyone.

I was fortunate to see this gem at this year’s San Francisco Silent Film festival, where it was apparently shown on Kevin Brownlow’s recommendation. It’s not currently on DVD, but I’m hoping (and even praying a little!) that it will make its way to our film library shelves very soon. 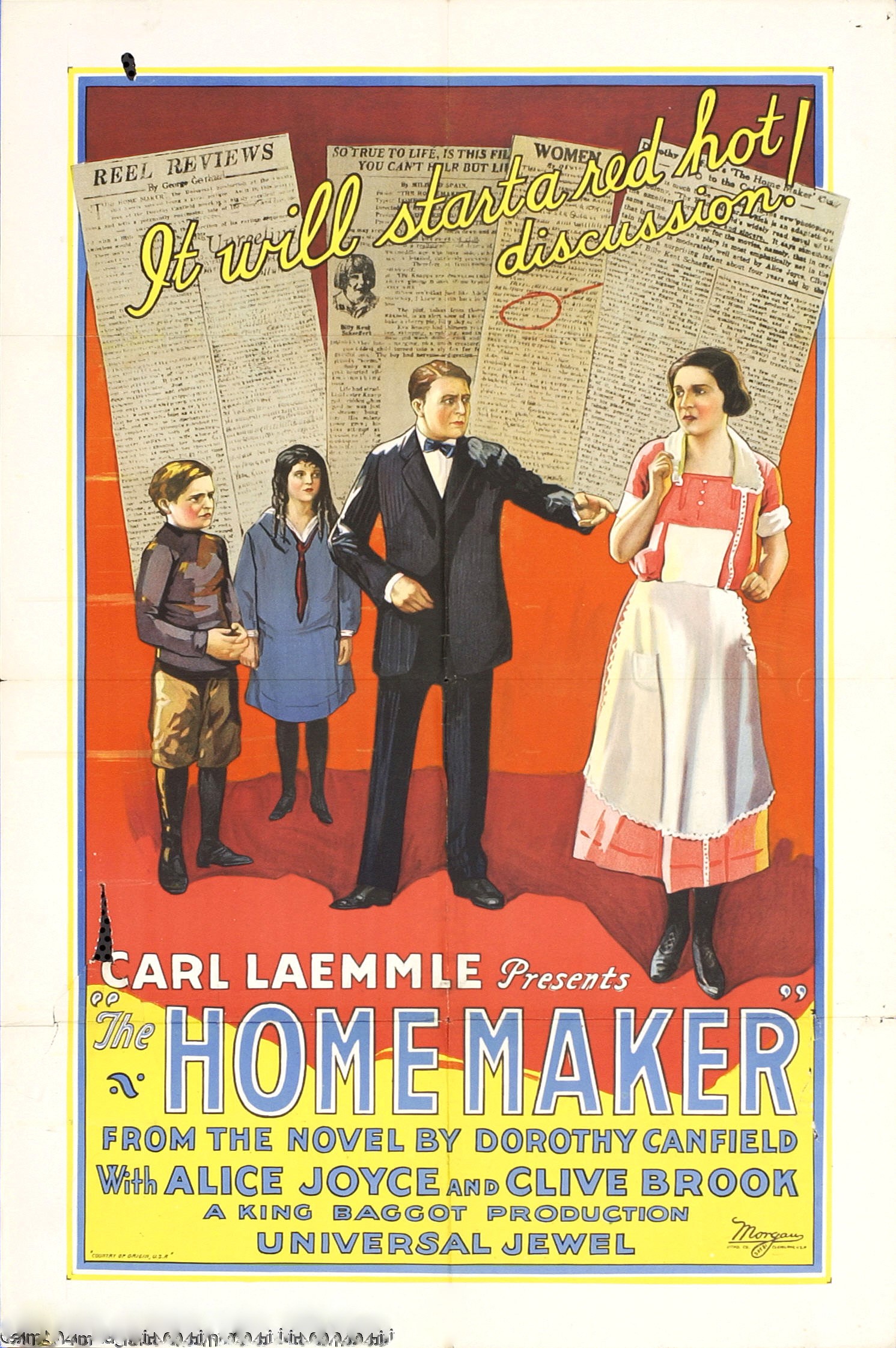 The two black and white stills are courtesy silentfilm.org. Lobby card images and the two herald images are from historian Greta De Groat’s helpful webpage on The Home Maker: https://web.stanford.edu/~gdegroat/AJ/reviews/homemaker.htm