Obie, as he was nicknamed, was a restless young man from southern California who had drifted through a series of jobs, from sports cartooning to professional boxing to being a brakesman for the Southern Pacific Railroad. One experience that had stuck with him was acting as a guide for a group of paleontologists. Watching them examine the Crater Lake area for elusive dinosaur fossils fascinated him, and this interest would prove key to his later career.

He eventually ended up in a marble sculpting shop where he sometimes made clay models. Being an avid film fan, it occurred to him that he could animate these models on film. Excited by the possibility, he rented a little shed on the roof of a San Francisco building and started experimenting with a hand-made brontosaurus model. One way or another, he just had to bring these fascinating prehistoric creatures back to “life.”

Obie’s first complete short was The Dinosaur and the Missing Link (1915), a five-minute short about four cavemen that took him two months to complete. Its success lead to Birth of a Flivver (1916) and several other “Stone Age” shorts, one of the most interesting being The Ghost of Slumber Mountain (1919). But short films weren’t enough for the ambitious young animator–since its publication in 1912, he’d been obsessed with Sir Arthur Conan Doyle’s sensational novel The Lost World. In a sense, the years of painstaking work were preparation for his dream project, a feature-length adaption of the classic adventure story.

His employer Watterson R. Rothacker had the film rights to Sir Arthur Conan Doyle’s work (one wonders if Obie purposefully worked for Rothacker because of that!). He agreed with Obie that a feature film of The Lost World would be a very exciting project, and thus, work on the ambitious monster movie began at the Brunton Studio in Burbank.

Chosen to be the (human) leads were character actor and frequent screen villain Wallace Beery, gentlemanly Lewis Stone (later Judge Hardy in the Andy Hardy films), wholesome actress Bessie Love and the clean-cut Lloyd Hughes. The real stars of the film, of course, were Obie’s dinosaurs, which he animated in a small studio away from the main stages.

He diligently worked on around 50 model dinosaurs–even today this is a lot of puppets for one stop motion film. With the help of assistants Marcel Delgado and Ralph Hammeras, Obie designed ball-and-socket skeletons for his models, overlaid them with rubber muscles (for more realistic movements), and used latex rubber for the exteriors. As a final life-like touch, small bladders were placed in the chest areas of the creatures to simulate “breathing.”

The miniature jungle sets were about six feet long and five feet wide, lit by Cooper-Hewitt mercury vapor lights. (Some of the decor was made by sowing grass seed, which grew quickly under the lights.) The largest set, which would feature an impressive dinosaur stampede, was 150 feet long and 75 feet wide. It took Obie and his assistants a painstaking 960 frames of film to achieve one minute of stop motion footage–truly herculean effort–and temporary walls were put up around the set being used to ensure complete solitude and concentration. On top of all that, the models experienced frequent wear and tear and by the end of a long day’s filming had to be repaired for next day’s work.

Some of the wear and tear.

The result, while it can appear a bit crude today, was groundbreaking in its depiction of dinosaurs as energetic and fast-moving (instead of lumbering and sluggish). Obie had a remarkable eye for giving his prehistoric beasts believable, animal-like behavior, and his animated sequences are full of inspired touches like the tail of an edmontosaurus rippling while it dies, or a triceratops nuzzling her baby offspring after fending off a predator. And, in a prescient move, he makes it clear that the explorers are safer while observing the plant-eating dinosaurs, just like Jurassic Park would decades later.

The scenes of humans and dinosaurs in the same frame were difficult to do, but are surprisingly well done, involving careful use of matting. One standout scene shows an allosaurus sneaking up on the explorers’ campground. They open fire and throw a flaming log at the creature–who catches the log in his (rather slobbery) mouth.

As a whole, The Lost World is a fairly faithful recreation of Conan Doyle’s novel, with some inspired additions. While in the novel it was a pterodactyl that confounded London, in the movie a full-grown brontosaurus rampages through the city, in a highly-original clash of the ancient and the modern–it set the standard for umpteen monster movies to come. 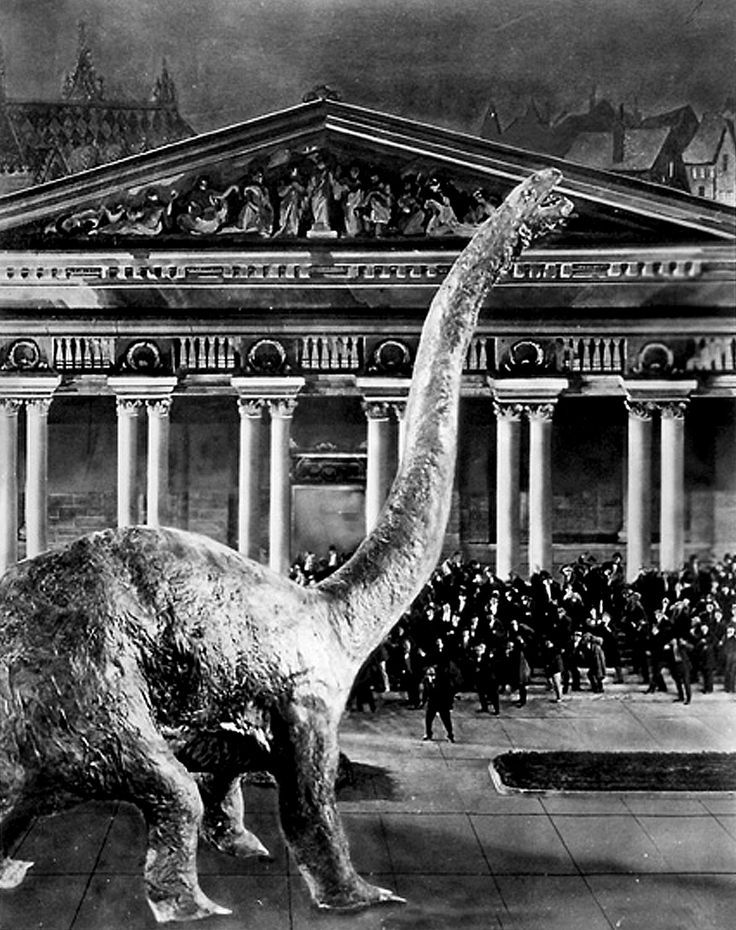 There are some clumsy moments–especially when the head of a surveying expedition, who we’ve never seen before, simply walks into the frame just when the explorers need him–but overall it’s a good-looking thriller (thrilling, that is, in its 1925 way) that revels in its exotic locations. I love the lush shots of the miniature jungle, which have the exact dreamlike quality we might recall from our own imaginations while we were reading classic adventure stories.

The Lost World was a resounding success, in both the U.S. and abroad. Sir Arthur Conan Doyle himself gave it his stamp of approval, both by briefly appearing in the beginning of the film and by showing some of the footage to the Society of American Magicians in New York (boasting it was a kind of magic that would make their illusions seem “tame”). There had never been a feature quite like it before–and it no doubt transfixed an entire generation of children.

Obie’s followup to The Lost World was originally a similar film called Creation, but when RKO put the kibosh on it, he used his ideas for an even bigger picture: the one and only King Kong. And we all know how that turned out!

There’s a fitting coda to the production of the ambitious The Lost World, which Obie himself would probably find amusing. Several of the original dinosaur models were donated to the Museum of Arts and Sciences at Exposition Park in Los Angeles, where their latex skins slowly began to deteriorate as the years went by. Put into storage, they were accidentally walled up when a new wing was added to the museum. I’ve heard that a few models (mostly surviving as metal skeletons) have been “rescued” since then, but there may be more still waiting to be uncovered–rather like those lurking dinosaur fossils around Crater Lake that had fascinated O’Brien all those moons ago. 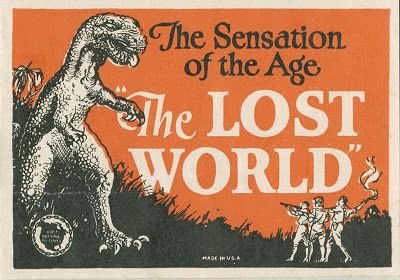 My main source for the articles in Silent Stop Motion Month is the wonderful book A Century of Stop Motion Animation: From Melies to Aardman by Ray Harryhausen and Tony Dalton. Highly Recommended!