Let’s consider the year 1915. Civil War films had been plentiful and very popular in the 1910s, especially once they coincided with the 50th anniversary of the war (obviously one film was a tad more successful than the rest). Both the Northern and the Southern points of view were represented in various films–The Coward is the tale of a Confederate family.

Honor was important in 19th century America, but apparently, nowhere was it more important than in the South. Handed down from the traditions of Scots-Irish herdsmen and farmers, honor was an unquestioned part of life, whether you were wealthy, poor, or middle class. People expected each other to be sociable, upstanding and hospitable, and men to be willing to defend their honor at a moment’s notice–whether with fists or, at times, even with an honest-to-goodness duel (duels only declined after the Civil War). The old Southern honor culture would’ve been common knowledge to people in the early 20th century–it’s the key to understanding the masterpiece Tol’able David (1921) and spoofs like Buster Keaton’s Our Hospitality. 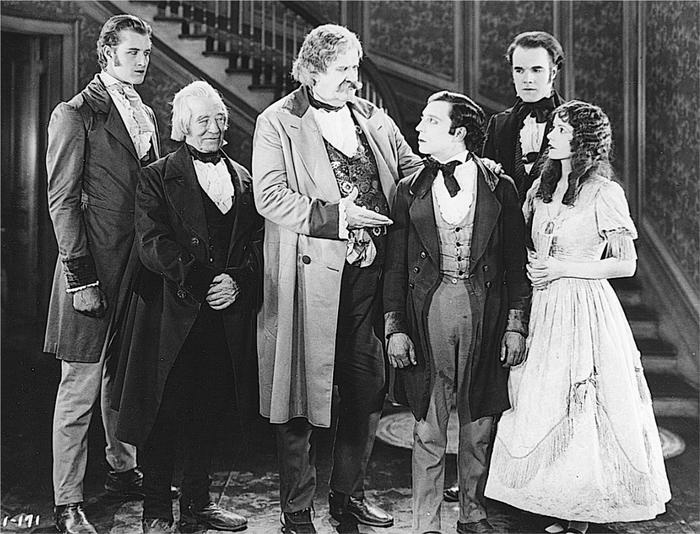 The Coward tells the story of the small, genteel Winslow family, whose distinguished patriarch is a proud retired colonel. When the Civil War is announced he immediately volunteers both himself and his only son Frank for the army. He’s rejected due to his age, but he’s confident that the son will carry on the family’s military tradition.

Unbeknownst to him, sensitive Frank is frightened by the idea of going to war; while waiting to enlist at the recruitment station, he loses his nerve and flees. This cowardice comes as a shock to his both parents, but especially to his father. A Winslow couldn’t possibly be a coward–a Winslow would not be allowed to be a coward. Transfixed by shock and anger, the gentle wife unable to soothe him, the colonel finally tells her to go and beckon the son into his study. While alone, his quietly loads a pistol.

The story doesn’t end there, of course, but the scene is one of the film’s standouts. Today it comes as a shock. We assume the father’s merely holding his son to an unrealistic standard, and we can’t help pitying Frank and wondering how a parent could be so cruel. The true undercurrent of the colonel’s motivations, however, is the all-important preservation of the family honor. We might still have a hard time sympathizing with the colonel, but we at least have a glimpse into his point of view.

The colonel was played by Frank Keenan, a distinguished Shakespearean actor known for King Lear and The Girl of the Golden West. The Coward was his first appearance in films, and at first glance his acting appears, shall we say, dated. His performance is clearly flavored by his stage work, where it was still common to express emotions with specific poses and flourishes. He expresses the stern colonel’s anger by standing still and rigid, almost catatonic from fury, a posture he repeats several times throughout the film. Yet I found myself getting absorbed in his performance throughout each long take, searching the face for any signs of softening, trying to pick up on clues of what’s running through his mind. Stylized though his acting may be, Keenan delivers some of the most memorable scenes I’ve seen in any 1910s film–and that style, especially when echoed by the other actors, makes for some masterful vignettes.

Another standout scene occurs after Frank is forced to enlist. But fear can’t be quelled that quickly–soon he deserts and creeps back home, where his mother and their servants instantly begin dreading what will happen when the colonel finds out. A second confrontation happens, of course. Frank stands dejected, a pathetic figure, and the colonel’s wrath is so intense we can’t decide if he’s going to strangle his own son or even have a heart attack. But instead he breaks down and weeps, as the mother watches with large, frightened eyes.

Gertrude Claire plays the mother, and what an endearing presence she is. A stage actress since her teens, she started working in films in New York City then headed west, acting steadily in Hollywood features until her death in 1928. With her frilled hoop skirts and dainty hairstyle, physically much shorter than her husband and son, Claire’s mother in The Coward is nonetheless the merciful glue doing her best to hold the tense family together. We notice that she tacitly accepts the importance of honor, even as she endures its consequences more keenly than anyone else.

The two servants are played by Nick Cogley and Minnie Devereaux, both in blackface–not uncommon in the days when it was assumed actors could of course play any character if they had the right makeup kit. Cogley was the veteran of countless comedy shorts, including numerous Keystones. Devereaux had Cheyenne and Arapahoe heritage and specialized as a character actress–she was sometimes billed as Minnie Ha-Ha or Minnie Provost. The servants are, mercifully, played less to stereotype than some blackface characters, and their parts in the plot are a little reminiscent of Gone With the Wind.

After Frank deserts, the colonel decides he must take his place–after all, “the name of Private Winslow is on the rolls: someone must answer when that name is called.” While he’s away Union officers enter the Winslow home, demanding hospitality. Frank, his fear rising again, hides in the attic. Overhearing the officers’ battle plans, “the shadowy hands of past generations of fighting men shatter the fetters of cowardice,” and Frank finally decides he will take action.

The now-obscure Charles Ray has the title role. In 1915 The Coward was touted as a Frank Keenan vehicle, but it’s telling that we consider it a Charles Ray picture today. Growing up in Indiana and then California, his sister encouraged Ray to study acting, and he eventually started working for Thomas Ince’s studio. The Coward made him a star, and he would grow to specialize in bashful country lads whose mettle is tested–usually by the big city. Appealingly boyish, few other actors could play those types of roles with his style of naturalness. He would famously lose a fortune in 1923 with his self-financed The Courtship of Miles Standish and never regained his stardom, but the youthful actor had an amazing run of success in the 1910s.

The print of The Coward is gloriously, miraculously crisp. That clarity, combined with the sepia toning, period-accurate costumes, and well-lit sets, give the characters the appearance of daguerreotypes come to life. The battle scenes, while on a smaller scale than something like The Birth of a Nation, also have compelling realism right down to the soldiers’ uniforms becoming dusty and torn. Not only was I completely drawn in by the gripping story, but I found it all a treat for the eyes as well.

Today The Coward is partly remembered for being a possible inspiration for The General, as Kevin Brownlow has pointed out. The Coward was a popular film and could’ve been remembered by Keaton, and there’s certainly similarities in the recruitment scenes and the scenes of overhearing secret battle plans. Both heroes also have to prove their honor, and both disguise themselves in the process. I think there’s also enough differences to make the case that similarities might’ve been unconscious on Keaton’s part–or maybe someone on his crew remembered the film.

The Coward is available on the set Civil War Films of the Silent Era and floats around on YouTube, too. I first watched it on a whim, and came away stunned. It’s a marvel, a blend of old-fashioned acting and modern naturalness, illustrating a foreign concept in a way that makes it come alive for us, well over a century later.