‘Tis Hallowe’en, and may an abundance of spooky, autumnal fun be had by all! In the spirit of the season I’m sharing this essay from the November 1920 issue of Photoplay, mainly for the author’s reminisces about childhood Hallowe’ens, but also to remind us that we simply don’t write gentle, moralizing essays like this anymore.

Sangster was actually the granddaughter of the warm, philosophic poet and writer Margaret Elizabeth Sangster, who had passed away in 1912. The younger Sangster was given her own column in Photoplay in the summer of 1920, where she shared her thoughtful look on life. Since she wrote this in 1920, her childhood probably took place around the 1900s–the Meet Me in St. Louis era, if you will. Feel free to give it a read–you might find its message surprisingly timeless! Illustrated throughout with Hallowe’en imagery from those days of “magic and mystery.”

A heart to heart talk with the Family Circle 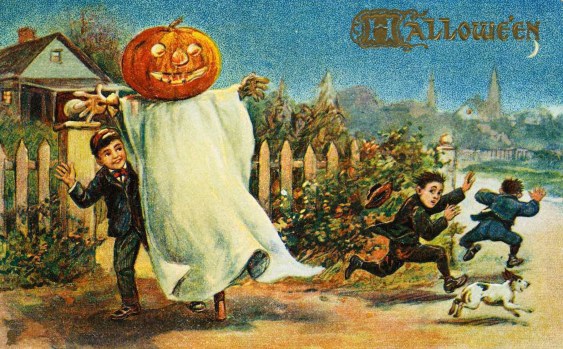 I remember the Hallowe’en parties I used to go to; not conventional parties–in the real sense of the word–not the sort of parties that made starched white frocks and blue sashes and squeaky shoes and ultra clean hands at all necessary. They were cordial, informal parties and one went to them cordially and informally robed in gingham–often faded gingham–and barefoot sandals, like as not. 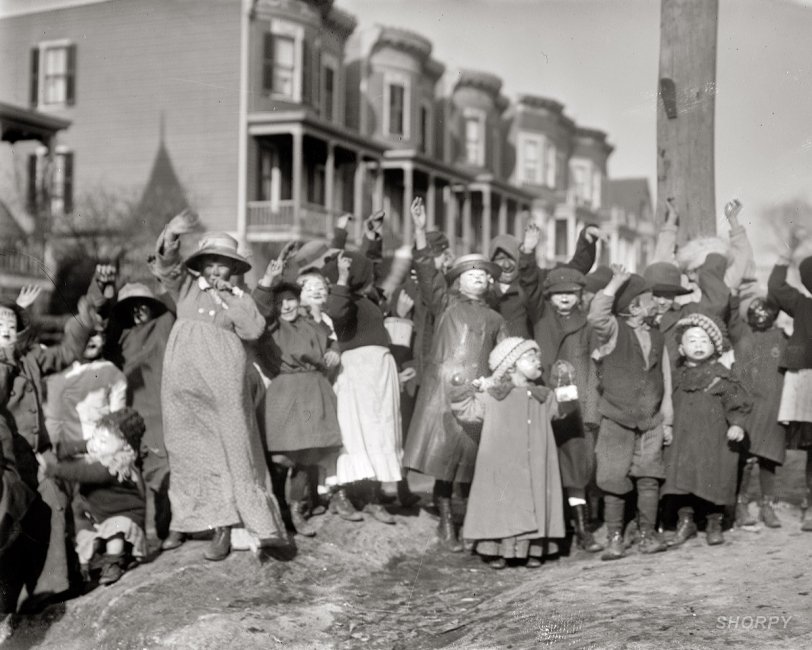 The games played at Hallowe’en parties were not polite games, either. They were more or less rough and tumble–more or less hit or miss. We weren’t interested, somehow, in the lady-like games of “Drop the Handkerchief,” and “London Bridge” and “Here We Go Round the Mulberry Bush.” We played “Blind Man’s Bluff,” and “Old Witch,” and “Tag.” And then, when every other game was exhausted, we bobbed for apples. And that, somehow, was the crowning point–the climax–of the party.

Who hasn’t bobbed for apples? Everybody, I reckon, who has had a real childhood has known the fun of seeing a great wooden tub filled with water and floating with red fruit. And everyone, with his hands held tight behind him, has ducked into the tub and tried to capture an apple in his eager white teeth.

Curiously, there was never any cheating in the game of bobbing for apples. If a child could not capture the wary prize he retired laughingly to the ranks–and another child took his place. No youngster–that I can remember–ever tried to encourage the apple with his fingers. He came up with his eyes and ears and mouth full of water–but he came up good-naturedly!

And then, once in every score of chances, some kiddie would get an apple. He usually got it after hard and desperate bobbing–but he got it. And when he did the others would clap their hands in whole-hearted appreciation and would show, by their unclouded faces, that they were not in the least bit jealous of his prowess. There were no whisperings of–

“It was only luck!” There were no sneers–and no raised eyebrows.

One cannot help wishing that folk were like that in the big game of Success. For, after all, the game of Success is not unlike the fame of Bobbing for Apples. And we who long for some heart’s desire, that spells success to us, are like eager children–with much of the naivete, and often the good sportsmanship, of childhood left out!

We gather around a tub filled with water–we grown-ups. And the water is bitter with the salt of tears–tears that were shed for a broken dream or a disappointment; and floating upon the water are the apples of desire. Ad some of them are labelled “Happiness,” and some are marked “Money,” and some are tagged with the label of “Fame.” And we watch the particular apple that we want with wistful eyes; and often we crowd forward, not waiting for our right turn. And when we do that there is confusion and chaos. And oftentimes heads are bumped and nobody gets anything–not even a bite of the fruit!

The pity of it is that the ones who fail in the game of Success–who come up with ears and eyes and mouth full of nothing but water–do not retire laughingly to the ranks. The pity of it is that sometimes they try to cheat–that sometimes they endeavor to win by using methods that are barred out of the game. And the greatest pity of all is the fact that the ones who win are sometimes sneered at by the crowd–that often whisper of–“Oh, for his luck!” follows the victor as he bears away the fruits of victory.

It’s like that in every field–in art and music, in poetry and business, on the stage or on the screen. Folk are often too ready to discredit the winners–often too anxious to reach their own victory by any method at all. They are too willing to take another’s place, to crowd forward. And they are too anxious to dig out some hidden fact, some unpleasant secret in the life of those who have won.

The children at a party are seldom jealous of the one who wins the prize. Neither are they anxious to believe that the winner was unskillful or a cheat. They’re much more apt to be wholeheartedly glad when somebody comes out ahead.

The heart of a child is something to be desired by the wise man or woman. The soul of a child is a priceless treasure to be guarded against the world. And the ability to play games as a child plays them, is one of life’s greatest gifts!