Love cinema, especially obscure cinema? So do I, obviously. I’m always on the hunt for all things quaint and curious, and aside from those random YouTube playlists, there’s one site in particular that has a fascinating library of free films that I highly recommend: The National Film Preservation Foundation’s website.

This foundation, as you suspect, does God’s work. As their site describes:

The National Film Preservation Foundation is the nonprofit organization created by the U.S. Congress to help save America’s film heritage. We support activities nationwide that preserve American films and improve film access for study, education, and exhibition…Our top priority is saving American films that would be unlikely to survive without public support. Over the past decade, we have developed grant programs to help archives, historical societies, libraries, museums, and universities preserve films and make them available for study and research. Our grants distribute federal funds secured through the leadership of the Library of Congress and preservation services donated by public-spirited laboratories and post-production houses. Congress increased the authorization for this work in 2005 and 2008. Every penny of these federal funds goes out to the field and we raise operational support from other sources.

Comedies, dramas, cartoons, documentaries, avant-garde, westerns–you can find a little of everything on the NFPF’s site, most films being from the early 20th century. Since it contains a good helping of silents, I thought I’d share nine of my favorite finds (so far). Think of it as suggestions for a DIY at-home film festival:

Starring Harry Myers and Rosemary Theby, the imagery in this light comedy is straight out of a comic strip. Outwardly, Mr. Cherub seems to be the perfect husband, even pictured wearing a tinsel halo, gliding about the house and serving his wife breakfast in bed. Of course, that’s just the side Mr. Cherub shows to the world–in reality he’s an obnoxious, womanizing brute. Unaware of this, the women in town want to make him the mayor. That is, until his reputation starts to crumble.

By the way, does Harry Myers ring a bell? That’s because he plays the drunken millionaire in Chaplin’s City Lights.

Released to capitalize on the popularity of dinosaurs thanks to The Lost World (1925), this documentary-style short uses a variety of animation styles to take us on a quick overview of prehistory (I liked those little floating trilobites). The stop-motion dinosaurs seem a little comatose next to the dynamic beasts from The Lost World, but the film still has a weird charm. Not a bad choice to round out a night of eclectic movie viewing.

If the title seems weird, I think it coyly means “Walk, Damn You, Walk!” Anyhoo, the plot concerns a young woman who goes for a drive with a young feller who gets fresh. Indignant, she ends up walking home. Her friends conspire to get even with the young man by tricking him into taking them for a drive, then making him walk home as they go for a joyride. Nitrate damage can’t conceal the mischievous energy of this short, probably filmed for pennies in outdoor locations.

The NFPF’s film notes say there was supposedly a “kerfuffle” at a theater during this film: “It seems that while watching Walk,—You Walk!, a group of girls so outraged a young man that he tried to hit one of them in the face. Fortunately a ‘country cop’ stepped in and ‘jerked him away so that he fanned the air.’ Now that’s a guy who can’t take a joke.” Since no one asked me, I looked up that exact review myself, and our Edwardian writer’s actually referring to a moment in the film, not a real-life kerfuffle (the moment seems to be lost). Anyhoo.

Because every program of obscure shorts needs a cartoon or two in the mix! This early work by prolific animator Paul Terry (later known for Terrytoons) follows a cat who falls in love with a stage ballerina, also a fellow cat. Told by a fortuneteller that he should go for it, he heads to the theater to try and proclaim his love. The animation is a bit crude like many early 1920s cartoons, but I like the expressive faces and body language of the characters. They reminded a little of those early Simpsons episodes.

I loved this one. Filmed in the aftermath of Hollywood scandals like the Arbuckle trials, this short shows a country bumpkin heading to Hollywood to witness the supposed cesspool of immorality for himself. Much to his disappointment, he sees only hardworking, squeaky-clean actors living quietly with their families. Stars like Max Linder, Owen Moore and Viola Dana make cameos, and we see glimpses of landmarks like the Pickford-Fairbanks studio and the now-demolished Hollywood Hotel.

All in good PR, of course, although some jokes are surprisingly bold, like the one about a star scoring coke–Coca-cola, that is. (Check out John Bengtson’s wonderful post on the filming locations here.)

I found this little documentary on “modern” chicken farms surprisingly interesting, with fine photography proudly showing off the “more scientific approach” to raising poultry. In contrast to the smaller, family-run farms, we’re shown large free-range chicken farms with thousands of birds pecking and scratching away in pastures. We’re also shown the latest things in egg incubators, coops, and brooding pens, full of hundreds of white Leghorns. While praising the scientific new poultry industry, the film takes the time to show chickens being chickens, roosting in low branches and feeding in a sun-dappled grove. Worth a watch.

Hear ye, hear ye, another Sennett comedy’s been restored! This one stars one of my favorite people, Louise Fazenda, and one of my favorite Sennett players, Chester Conklin. A slapstick farce with an emphasis on “slapstick,” it’s unabashedly silly and aims only to amuse. Some of the humor hasn’t aged super well–the main plot is a teacher being in a love triangle with two of his students–but it’s a good example of a basic “fill out the release schedule” comedy. This short in particular really shows off Louise’s knockabout skills, as she takes a number of surprisingly tough falls and smacking around. Few other comediennes went to such tough physical lengths, I dare say.

Though very short, this film snippet has an interesting history. A stencil-colored film (I love that early stenciling, such colors!), it was played in nickelodeon theaters as a chaser to the film program, a kind of patriotic grand finale. It was common to end programs with an image of a waving American flag, so the Edison studio took the image a few steps further. Audiences took to it so much that the original negative wore out after awhile, and Edison had to shoot a new one. Anyone can take one minute of their time to appreciate it, yes? 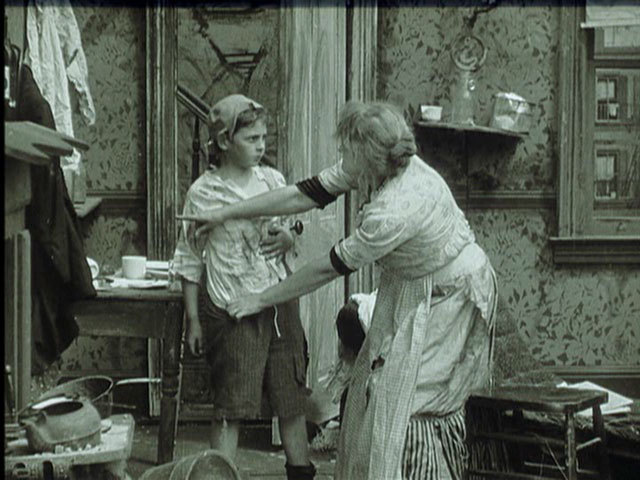 This melodrama has a surprisingly haunting ending. An impoverished young newsboy, abused by an alcoholic grandmother, gets to go on a picnic for underprivileged children. During the picnic the children are told a fairytale about a boy who escapes from an evil witch with the help of kindly fairies, and takes a boat “along the path of shining light, to the Land Beyond the Sunset”. The story makes a deep impression on the boy, with ambiguous consequences. I won’t spoil that ending, of course, but I’d like to know what you think.

Enjoy exploring the NFPF site–and feel free to share any gems you discover there on your own, too!

12 thoughts on “9 Treasures From The NFPF Site”