Alrighty! It’s time for the answers to Silent-ology’s first AMA, which a number of you kindly responded too. Many thanks!

I must say, you guys asked some really great questions–and a couple doozies! 😀 Which is grand–doozies are encouraged here. Without further ado:

What are your top 3 films by decade, going back to the beginning of cinema? (Yes, I’m including the 1880s.)

By “top” films, I’m guessing you’re asking what my personal favorites are from each decade–heck, that’s what I’m going with! (Man, just choosing three of my faves was hard. My poor brain.)

1880s – That’s gonna have to be Roundhay Garden Scene, and–that’s kind of about it, guys…!
1890s – Dickson Greeting, The Four Troublesome Heads, Fred Ott’s Sneeze
1900s – The Merry Frolics of Satan, The Great Train Robbery, The Country Doctor
1910s – True Heart Susie, Intolerance, The Butcher Boy
1920s – Man, this is a tough one–let’s go with The Kid, The General, The Passion of Joan of Arc
1930s – Mr. Smith Goes To Washington, Sons of the Desert, Angels With Dirty Faces
1940s – Fantasia, It’s a Wonderful Life, Arsenic and Old Lace (Are you detecting a Capra fan?)
1950s – Singin’ In the Rain (probably my all-time favorite movie), The Night of the Hunter, Sunset Boulevard
1960s – The Haunting, The Great Escape, Psycho
1970s – Star Wars, Aguirre the Wrath of God, Nosferatu: Phantom der Nacht
1980s – The Empire Strikes Back, Amadeus, Back to the Future
1990s – Toy Story, Ed Wood, Hook
2000s – Pirates of the Caribbean: The Curse of the Black Pearl, The Lord of the Rings trilogy (these count as one magnificent piece of cinema, mkay?), The Darjeeling Limited
2010s – They Shall Not Grow Old, Wonder Woman, Once Upon a Time in Hollywood

I have to say, the 21st century so far has been a fantastic era for blockbusters–of the “fanboys vibrating with excitement” kind. Lord of the Rings, The Dark Knight, the Harry Potter series, all those surprisingly well done Marvel movies–it’s been a fun ride, folks. Even the new Star Wars trilogy was at least exciting to look forward to (don’t get me started on how it could’ve been so much better, though!!).

How do you feel about color-tinted, hand-painted silent film?

It is one of my favorite things in life–and I’m not just being hyperbolic! Regular tinting and toning alone can be so beautiful, and really enhance the “time gone by” quality of silent filmmaking. Hand-painting magnifies this quality even more. Nothing had that same glow of color–except physical stained glass windows. I’m a huge fan of those hand-painted yellows, by the way. Huge. 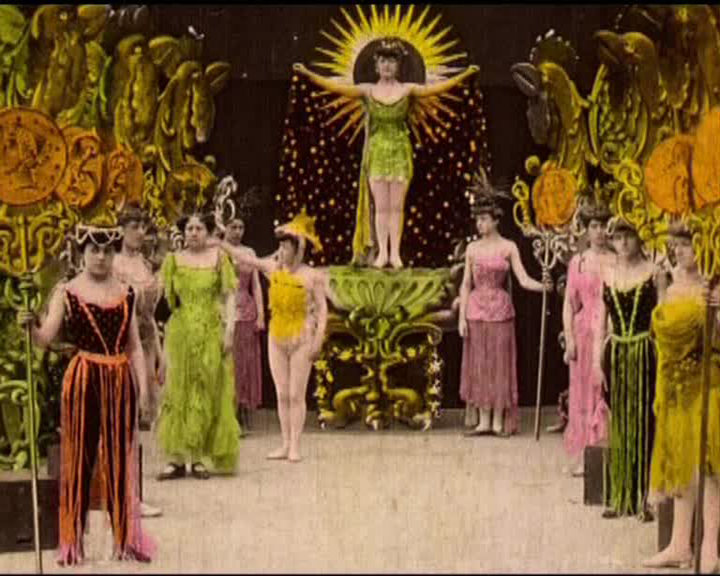 That golden yellow, though.

What is your opinion on the work of Charles-Émile Reynaud?

I almost wonder if he should be considered one of the great filmmaking pioneers–well, at least a pioneer of animation. Magic lanterns aren’t quite the same as film strips, but they did play a huge part in the progress of moving images–part of the optical illusion puzzle, if you will. (By the way, I think I saw one of his delicate praxinoscopes at the Cinémathèque Française–quite possibly!)

I’ve been checking out the work of Douglas Fairbanks recently, or what I can find of it. Is there one film of his, in your opinion, that I should definitely see, and why?

The Thief of Bagdad leaps to mind! The Mark of Zorro is probably Fairbanks’s most significant film, since it marked his leap to swashbuckling adventure stories and is just a plain great movie, but Thief of Bagdad is one of his most ambitious works. Its spacious set designs and clever special effects make it a real treat for the eyes. It’s one of the best examples of film as escapism, if you ask me.

What books should I read to learn more about silent film?

You can’t go wrong by starting with The Parade’s Gone By, Kevin Brownlow’s incomparable collection of interviews with silent era veterans–everyone from actresses to editors. American Silent Film by William K. Everson is another favorite of mine. And two of my most prized and helpful books are The Transformation of Cinema: 1907-1915 by Eileen Bowser and An Evening’s Entertainment: 1915 to 1928 by Richard Koszarski. The level of detail in both books is just astounding, they’re beyond helpful. Biographies and memoirs can often fill in a lot of details, too–The First King of Hollywood: The Life of Douglas Fairbanks by Tracey Goessel, Adventures with D.W. Griffith by Karl Brown and Chaplin: His Life and Art by David Robinson are just a few that I find fascinating.

Not having seen the exact interview you mentioned, if I can venture an educated guess, Shepard’s restorations were so difficult because he was returning the First Nationals to their original, theatrical release versions (rather than just cleaning up the most readily available prints). Chaplin’s films were wildly popular, of course, and thus various chopped up, damaged and incomplete prints of his work were sprinkled throughout archives all over the world. Gathering up all those puzzle pieces and finding the ones in the best condition certainly would take herculean effort! Nitrateville.com is a good resource for info like this, some of the historians that frequent there knew and worked with Shepard (bless his memory).

Speaking of interviews, you might like this wonderful one from digitallyOBSESSED where Shepard discussed many of his restorations: http://www.digitallyobsessed.com/displayinterview.php?ID=9 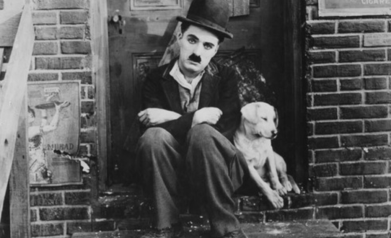 Do you know if there were any silent adaptations of Jane Austen’s stories? I have never run across any mention of such things…

Bizarrely enough, there doesn’t seem to have been any. All I could find is a brief mention of a 1917 version of Pride and Prejudice “nearing completion” by a British studio called Ideal Film Renting Company. Hmm. (Link: https://archive.org/stream/moving34chal#page/1770/mode/2up/search/Pride+and+Prejudice) Her novels are pretty hard to translate to silent film, being very dependent on dialogue and all, so that may have been a factor. Perhaps she wasn’t as “fashionable” at the time, too, or maybe there weren’t a ton of Austen plays in that era–many, many plays were quickly translated to the screen!

Was there some connection back in the day between Christmas and fairy tale plays and/or films?

You’ve got a great intuition–there definitely was a connection! In the early 20th century, it was traditional to have fairytale plays and pantomimes around Christmastime, largely because of their appeal to children. J.M. Barrie even wrote Peter Pan with Christmastime in mind. Tales like Snow White and Cinderella were popular on the stage during the holiday season, and it wasn’t long before they started being made into films, too. Which reminds me–I should write an article on this very topic next December!

It seems to me that the black and white portraits of the silent stars are not what are done now. These people just glow and are beautiful. Was it a different makeup or the cameras or…?

A bit of both–plus lighting! Silver gelatin prints were probably the most common types of photos, having rich black and white tones with subtle shading. Pale makeup and powder did help make stars “glow,” but many photographers also had a painterly (or “pictorial”) view of how to use strategic lights, reflectors and shadows to make their subjects look as beautiful/dignified as possible. The idea was to capture something about the subject’s “soul,” rather than just their features, and seemed to be based on the long tradition of formal painted portraits. Gauzes on the camera lens and soft focus were sometimes used to give a softer, more dreamy look, too. 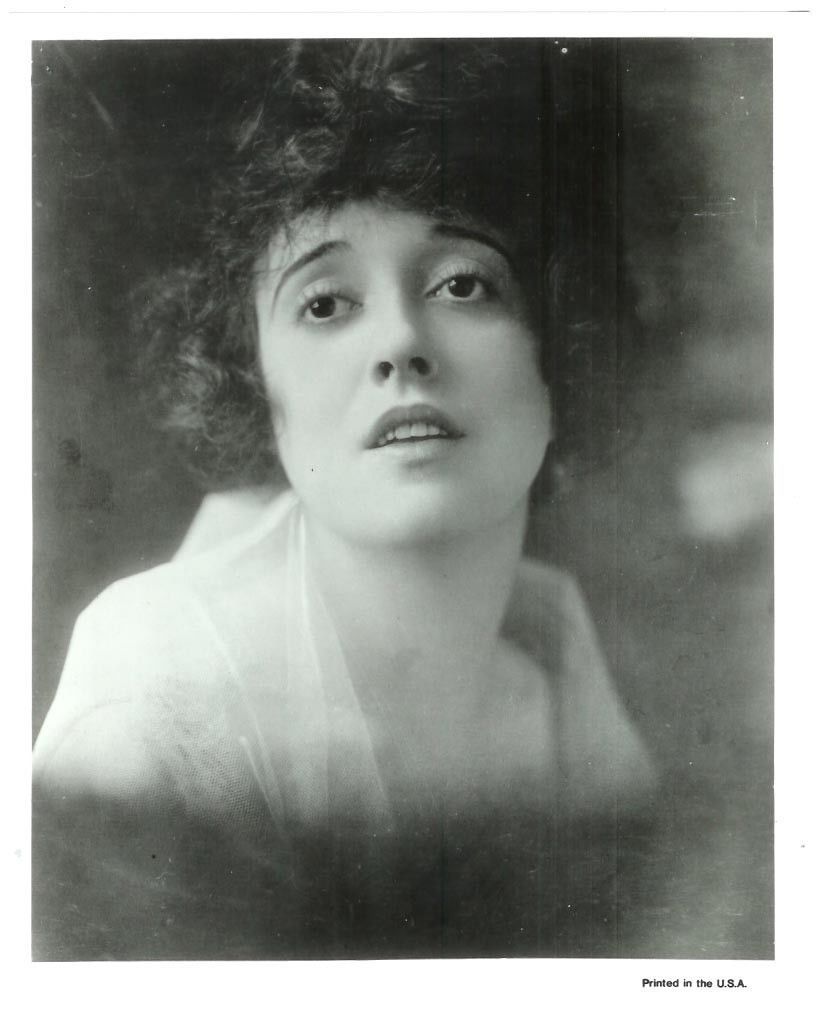 The “dandy horse” bicycle prop that Buster Keaton used in “Our Hospitality” was donated to the Smithsonian, what became of the train that Buster had built for the same film and was also used in Al St. John’s “Iron Mule?

UPDATE 1/15/20 (as new info rolled in): The appearance in The Iron Mule was apparently the last time Buster’s replica “Rocket” was used in a film. Its whereabouts after its “Hollywood career” are unknown, unfortunately. There are at least two other “Rocket” replicas that exist in the U.S. but they were both built in 1929. Here’s a fun fact, though–the costumes from Our Hospitality were used by comedian Lupino Lane in his short Time Flies (1926). (Thanks to historian David Pearson for helping me track down some of this information!)

How do I go about producing a silent film screening? The place I live now has only one film event in the calendar year and it’s geared to contemporary cinema.

While I don’t have firsthand experience with this (maybe one day!), but I’ve heard that the first step is to find out the licensing rights to the film you’re interested in showing. The cost of film rentals + license can be steep (three digit range) but that’s where a sponsor or two can come in! Once again I’d recommend asking around on Nitrateville.com, which is full of historians, silent film accompanists, and folks who work with film festivals around the world. They’re fantastic at steering people in the right direction.

Do you know if Jobyna Ralston’s ealy talkie College Coquette is extant–and accessible?

It is extant, although it doesn’t seem to be available on DVDs anywhere, and is screened pretty rarely. As a college comedy, it supposedly pales in comparison to something like The Freshman or The Plastic Age–but I’d rather make that judgment for myself! 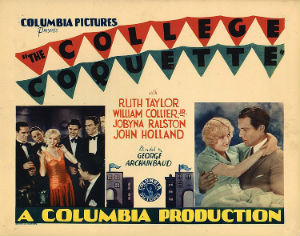 Who is your favorite Keystone actor (not counting Louise Fazenda, since she is a specialty of yours)?

That would be the great Roscoe Arbuckle, of course! A lot of the Keystone players can count me as a fan–Harry McCoy, Minta Durfee, Al St. John, Joe Bordeaux and Ford Sterling to name a few–let’s face it, they all rock–but no one makes me laugh as hard as Roscoe.

And that concludes Silent-ology’s first AMA–thanks for participating, folks! It’s fun to shake things up now and then, isn’t it? 13 thoughts on “Ask Me Anything!–Answers To Your Qs”