Battleship Potemkin is one of the “big” ones–a film so iconic, its every minute so thoroughly pieced apart and studied, that many film buffs have a hard time viewing it objectively. It’s such a “big” one, in fact, that few non-film buffs have actually seen it. Like Citizen Kane, it’s considered a legend, but movie lovers are content to take the critics’ words for it. 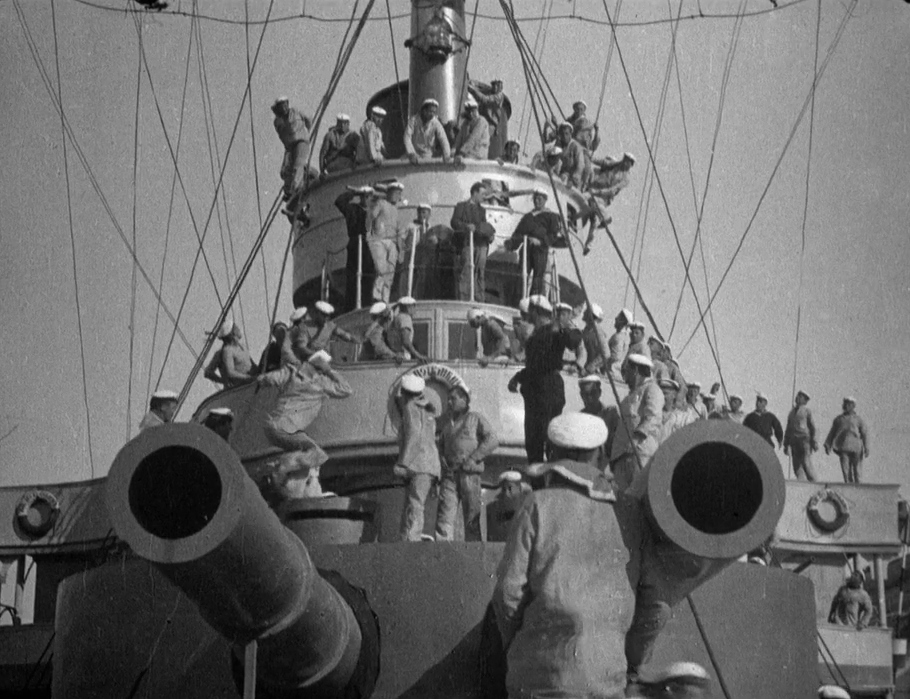 After the Russian Revolution of 1917, the new Soviet government was determined to spread socialism by any and all means possible, and one of the most agreeable means was film. In the mid-1920s, with the twentieth anniversary of Russia’s 1905 revolution looming, the Soviets decided to celebrate by commissioning a suitably epic film. After watching Sergei Eisenstein’s film Strike (1924), it was decided that this talented new director would helm the project.

Eisenstein was only 27 at the time. He had served in the Red Army during the October Revolution of 1917, and like other twenty-something filmmakers in the Soviet Union he was a fan of the new “collectivist” government. Fascinated by the power of editing, he developed several intellectual theories about the use of montages to create strong emotional responses. Editing to Eisenstein was an engineering process, each cut resembling “the series of explosions of an internal combustion engine, driving forward its automobile or tractor.” Strike, his first feature-length film, was remarkably inspired, bubbling over with creative camera placements and brisk editing. And if Strike was Eisenstein’s initial explosion of youthful creativity, Battleship Potemkin would present an artist already in his maturity, confidently picking and choosing just the right techniques for his art.

Originally, the Soviets wanted Eisenstein to make series of eight episodes focusing on different pro-Bolshevik events, but he eventually scrapped most of the script and focused on the account of a sailors’ uprising on the battleship Potemkin. Shooting took place in Odessa in present-day Ukraine, where the original uprising (tried to) take place. Eisenstein managed to find the real Potemkin’s sister ship Twelve Apostles and transformed it into a replica of the legendary battleship. Instead of hiring actors he had crewmembers and locals play the roles, being more interested in earthy “types” than polished performances. Assistant directors played the ship officers, a furnace man played the ship’s doctor and a gardener from Sevastopol had the role of the priest. 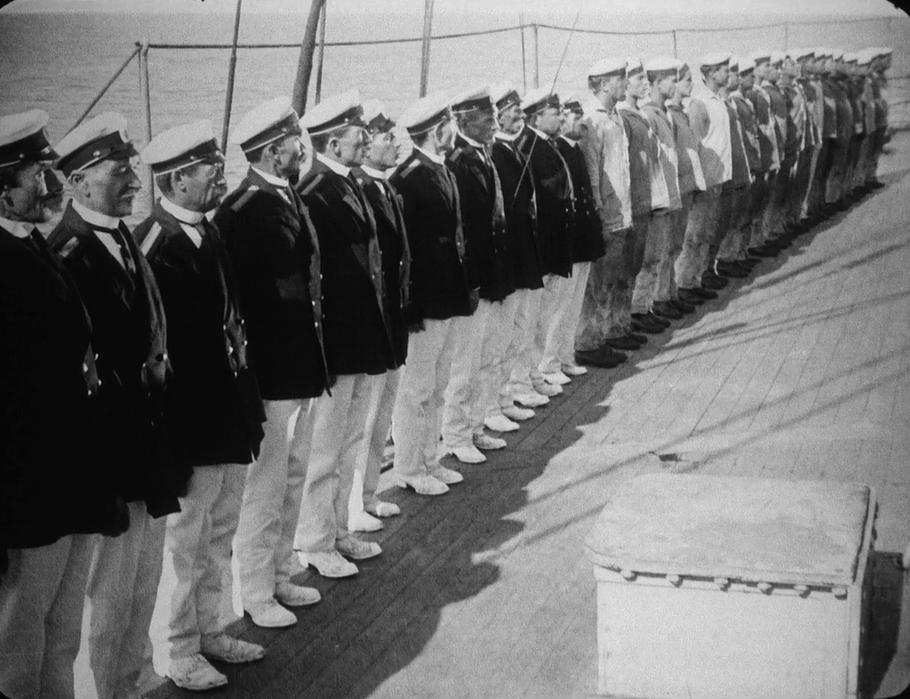 It was in Odessa itself where Eisenstein was inspired to create one of the most influential sequences in cinema history. He recalled:

No scene of shooting on the Odessa steps appeared in any of the preliminary versions or in any of the montage lists that were prepared. It was born in the instant of immediate contact.

The anecdote about the idea for this scene being born as I watched the bouncing from step to step of the cherry pits I spat out while standing at the top, beneath the Duc de Richelieu’s monument, is, of course, a myth–very colorful, but a downright myth. It was the very movement of the steps that gave birth to the idea of the scene…And it would seem that the panicky rush of the crowd, “flying” down the steps, is no more than a materialization of those first feelings on seeing this staircase. 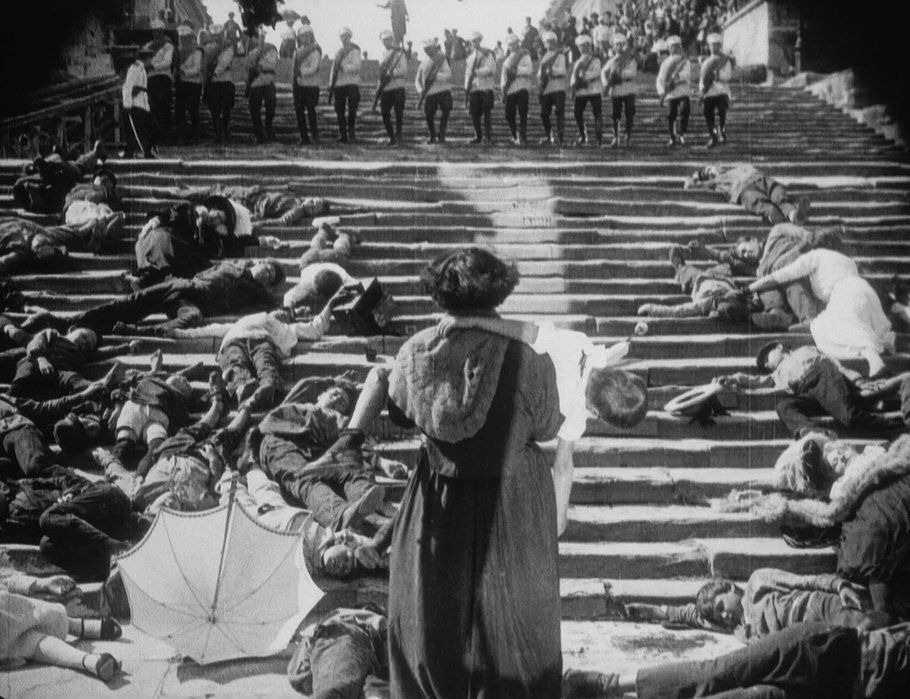 The plot of the “Odessa episode” is straightforward. Sailors returning from the Russo-Japanese war grow increasingly disgruntled when they’re ordered to eat maggot-ridden meat. When some of the sailors rebel, the officers order the rebels to be covered in a tarpaulin and shot, which incites a full-blown mutiny. The sailor leading the mutiny is killed, and his death is mourned by the shocked Odessa civilians. When the civilians peacefully demonstrate against the unjust event, a Cossack squadron fires on them. The terrified crowd is forced to flee for their lives down the seemingly endless Odessa steps. 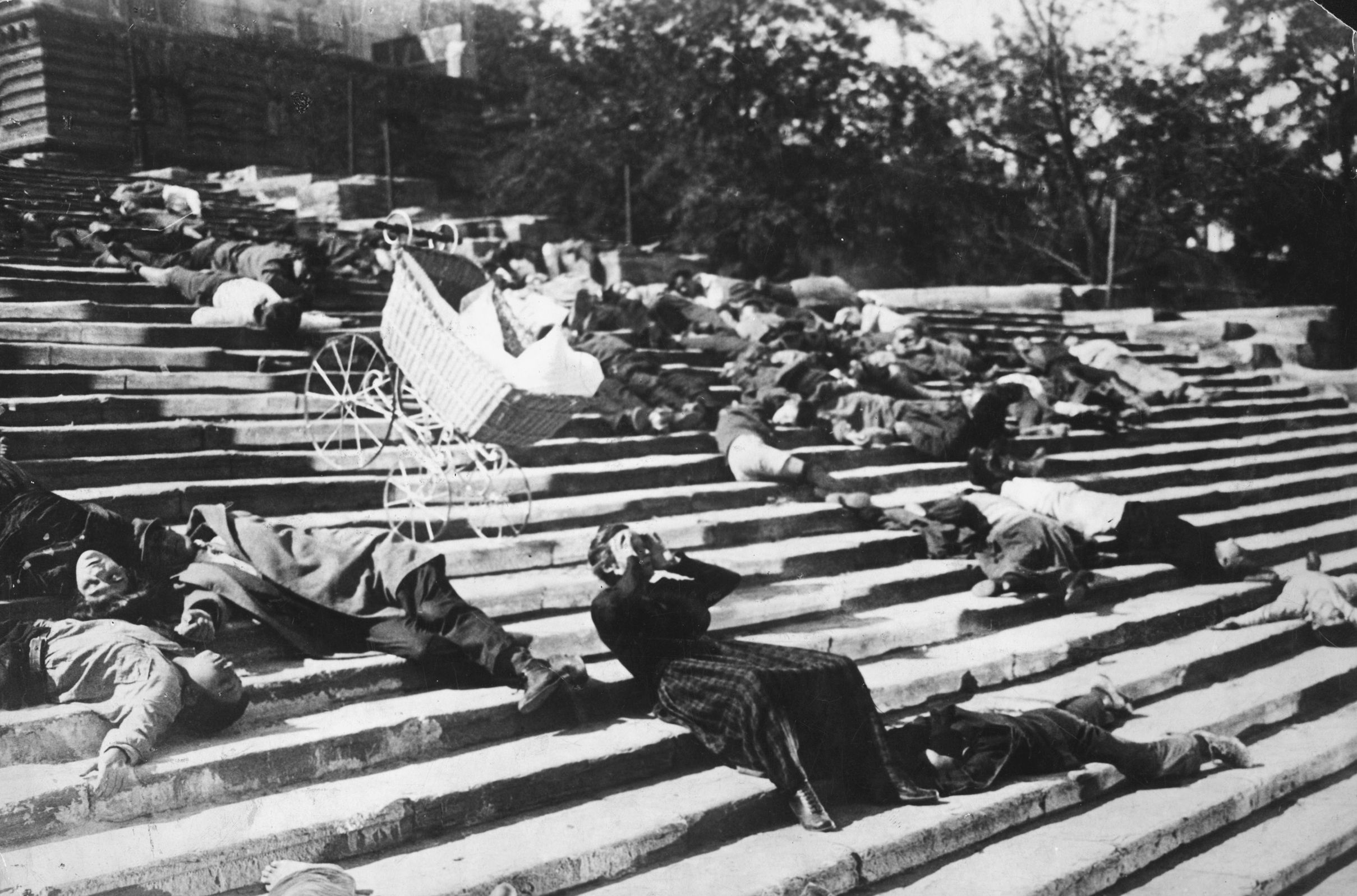 As far as propaganda goes, Battleship Potemkin toes the party line with unequivocal precision. The offenses against the sailors are obviously unjust–the shots of maggot-infested meat appear like injustice itself taking nauseating shape. The puny ship’s doctor is smugly unlikable and the officers are bad-tempered brutes. By contrast, the good-hearted citizens of Odessa come together as one (the Soviet dream) in a flood of righteous indignation. Their massacre on the steps is swift, bloody, and heartbreakingly evil. There’s no ambiguity (or individualism) in this operatic story. 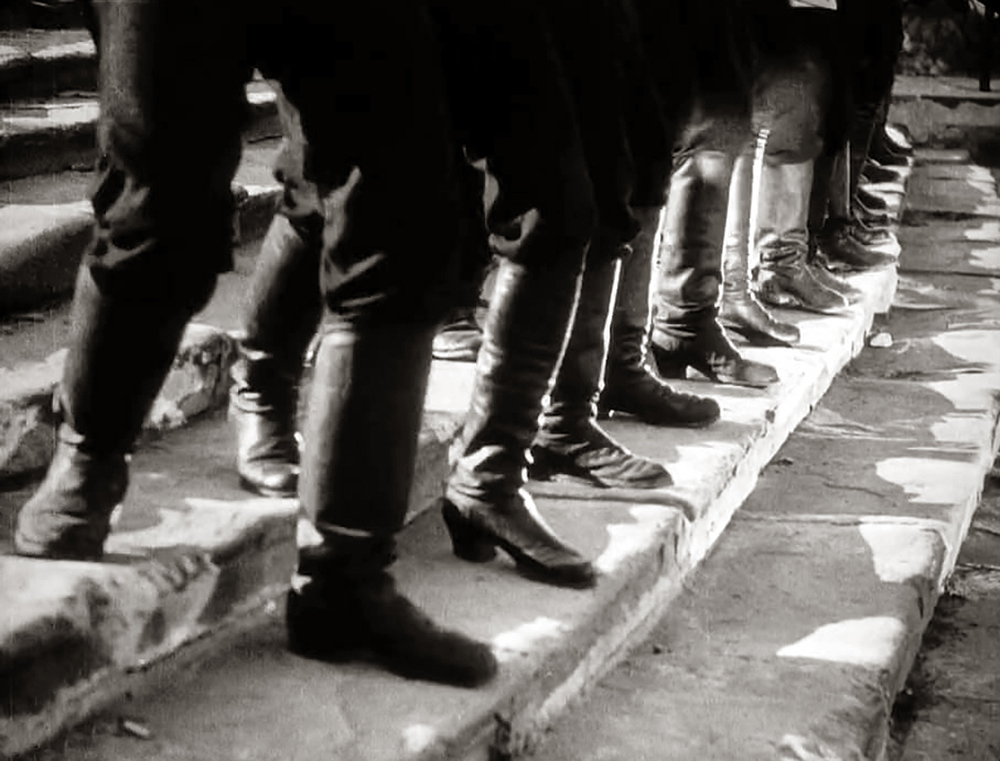 The real power of Potemkin lies in that fundamental film process: editing. Editing is usually considered the least interesting part of the filmmaking process. But a beautiful building can’t come together without boards and nails, and a great film can’t exist without skillful editing. To Eisenstein, it had a heady power:

…We have taken the first embryonic step towards a totally new
form of film expression. Towards a purely intellectual film, freed from traditional limitations, achieving direct forms for ideas, systems, and concepts, without any need for transitions and paraphrases. We may yet have a synthesis of art and science.

The Odessa steps sequence present Eisenstein’s montage theories at the height of his dramatic artistry. The setup emphasizes the civilians’ vulnerability–the women wear nice dresses and stand on the steps in dainty shoes, wide-eyed children hold their mothers’ hands, and there are shots of elderly men with canes and youth with disabilities. When the massacre begins, it comes quite literally out of nowhere. As the people begin to run, a woman runs straight at the camera and for a second her parasol fills the screen–obstructing our vision and making us participate, for an instant, in the feeling of panicked confusion.

The silent era was not a bloody one, in the literal sense of onscreen violence. Blood makeup was rather rare, or applied sparingly. Eisenstein not only shows the blood–even on a child–but makes us believe we see the blows that cause it. Only later do we look back and realize we don’t always see bullets enter chests or sabers slash their victims–but the fast-paced sequence of expertly juxtaposed images make us believe we’re seeing a parade of explicit scenes.

Thousands of words can be spilled on this sequence, of course–on the camera pans, on the disorienting jumble of different angles, on the fact that we see closeups of the frightened civilians but none of the Cossacks until the savage final moments–it’s not for nothing that it’s been praised and studied for nearly 100 years. In the aftermath of the massacre, the battleship fires at the Odessa theater. Shots of three stone lions in different poses–one “asleep,” one with open eyes and one sitting upright–symbolize the people’s uprising, or perhaps tyrants awakening to the power of the people. The propaganda is clear: “These shocks provide the only opportunity of perceiving the ideological aspect of what is being shown, the final ideological conclusion.”

Battleship Potemkin was subject to various bannings over the years, some authorities fearing it could incite rebellion. We’re used to its style of shocks today, and less familiar with its use of “types” instead of vivid characters. It’s probably best viewed after some hearty helpings of 1910s and 1920s cinema, where its tragic spectacle truly stands out.

In any case, Battleship Potemkin‘s influence is so significant that we can’t quite grasp it. Its techniques permeate cinema as thoroughly as the air we breathe. It was only Eisenstein’s second feature film. 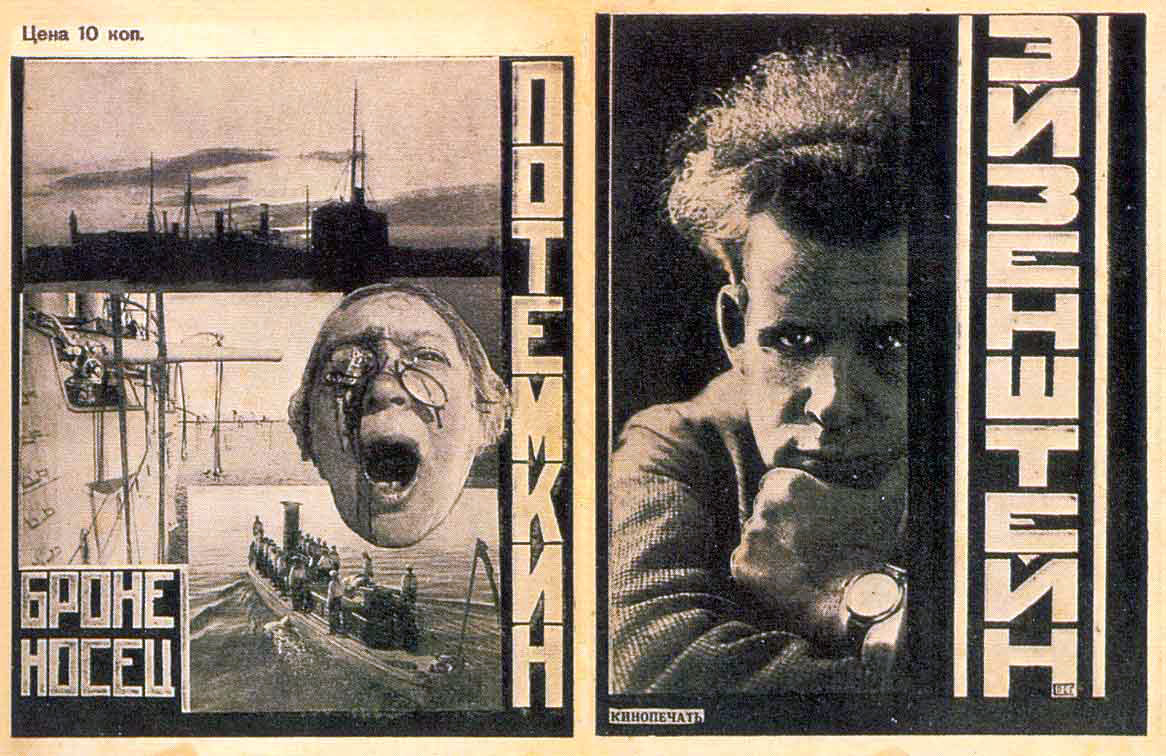