Much like the way his revolutionary films surprised audiences, reading about Eisenstein’s life can be an eye-opener. It’s easy to come away from the “The Father of Montage’s” dense prose and feel that he was more of a shadowy Historical Figure than a human being. But his serious, studious side was only one part of the complex montage that made up Sergei Eisenstein. His friend Brooks Atkinson described the Sergei he knew in the mid-1940s:

…He was the gayest Russian I knew in Moscow in 1945-46 when I was serving as a correspondent there. He was a Puck-ish looking man of middle years with dancing blue eyes…he radiated joy and amusement. He had great gusto for everything except politics–for art in general, and the motion picture and theater in particular, for ideas in any form and for detective stories. 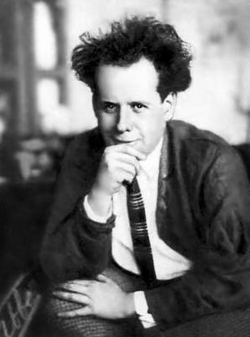 Eisenstein was born in Riga, Latvia back when it was still part of the Russian empire. His father Mikhail was an architect specializing in Art Nouveau buildings and his mother Julia was the daughter of a well-off merchant. His earliest memory was gazing at a bough of white lilac coming through his bedroom window: “My first childhood impression was…a closeup.” 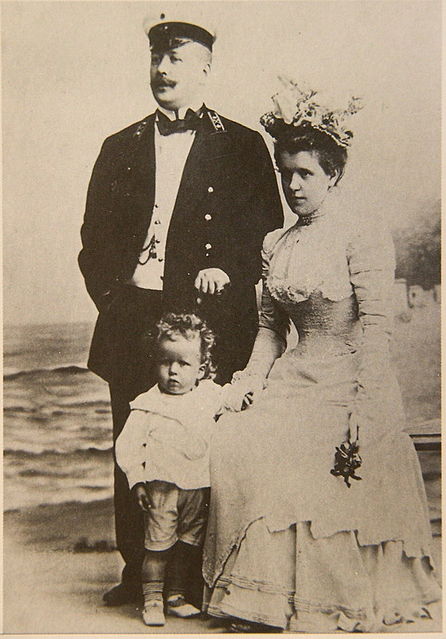 Little Sergei, looking EXACTLY the same as he would years later.

While his early life was comfortable financially, he would be at odds with his parents. Mikhail was a pompous, bullying man who some suspect would be a model for the “bourgeois” characters in Sergei’s films; strong-willed Julia (who Sergei resembled the most) insisted on a love of culture but also pampered him. Eventually, the ill-matched couple separated, finally divorcing in 1910. Julia abruptly left Sergei with Mikhail and went to live in France. He would recall riding his little bike through the empty dining room, since she took most of the furniture.

Young Sergei became an avowed bookworm, fond of everything from literature to lurid dime novels to history–especially the history of the French Revolution. He was only seven during the Russian revolution of 1905 but grew up steeped in its lore, and to him it resembled the monumental events of 18th century France. It all fascinated him: “First of all it was because of their romance. Their color. Their rarity. I greedily devoured book after book. The guillotine enthralled my imagination…” 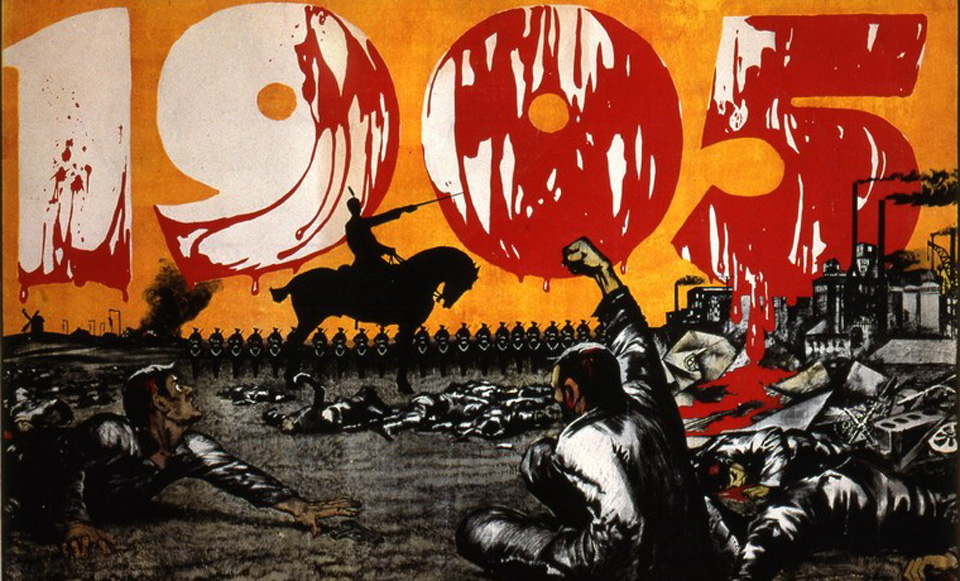 As a young man Eisenstein spoke several languages and adored theater and the opera. He also enjoyed drawing, doodling caricatures of performers he saw and making little comic strips. Despite this attraction to the arts, he decided to study engineering and architecture at the Petrograd Institute of Civil Engineering–dutifully following in his father’s footsteps.

The 1917 Russian Revolution soon put an end to this. While he was not particularly political, Eisenstein was enthusiastic about rebelling against the “bourgeois,” admittedly personified by his own tyrannical father. In 1918 Eisenstein signed up for the Red Army (not-so-ironically, his father would sign up for the White Army). Eisenstein’s experiences during his service would set his destiny in motion:

The revolution gave me the most precious thing in life – it made an artist out of me. If it had not been for the revolution I would never have broken the tradition, handed down from father to son, of becoming an engineer… The revolution introduced me to art, and art, in its own turn, brought me to the revolution…

Once the Bolsheviks were in power, Eisenstein moved to Moscow and started working at the Proletkult (Proletarian Cultural Movement) theater. He was drawn to realism and the way it took drama to the next level. In 1923 he insisted on producing his play Gas Masks (set in a gas factory) in an actual gas factory. Where else could he go from there but to motion pictures, where he could use any real-life setting he desired?

Lev Kuleshov, a teacher at the world’s first film school VGIK, would be a big influence. Thanks to an early 1920s depression there wasn’t much film stock in Russia, so Soviet filmmakers made do with examining the films they had and figuring out how they pieced together. Kuleshov became famous for his insights on editing, especially his “Kuleshov effect”:

A new editing style sprung up–“montage,” distinct from the normal editing practice of simply moving the action along and keeping track of the characters. Eisenstein was attracted to it like a fly to honey. He also took it one step further–if emotions could shift depending on how a film was edited, ideas themselves could take visual form. He could, in other words, use unrelated images to create “an idea that arises from the collision of independent shots.” Eisenstein’s revelation was that film could be handled much like Chinese writing: two symbols might have two different meanings, but joining them together creates a new word entirely. Scenes of civilians being killed by soldiers could be paired with shots of cattle being slaughtered to suggest injustice; images of three stone lions appearing to “rise” could symbolize the people’s revolution. This “montage of attractions” would also be ideal for propaganda. An image of a heavyset man doesn’t have much meaning by itself, but pair it with a shot of a lolling pig and you’ve got yourself a “capitalist”–make it a heavyset farmer, and you’d even have a kulak.

Eisenstein would write extensively on his complex theories of montage, publishing intellectual works like The Film Form and The Film Sense. He had begun trying out his ideas in his “revolt against the theater,” Strike (1924), his first feature-length film (his first film ever was a short experiment made for one of his stage productions). Dynamic and intensely creative, as if Eisenstein was trying to get as many ideas on nitrate as possible before exploding, Strike revolved around a workers’ strike that ended in tragedy. The violent ending can shock us even today.

It certainly shocked and impressed the Soviet government, for soon a commission came his way. The result would be Battleship Potemkin (1925), one of the most influential films of all time. Hardly a film is made today that isn’t indebted, even in a small way, to Eisenstein’s editing techniques.

Work on pro-collectivist farm propaganda Old and New (1929) (also known as The General Line) was interrupted for another commission: October: Ten Days That Shook the World (1927), glorifying the 1917 Revolution. Perhaps Eisenstein’s most operatic film, he had thousands of extras at his disposal and gloried in shots of dense crowds interspersed with grand statues. In one famous montage, images of Christ are followed by Buddhist and Hindu gods, then African idols, and finally military regalia, suggested that “backwards” religious devotion be transferred to reverence for the state.

Old and New is a prime example of cinematic art used to uphold the party line (in one heavy-handed sequence, fervent participants in a religious procession are compared to sheep). It also revolved around a distinct character–the peasant Marfa–not the norm in collectivist works. At this point, despite his fame Eisenstein was being regarded with suspicion by the Soviet government, which was starting to favor socialist realism. Feeling the sting of criticism for being too “experimental,” when an offer came from Paramount Studios he accepted, likely with some relief. 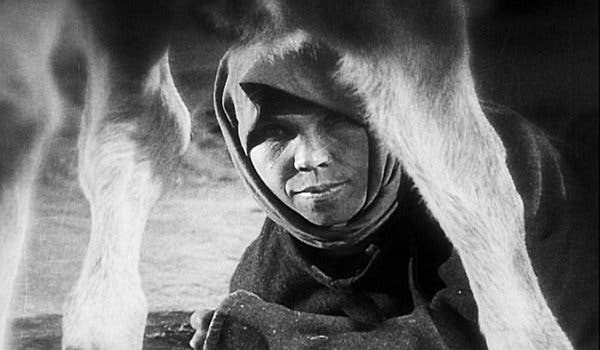 In Hollywood he would hobnob with Charlie Chaplin and Upton Sinclair and attempt several film projects, none of which excited Paramount. In the end, the decision was made to sever his contract. A friend recalled that despite the failure, Eisenstein “had no bitterness in his soul about anything and he remembered America with the gratitude of a schoolboy recalling a holiday when he was out from under institutional controls.” This sense of adventure likely contrasted with the atmosphere back home, where Stalinism was in full swing. 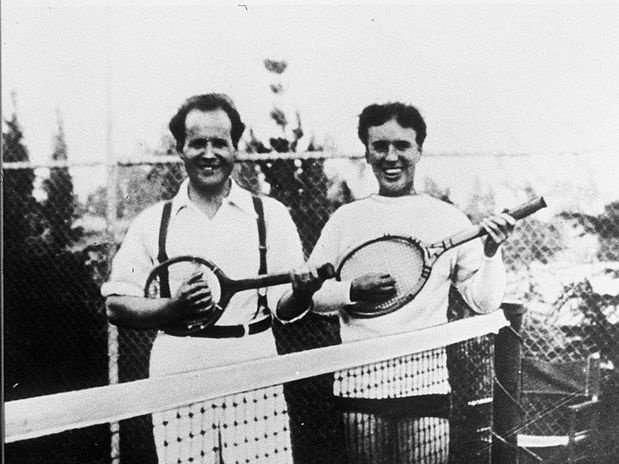 Happier times hanging out with Charlie.

During the early talkie era, Eisenstein decided to head to Mexico, a country whose art and culture had always fascinated him. He shot a great deal of footage with the idea of making a film called ¡Que viva México!, but kept bumping heads with Mexican authorities. On top of that, he was in Mexico for so long that Stalin was beginning to suspect that the USSR’s most famous director had deserted.

Returning to the Soviet Union, Eisenstein married fellow filmmaker Pera Atasheva (there have always been rumors of his homosexuality, but he didn’t publicly confirm them) and resumed filmmaking under the government’s watchful eye. His later work, less experimental but still ambitious, included the epic Alexander Nevsky (1938), climaxing in a great battle on a frozen lake (allegedly Stalin was very pleased with the film and declared, “Sergei Mikhailovich, you are a good Bolshevik after all!”). It also included the planned three-part Ivan the Terrible series in the early 1940s. Ivan the Terrible: Part I nabbed Eisenstein the Stalin Prize. Part II, however, would be harshly criticized and banned from release, the authorities suspecting it too closely paralleled Stalin’s reign of terror (a surprising risk for the seemingly loyal Eisenstein). Part III would never be completed. 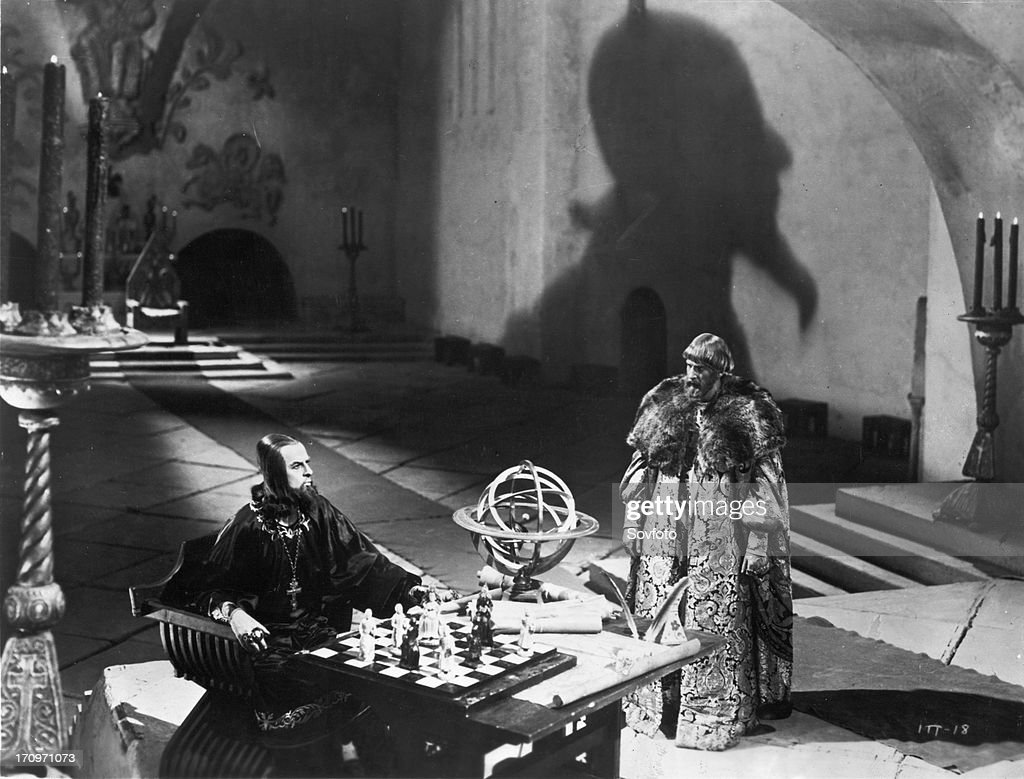 In 1946, Eisenstein  suffered a heart attack which doctors initially feared would kill him. He spend months recovering, and Brook Atkinson recalled paying him a visit:

When my wife and I visited him, he greeted us exuberantly and plunged into the sort of nonsense he loved to prattle.

“I’m dead right now,” he said when we came in. “I really died about five weeks ago. Now that I am dead I can do anything I like and I am going to…This is the best thing that ever happened to me.”

This sort of impish optimism kept Eisenstein going the next couple years, until a second heart attack finally claimed his life in 1948. The Soviet government, which had praised and criticized the director in turns for so long, gave him a grand funeral. Flowers filled the House of Cinema Workers where his body laid in state, and his ashes–in an urn decorated with the star of the Soviet Union–were buried in the Novodevichy Cemetery in Moscow.

Eisenstein’s place in cinema history is unshakable, although complicated. His techniques have managed to float free of their time period, but his filmography will always be shadowed by its support of communism and the Soviet regime. Yet in his writings he is never more enthusiastic than while talking about art, and all its bright possibilities. Not long before his death his wrote:

A place must be prepared in consciousness for the arrival of new themes which, multiplied by the possibilities of new techniques, will demand new aesthetics for the expression of these new themes in the marvelous creations of the future.

To open the way for them is a great and sacred task, and all those who dare to designate themselves artists are called upon to contribute to its accomplishment. Kenez, Peter. Cinema and Soviet Society: From the Revolution to the Death of Stalin. London and New York: I.B. Tauris, 2001.

6 thoughts on “The Monumental Cinema Of Sergei Eisenstein”