It opens with vistas of ripening wheat fields, rippling in the wind of the Ukrainian steppe. Fertile seeds from fertile soil–there’s a long history behind the familiar sight. It cuts to a medium shot of a young woman standing beside a sunflower, with the sky providing a natural background. Both are also connected to the fertile soil. Seeds, fields, sun, harvest, life–those few shots elevate their humble subjects into symbols of the most natural, the most beautiful order of things.

Its maker, Aleksandr Dovchenko, was a magnetic personality. Historian Jay Leyda recalled meeting him for the first time in the 1930s: “His voice, as powerful and convincing as I imagined Mayakovsky’s must have been, filled his hotel room to the bursting point. His dynamic person exactly fitted my imagined maker of Arsenal and Earth…His relation to actors was to infect them with his immense enthusiasm in the same way that he swept me off my feet with his reading. It was an exhilarating experience…”

Dovchenko was a native Ukrainian, born in 1894 to a peasant family. Of his family’s fourteen children, he and his sister were the only ones to make it to adulthood. “I still cannot bear to look at funerals and yet they pass through all my scripts and all my pictures,” he would write, “…for the question of life and death affected my imagination when I was still a child and left its imprint on all my work.”

Initially working as a teacher, he became a diplomat following the 1917 Revolution. This was followed by an interest in art and finally film. His first major feature, Zvenigora (1928), astonished critics at the time. A time-shifting tale of a Ukrainian Grandfather seeking to protect an ancient treasure, it revolved around themes with special meaning for Dovchenko: the clash of past and present, the culture and folklore of Ukraine, and his connection to his grandfather, who left a strong impression on him: “Have dreams merged into memories, and memories of memories–I’m no longer sure. I only remember that grandfather was very old and I remember that he used to look like one of the images on the icons that graced and guarded our old house.”

Zvenigora was followed by the sophisticated Arsenal (1929), and then the more personal Earth, forming a loose kind of trilogy. Earth would be hailed as his masterpiece, Dovchenko’s meditation on the ideas that haunted him.

It begins with a peaceful death: a wise grandfather, Semyon, passes away in an orchard with friends and family around him. A friend jokes, “Let me know where you are over there, Heaven or Hades”–a Christian Heaven or Hades’s pagan underworld. It’s a wry nod to the societal confusion in the Soviet Union, where the “old ways” were quickly–too quickly–being replaced with the new. 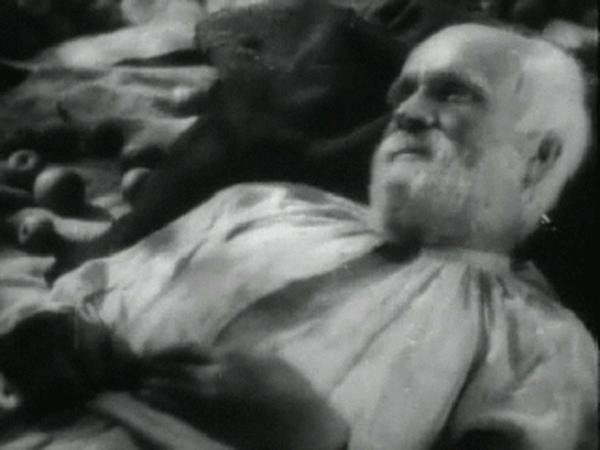 Semyon’s grandson Vasili (played by the handsome Semyon Vashenko) is pro-collectivization and wants to bring a tractor to his rural community. This puts him at odds with the local kulaks (in their traditional embroidered clothes)–why trust modern technology? But the optimistic Vasili has his way, bringing the new tractor in a joyful procession. As the peasants watch, the camera captures them in low shots so they appear to be gazing into the distance–much like those Soviet propaganda posters.

Death, however, enters the story again. Vasili, walking home at dusk after a long but fruitful day of work with the tractor, expresses his joy by dancing a solitary hopak. Without warning, he’s shot by a resentful young kulak. His death is viewed as a martyrdom and the local peasants give him a “new” kind of funeral, singing together as his procession winds through the village. There’s an odd touch when a speaker at the funeral declares: “Vasili’s fame will fly around the entire world…like our Communist airplane up there!” Everyone looks upwards, but there’s no followup shot of the airplane.

The showpiece of Earth is the lengthy final montage of Vasili’s funeral combining images of resolute marching peasants, apple boughs touching Vasili’s face as his bier is being carried by, his fiancee going through a mad frenzy of mourning, a mother laboring to give birth, and the murderous kulak going mad with guilt. Few cross-cutting sequences would ever match this operatic whirl of emotions as life, death, birth, madness and hope parade dizzyingly before our eyes.

Part of Earth’s power is the sweeping minimalism of its cinematography, where vast plains and even vaster skies have an almost dream-like effect. These are combined with Dovchenko’s skilled use of closeups which writer Raymond J. Uzwyshyn compared to Byzantine icons. The frequent switches from long shots to closeups give the subjects a certain stature, rather like formal portraits. Other writers have also pointed to the touch of humor in the “socialist realist-style” shots of farmers and barn animals, shot from below so they’re grandly looming against the sky.

There is, perhaps, a touch of humor in some of the editing too. The style can be deliberately disorienting. In the early scene of Semyon’s death, Dovchenko cuts to several women crying and wailing–but not over Semyon. They are kulaks, upset over some different news. Dovchenko plays with our expectations as if wanting to keep us on our toes.

Many Soviet critics were not happy with Earth. Socialist realism was becoming the accepted style, and Dovchenko’s contemplative portrait of rural life seemed too ambiguous and artsy to serve as good propaganda (especially since it involved Ukrainians). Critic Demyan Bednyi even called it a “kulak film,” and wrote: “Counter-revolutionary obscenity! That’s how low we have sunk.” Dovchenko was shocked by the criticism and likely frightened by the implications it had for his career in the Soviet Union, spending some months abroad until it boiled down.

Today much of the writing on Earth agrees that it transcends its propaganda, and is more important as a lyrical work of art than as encouragment for collective farming. I can agree to a point. I would argue that while Earth can be analyzed simply for its artistry, Dovzhenko’s decisions do indeed uphold the propaganda, painting collectivism as part of the “natural order” of things, and a “natural” evolution of traditional rural life. It’s subtle, but it infuses the film. Being set in Ukraine, the Holodomor can’t help but cast a pall.

Admittedly, though, what lingers isn’t its subtle–but insistent–messaging, but its poetic effect, especially the gauzy images of apple boughs. As Earth ends, rains come and soak the orchards, dripping through the delicately-lit leaves and gleaming apples. The land is fertile, and the circle of life endures.