It’s an unfortunate fact that many stars are known mainly for a scandal or unfortunate demise. A lifetime of triumph and failure, hard work and reward, love and struggle–all are scoured away the second topics like “mysterious death” or “addiction” enter the picture. The individual involved dwindles down to a name, a “character” from long-ago times.

A prime example is Wallace Reid, major leading man of the 1910s and early 1920s. As a performer, he’s known mainly to silent film buffs. As a name, he has the sad distinction of being the first major Hollywood star to die of a drug addiction. “Drug addiction”–what a sledgehammer of a phrase. Decades of scandals have unfortunately accustomed us to scandals in Hollywood, but back in the early ’20s Reid’s death truly shocked the world.

But before we cover the tragic aspect of his life–and it was truly a tragedy–let’s get to know “Wally,” the well-liked Renaissance man whose good looks are at home in any decade.

He was born in St. Louis in 1892 and came from a show business family. His mother claimed that Wallace weighed over 11 pounds at birth. Baby Wally had such light, fuzzy hair that his family nicknamed him “Cottontop”–as an adult he would still sign “Wallace Cottontop” on photos for his mother. The Reid family traveled frequently while appearing on the stage, and by the time Wally was a boy he started appearing on stage, too. He was educated in New Jersey and Pennsylvania and excelled at athletics, writing, and music–he could play the piano, violin, banjo, saxophone, and drums.

Wally’s father was quick to get into “the movies,” selling scenarios to Selig around 1910. Wally had already tried working as a ranch hand in Wyoming and a reporter, but felt those careers weren’t the right fit. Once he visited a studio, however, he quickly felt at home with the movie making process. He tried to find work at Vitagraph as a director and cameraman, but the studio took one look at the 6’2” athlete with deep blue eyes and decided he would make a fine motion picture actor. 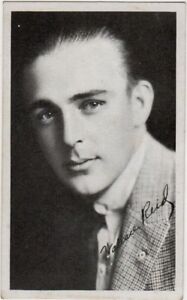 He would still work behind the scenes as an assistant director and scenario writer, but studios increasingly insisted on putting him in front of the camera. His frequent costar at Vitagraph was the popular Florence Turner. After some work for Reliance he hopped over to Universal, where he was put in westerns. There he met actress Dorothy Davenport, the proud descendant of distinguished theater veterans. At first she didn’t think much of Wally’s acting, but to her surprise, he did prove to be as good a horseman as the real cowboys on Universal’s set. They started spending time together and married in 1913.

The young couple in a film together. (Image credit: Silence is Platinum)

Wally’s first step to becoming “somebody” was a small role in The Birth of a Nation (1915), where he played a blacksmith who single-handedly fights back a group of miscreants. In the days where directors often got more publicity than actors, audiences wanted to know who the physically powerful young man was. And thus Wally was on his way to becoming a matinee idol–a bit to his chagrin, since he still hoped to work more behind the camera.

Producer Jesse L. Lasky saw Wally’s star potential and quickly signed him to a contract. He would star in an eclectic variety of features, such as the Joan of Arc drama Joan the Woman (1916) and Spanish conquistador spectacle The Woman That God Forgot (1917), both costarring opera star Geraldine Farrar. 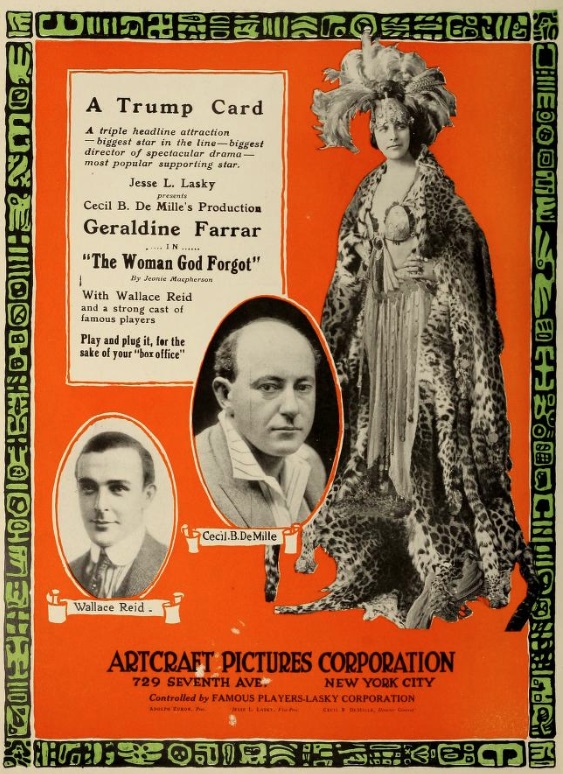 But by the end of the decade Wally was acting in more light comedies than drama, and was enjoying an exciting new specialty: automobile “thrill pictures” like The Roaring Road (1919) and Excuse My Dust (1920). This was a timely sub-genre, for life was still being transformed by the automobile and auto racing had become a popular sport. Wally himself loved cars and racing–one of his reporting jobs had been for Motor Magazine–and he had even attempted to get into the Indianapolis 500. He was known to “race” trains a time or two in his flashy roadster. “My best recreation is to get my hands on the wheel of my car,” he told a writer. “Nothing rests me like that.”

The speed racer in his Stutz Bearcat roadster.

There were also, of course,  the occasional “society” pictures featuring Wally dressed to the nines, much to female picture goers’ delight. The best example might be the frothy The Affairs of Anatol (1921) directed by the great Cecil B. DeMille (and featuring a rather melodramatic scene of a distraught Wally wrecking a parlor). DeMille enjoyed working with the easygoing actor and would call him a “180 pound diamond.”

With Bebe Daniels in The Affairs of Anatol.

By the early 1920s Wally was one of the biggest stars in America, one of the rare stars who appealed to men and women, to young and old equally. He was swoon-worthy to women while also being a man’s man, and his pictures had humor, romance and thrills in equal doses. When fan magazines held one of their “star popularity” contests, the name of Wallace Reid often topped the actor list. He was also popular at the studio. If he wanted an afternoon off, he’d secretly let the crew know and soon all sorts of mysterious mishaps would start plaguing the cameras and the sets–making frustrated directors call it quits early.

Fame didn’t seem to go to his head. He dryly told Picture-Play Magazine in 1921: “I don’t kid myself about my standing with art. I never wanted to be an actor, anyhow…Do you remember when I played a lumberjack in the Peter B. Kyne story? I wore a beard, chewed cigars, and acted as a man would in that environment…But you should have heard the howl from our fans and our salesmen. No more beards or cigar-chewing.” He consistently talked about his true ambition in life–to direct: “I hope to make the name of Wallace Reid, director, stand for a great deal more than Wallace Reid, actor. But man proposes and fate disposes.”

Being a top Hollywood actor was lucrative work, however, and Wally had a growing family to support. Dorothy gave birth to their son Wallace Jr. in 1917 and they would adopt a girl named Betty in 1922. Still, he regarded his studly screen image with amusement, joking to reporters about being “gussied up” and about the studio’s training regimen that kept their investment fit: “For a thousand dollars’ worth of agony I get an inch added to biceps, chest, legs, and shoulders. Thus they thwart my career. I look forward to day when I’m fat, forty, and directing.”

Posing with his family.

But even while giving these hopeful interviews, Wallace Reid, the multi-talented family man and all-American role model and idol of so many, had a miserable secret. Its cause was a trainwreck that occurred during the filming of Valley of the Giants in 1919. En route to their location in Oregon, the cast and crew’s train derailed while crossing a bridge. Wally got a three-inch gash on his scalp and a piece of broken glass cut his arm to the bone. Several others in the company were also injured, and because of their remote location 12 hours passed before help could arrive.

Not wanting to lose time to this calamity, the studio summoned a doctor to give Wally doses of morphine so he could work through the severe pain–not an uncommon prescription in those days. Sadly, and somewhat inevitably, he became addicted.

For the next few years Wally managed to churn out nearly two dozen pictures while quietly trying to conceal his addiction. At the time morphine could cost as much as $80 a hit–the equivalent of $1000 today. Rumors of his affliction would circulate in Hollywood, which his employers would quickly try to tamp down. It’s even been claimed that the studio supplied morphine to keep Wally working, although this is unproven.

By the early 1920s his addiction was taking a terrible toll. Dorothy witnessed her husband’s change with growing alarm: “For no apparently accountable reason he would become irritable, morose, strange…a complete metamorphosis of his former self.” Mood changes were accompanied by paranoia and restlessness, which he tried to quell with drinking. He was also rapidly dropping weight–his gauntness was growing noticeable onscreen. When she confronted him about his problem he denied it at first, but late one night he had a breakdown and confessed: “I thought I was big enough to fight my own battle and win. I thought I could come back alone, and you would never have to know.” 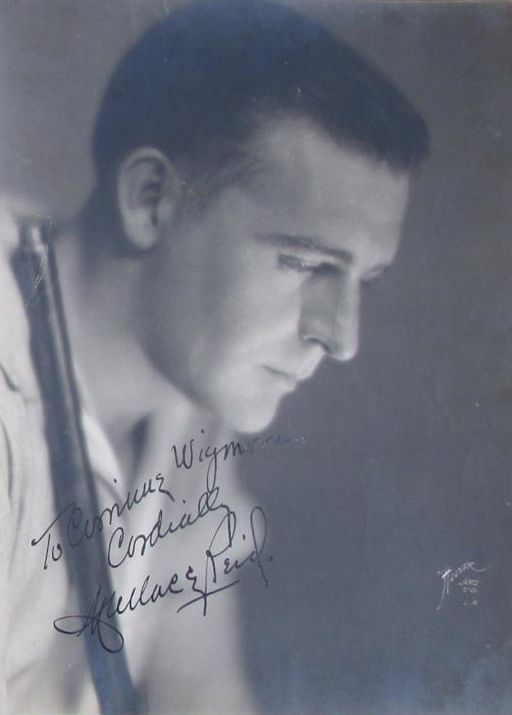 In October of 1922, on the first day of shooting Nobody’s Money, he collapsed. Assistant director Henry Hathaway recalled: “He sort of fumbled about, and bumped into a chair, and then just sat down on the floor and started to cry. They put him in a chair, and he just keeled over. They sent for an ambulance and sent him to the hospital.” There were no resources for drug rehabilitation the way there is today; Wally endured weeks in sanitariums, subjected to sickening “treatments” and being locked in a padded room. Tragically, it was all ineffective, and far too late. Influenza exacerbated his already weakened state, and he passed away on January 19, 1923.

To say that the public and the Hollywood were shocked by the great idol’s death is an understatement; this was the first major scandal involving a star’s drug use. Hundreds of floral arrangements were sent to the Reids’ home, and studios closed during the funeral so Wally’s many friends could pay their respects. 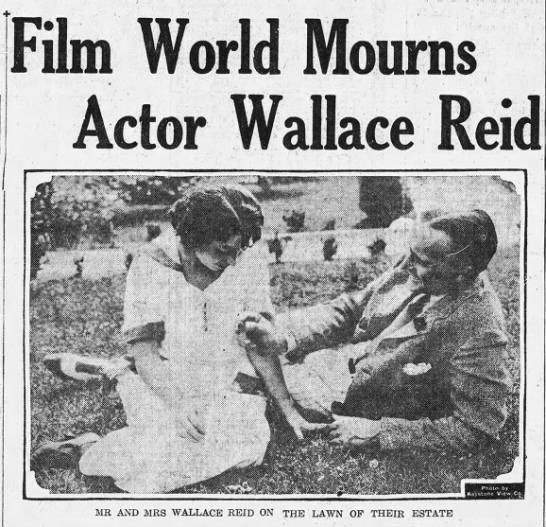 Dorothy struggled after Wally’s death, emotionally and also financially. He had been broke when he died, having spent a fortune on morphine and reportedly having to pay off blackmailers to keep his struggle quiet. Later in 1923, Dorothy would produce and star in the film Human Wreckage warning about the dangers of drug addiction (somewhat to the Reid relatives’ dismay, who thought it would overshadow Wally’s success). She spent much time making public appearances where she spoke against the dangers of “dope,” and attempted to open specialized sanitariums. She would never remarry.

Hollywood was unanimously warm in their memories of Wally, and in the years that passed he was considered a sacrificial lamb of sorts to the evils of addiction. Adela Rogers St. John, usually the first to pounce on unsavory rumors, summed up the fondness for the actor with surprising generosity: “…He was, beyond dispute, the best loved man of his generation. He woke in the heart of the multitude a great affection, a lasting affection, that still gives off fragrance, like crushed lavender. It wasn’t only women who loved them, though they did…Men loved him, boys, old people, children.

“There was something about Wally Reid that fitted into the dreams of every heart. His life story is important because of that love and because his death grieved and bewildered and shocked the whole world.” 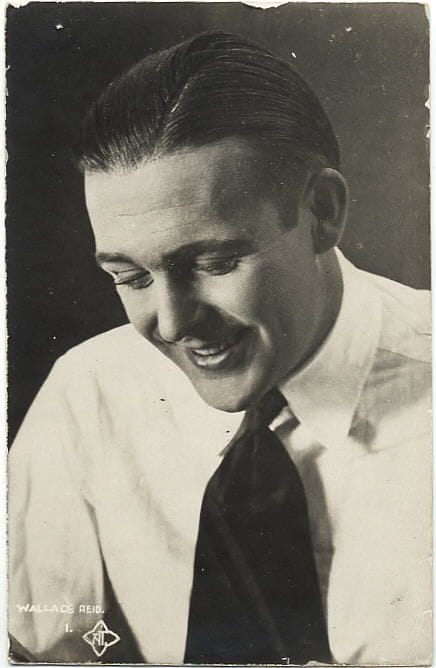 Peltret, Elizabeth. “Girls I Have Made Love To.” Motion Picture Magazine, September 1919.