If you’re in need of a major distraction, look no further than these curious examples of silent Soviet animation–because you’ll find it impossible to look away. But a word of caution: if it’s bedtime and you’ve just eaten something weird, believe me, these will not help the nightmares. Consider yourself forewarned. Also, just wanted to say right away: I am sorry.

Feeling okay? Good, you’ve made it through level 1!

Yes, the pot-bellied eye-rolling lout who hits on floozies and briefly turns into a pig is, indeed, supposed to be one of those darn capitalists. How could you tell? Fortunately a sturdy Soviet Worker is around to mock clergymen and morph with another character into a monster who stomps holes in capitalist pigs’ bellies! (Gold coins spurt out, so it’s all good.)

The animation is okay, but it’s also the same style that Winsor McCay was churning out a full ten years earlier. Well, at least the film ends with characters transforming into a Christmas tree, Christmas trees always cheer people up–wait a minute. WAIT A MINUTE. Oh no. Oh NO!!!

I couldn’t find separate videos for these shorts, so this is a 2-for-1 deal. No doubt you’re mighty grateful, heh heh. I’m not sure if the tiny Kino-Pravda short has its name in the beginning or if that’s just an explanatory title card. So “Unknown Vertov work” it is! By the way, I totally thought that was Lenin getting arrows shot at him, and was most terribly confused, but that’s likely supposed to be another greedy capitalist (why isn’t he fatter? If he was fatter I’d know for sure).

Short #2 is yet another Soviet Tale as Old as Time: the demand that workers join cooperatives lest the greedy local merchants (you know, the guys running little general stores and such) devour everything like the ravaging beasts they are. We’re also taught that if you’re a peasant and your horse dies, and there are other peasants that still have live horses, that this is unfair, because as everyone knows it never occurs to peasants to help out their less fortunate neighbors unless the government makes them. Join the cooperatives! *Cue Soviet anthem*

At least the animation is interesting, it uses cutouts in a fairly clever way that probably saved some dough at the time, too. My gosh, I’ve watched so much Soviet pro-collective propaganda in the last few months. So much. So tired.

Fasten your seatbelts, kids. This is the main reason I’m sorry.

Sweet baby Buster Keaton–why, why WHY?! And why is Tiny Tim’s version of Living in the Sunlight playing on an endless loop in my head? HELP ME!!!

So congrats are in order–you made it through that overdose of a film! Just like I managed to do more than one time! Heh heh. Heh. If you need to, feel free to sit in a corner for awhile and drink a glass of water. Then try vacuuming a few rugs, or doing some math. Your brain needs to settle, so please, take it easy.

To its credit, I’ve never seen cutout animation quite like this before. It’s, uh, creative. If you put those Monty Python animations and South Park in a blender with a generous dose of acid, this short would be the likely result. I’ve never done drugs in my life, and never wanted to, and I most certainly never will now because what’s the freaking point of it all if I can just watch Interplanetary Revolution?!

I want to end this post with a short that will leave you some hope for the future. One of Many it is! Unlike the brain-punching horrors we just endured, this one’s actually quite charming. A young movie fan gets the thrill of her life when she gets to see Mary Pickford and Douglas Fairbanks in person (during the famed couple’s mid-1920s Russia tour–there’s a tiny bit of documentary footage, too). Coming home breathless with excitement, the girl falls asleep and dreams of visiting Hollywood.

The “Hollywood” portions are all animated, and various personalities make cameos: D.W. Griffith, Chaplin, Keaton and Lloyd, Tom Mix, Fairbanks, and Pickford. Plus we see the Danish duo Pat and Patachon, a Laurel and Hardy-like comedy team who were popular in Europe at the time (I guess they were visiting Hollywood too). Notice how Buster has on his Three Ages caveman getup.

So yes, this short is awesome. The animation is a little crude, but not in a disturbing open-Pandora’s-Box sort of way. Which is always nice! The blend of live action and animation has a lot of charm and I love the gal’s black and white dress. As a whole, it’s a nice palate cleanser.

We made it through the wilderness–we made it through! And now that we’ve shared this experience together, we can collectively never forget it (maybe we can consider ourselves a support group?).

And once again–I do apologize. 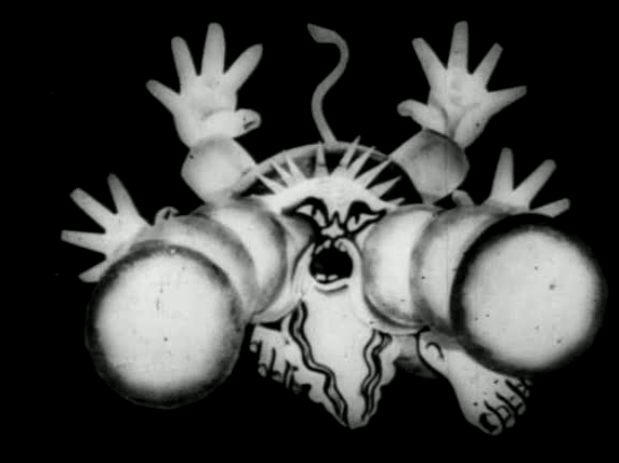