So if this was a normal spring, I’d be attending the San Francisco Silent Film Festival right now, sitting in my usual spot in the darkened Castro Theater.  But just in case you haven’t heard, it’s not a normal spring, and my lovely festival has been postponed until November (fingers crossed me and my pals will all be there!). This is doubly sad since I usually head to Hollywood for a few day afterwards. Indeed, my soul cries out for those palm trees, that smell of blooming jasmine, those Walk of Fame stars,  even that weird jumble of street performers and tourists on Hollywood Boulevard getting bottlenecked by dumb sidewalk vendors selling cheap toys no one ever, ever needs. 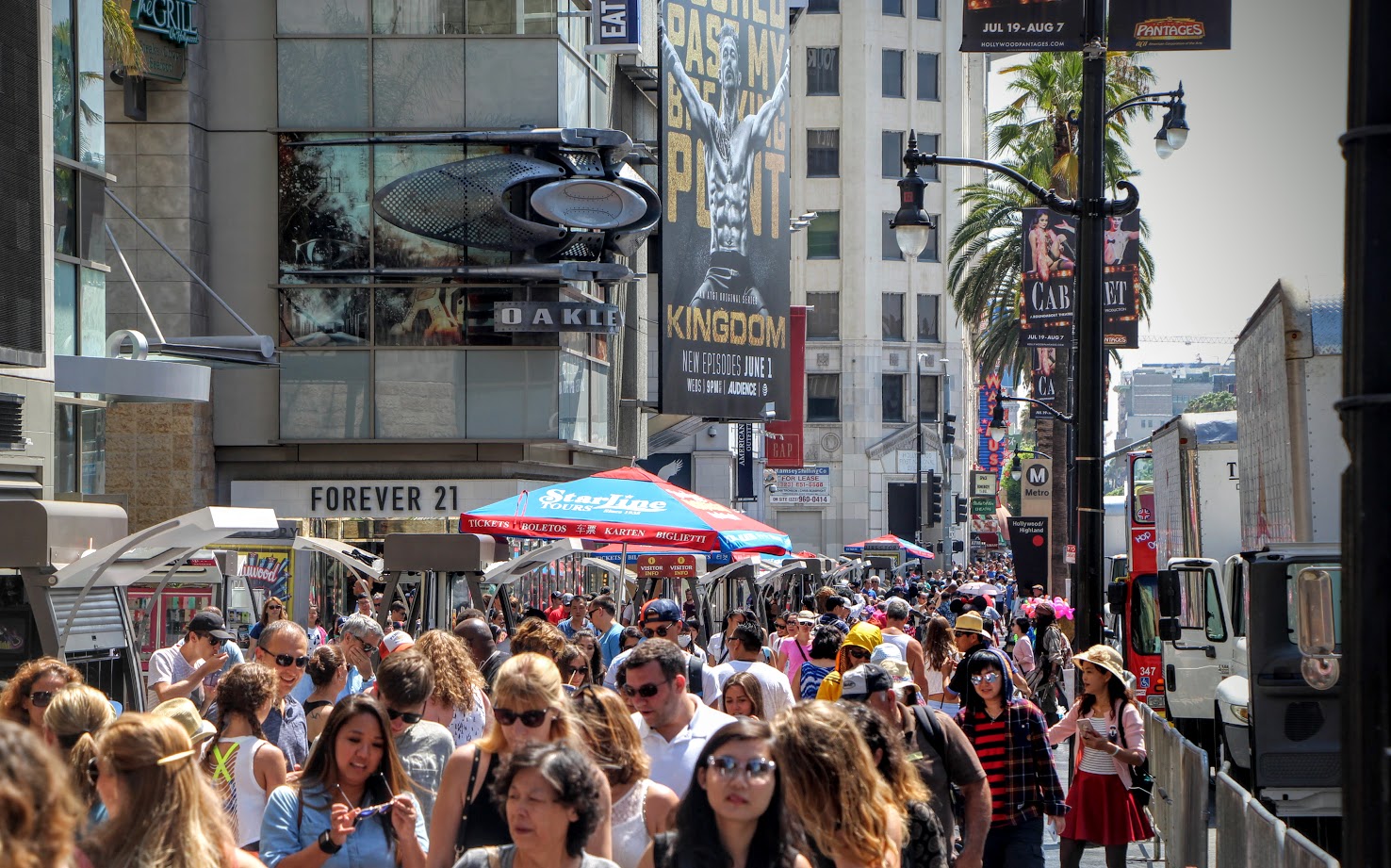 You can’t see me because a vendor took up half the sidewalk to sell foam plastic emojis and I got trampled.

So in lieu of film festival revelries, I thought it’d be fun to share some of my fondest silent film-related travel memories (so far)! I love, love, love to travel, and some of my favorite trips have involved visiting sites related to the silent era. If there’s even a slight chance to stand on a street corner where Harold Lloyd once filmed or take in a rare exhibit of German Expressionist memorabilia, I’m there! So here are my reminisces. And please, when you’re done reading feel free to share some of your silent-themed travel experiences too!

A few years ago, after saving up I decided to realize one of my bucket list goals: to backpack through Western Europe!  Part of this trip was spent in glorious Paris, of course. Aside from the usual “musts” like the Louvre, I just had to visit the Cinémathèque Française, one of the world’s largest film archives.

This was early in my silent film obsession so the main reason for my visit (aside from just getting to be there!) was its museum. The Cinémathèque has a fabulous museum of cinema artifacts, everything from 18th century optical illusion toys to Theda Bara’s jewelry to the mummified head from Psycho. Oh my stars, I was in awe. And there was even a temporary exhibit devoted to–get this–Méliès’s A Trip to the Moon! There was Méliès concept art, drawings, models–my gosh, you guys, could that be more perfect? A once-in-a-lifetime opportunity to see them!

Oh, and as a bonus, there was a special Tim Burton exhibit there too! So in the same day I saw original Méliès drawings and a number of Jack Skellington stop motion puppet heads, among other wondrous things. 😀

Getting As Close As Legally Possible To Buster’s Italian Villa

On my first visit to Hollywood, a friend and fellow Buster fanatic kindly offered to pick me up from the airport. En route to my hostel, as I was trying to wrap my head around the fact that we were driving on Sunset Boulevard, she took me on a little impromptu tour of the neighborhoods. At one point we drove up a small, windy road through what was evidently a very fancy neighborhood. It ended in a little cul-de-sac and the gated entrance to a driveway. Hmm, where were we? Wait, what was the name of the road again??

Why, we were in front of the driveway that lead to Buster Keaton’s 1920s mansion, the famous Italian Villa!! That close!! And then an amiable but no-nonsense guard came out of a little building by the gate (yes, the people who own the Villa now are loaded) and asked us to stop taking pictures. Ah well. I’d already taken a picture of the mailbox:

And that’s how I got as close as legally possible to the Italian Villa. I must sadly inform my fellow fans that it’s not visible from anywhere along the road, there’s thick vegetation and probably some sort of wall involved. But we were close!!

On that same “first time in Hollywood” trip, I got on a bus and hied myself to Echo Park. It was one of the first places I wanted to see in L.A.–so many early Keystone comedies had been filmed there. There were the palm trees, there was the lake, there were the little paths that wound around it. Precious ground! Plus, it’s a genuinely lovely park.

That bridge replaces an older one that can be seen in Mabel’s Married Life (1914)!

There’s something so special about visiting film locations, especially when so many ancient films took advantage of public places!

Then I walked a few blocks to a special site–the very hallowed ground where the Keystone Film Company studio once stood. There were those same hills that were in so many old, old comedies–and probably some of the same Craftsman bungalows too! Today you’d never know the site was a thriving studio. A Jack in the Box stands where the dressing rooms once were, but happily this big concrete stage does survive. (It’s now a storage facility and it has a plaque.)

I have yet to worm my way in here, but–one day! Oh, and I ate at the Jack-in-the-Box. And saved the liner on my plastic tray.

Going To The Buster Keaton Convention In 2017

Regular readers will remember that I’ve covered my experience at this lauded convention in detail some time back–link is here–so right now I’ll just say that every second of that weekend was perfect, just perfect.

Dining At Musso And Frank’s

After my first time researching at the Margaret Herrick Library (man, I could really add to this list!), a fitting reward was needed. What could be better than dinner at the oldest restaurant in Hollywood, Musso & Frank’s? I kid you not, reader, the interior was everything I hoped it would be. Wood paneling, red leather booths, waiters in red jackets,  steaks cooking on a grill so old the bars were wavy from decades of heat–it was easy to believe that every Hollywood star, director, writer and musician in the last century has eaten there at some point! It was like stepping back in time.

I sat at the counter in front of the grill and ordered a highball and Chaplin’s favorite–lamb kidneys with bacon (thanks, Charlie). The service was impeccable, the food delish (well, for kidneys) and I knew it would be the first of many visits. (Two and counting so far!)

One of my favorite places in all of L.A. is the lobby of the historic 1926 Roosevelt Hotel (the building was partially financed by Mary Pickford and Douglas Fairbanks!). You know those party scenes in old movies where people in tuxes and satin float along tile floors in big, columned ballrooms? This is that place, for real!! With painted ceilings, too. The evening I went to Musso & Frank’s, an after dinner drink in Roosevelt lobby seemed like an ideal way to end the night (I wasn’t staying there but non-guests can always enjoy the lobby). I got a sparkling rosé (which was not cheap but a generous pour) and relaxed on a comfy leather couch. There were only a few other people around and a small band was playing music in the corner, and I sipped my rosé and felt utterly content with the world. 10/10, would recommend!

I’ve been to Hollywood a number of times by now, but that first trip will always be the best one. Many fans like to pay respects to stars buried in L.A.’s cemeteries, and I knew who to visit first.

I took the bus to what I assumed was a stop close to the Forest Lawn Hollywood Hills cemetery–which it wasn’t. After a very long walk, I entered the cemetery itself, and then there was another very long walk to Buster’s gravesite. (Those L.A. cemeteries are massive!) Well, the pilgrimage paid off. There he was. Yes, there were tears!

I cleaned up the plaque and left the little mementos you see in the picture (some on behalf of friends). I reflected for awhile. To call it an emotional experience was an understatement. Oh, and when you get hold of yourself and walk a bit further into the cemetery, just past the George Washington statue you’ll find Stan Laurel’s grave. (!) If you haven’t visited this cemetery just…just be prepared for a lot of emotions all around!

‘Twas Sunday night at the 2018 San Francisco Silent Film Festival, and the very last film showing–Battling Butler–had just ended. I was outside by the Castro Theater doors, chatting with my fellow silent fan pals, when my friend John Bengtson (bless his soul) popped his head through the door and asked would I like to meet Kevin? That would be the legendary Kevin Brownlow, who was at the festival that year! Yes please!

He was as approachable and charming as you’d expect, and we managed to chat about Louise Fazenda for a bit before being interrupted by someone giving a speech (this was during the festival’s after party in the crowded mezzanine). But the story doesn’t end there–I kid you not, Leonard Maltin (who attends the festival every year!) strolled over and he and Kevin start chatting RIGHT IN FRONT OF ME.

So that’s one of the most special moments of my life as a silent film fan.

Now, what about you guys? Have you visited any special filming locations? Have any great stories about meeting silent film actors or directors? Have any wacky experiences on Hollywood Boulevard? Please share, I’d love to hear about them!!

6 thoughts on “My Favorite Silent Film-Related Travel Memories! (So Far)”