You might’ve read my earlier post on the new book Chase!, the first book ever to be written about the Keystone Kops. You might also remember that I got to contribute a chapter! (This isn’t just a shameless plug, I swear–keep reading!) During the process of planning Chase!, editor Lon Davis mentioned to me in an email that he was going to be viewing a fragment of In the Clutches of a Gang at the Academy of Motion Picture Arts and Sciences in Los Angeles. My reaction was basically: “What what WHAT?! That film? A piece of that one is still around?! WHAT!!!”

He reassured me that it was so, that a snippet of In the Clutches of a Gang does exist. He would include a writeup of his experience viewing the fragment in Chase!, which I’ll be referring to later on. How incredible is that?

So what’s the story behind In the Clutches of a Gang? When it was released on January 17 1914, Mack Sennett’s Keystone Film Company had already been wildly prolific for several years. The studio’s most popular stars were Ford Sterling, Mabel Normand and Roscoe Arbuckle, and the vast majority of Keystone products were split-reel (five or six minute) and one-reel (ten minute) films, often made in a few days with streets or city parks serving as locations.

In December 1913 Sennett decided to release a “comedy special”  called Zuzu the Band Leader (1913), which would be a full two reels long–twenty whole minutes of laughter! Ford Sterling played the Zuzu of the title (most characters in Keystones didn’t have names other than “the Girl” or “Fatty,” so that was something) and it costarred Mabel Normand. The plot involved the theatrical bandleader Zuzu, idol of countless women, being idolized by the rube-ish Mabel. Alas, he rejects her because she has crossed eyes. She gets revenge with the help of a friend and some explosives. Obviously, it was a hit!

In the Clutches of a Gang was a second two-reel comedy special that was released a couple weeks later, sometimes described as a sequel to Zuzu–although Ford Sterling seems to be the only thing the two have in common. In the Clutches again features Sterling as the lead, this time as the police chief “Chief Teheezel.” George Nichols was the director, and Virginia Kirtley played the love interest. Thanks to That One Famous Still, most of the other cops who appear in the film have been identified: Roscoe Arbuckle, Al St. John, Hank Mann, Marvin Cox, Bobby Dunn, George Jeske, Rube Miller and Edgar Kennedy. (Supporting actors were unbilled, after all, especially if they played Keystone Kops.)

This time the plot revolved around Sterling’s character trying not to be incompetent: after accidentally arresting the mayor, Chief Teheezel decides to restore his good name by taking down a notorious gang. Some water scenes were apparently taken at Newport Harbor. It seems to have been well received–here’s one review I found:

Aside from That One Famous Still, I’ve only found a couple other images from In the Clutches of a Gang. These two from Reel Life, January 3 1914:

Speaking of That One Famous still, so far I (surprisingly) haven’t found it in any 1914 ads, so I’m guessing it could’ve been used for lobby displays.

Anyhoo, with all this in mind, you can imagine how exciting it was to hear about the Fragment That Lived (I’m really feeling those capital letters today). Lon Davis provided a detailed description of it in Chase!–apparently, we can thank film piracy for its survival.

As Davis explained, during the late 1910s Charlie Chaplin films were such huge moneymakers that some studios did whatever they could to cash in on the craze. In one particularly shameless ploy, an obscure studio decided to mush together clips from the Keystone films Fatty and Mabel Adrift (1916), The New Janitor (1914) starring Chaplin, and–that’s right!–In the Clutches of a Gang. They called their new masterpiece Charley, the Gang Leader. (The “Charley” spelling was their foolproof method of thwarting copyright infringement.) About five minutes of this cash grab has survived, containing the only existing footage from In the Clutches of a Gang.

The little bits and pieces of footage are apparently pretty clear. Some of the Kops are shown in a rowboat “battling ocean waves,” and another scene shows Chief Teheezel pacing back and forth. And amazingly, one scene shows the police station set with Teheezel and his bumbling cops, just like That One Famous Still (although the cops are standing in a different order). Davis wrote:

What struck me immediately was that several of the surviving shots featured the exact lineup from that famous still, only the formerly still figures were moving animatedly, standing, saluting, raising their truncheons in unison, and performing other bits of business.

Now, what excites me is knowing that the famous Keystone Kops image really did represent an actual scene in the film. This wasn’t always the case for silent era publicity stills, especially ones for comedies (this can confuse fans nowadays, who invariably wonder if these stills represent “lost” or deleted scenes). Some stills were simply the result of clowning on the sets, finding funny images that fit the films’ themes. 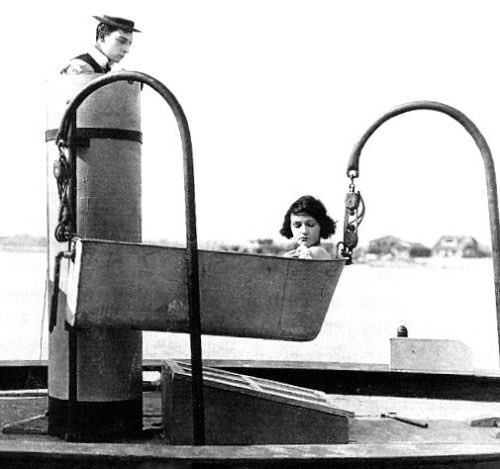 Buster and Sybil Seely in a still for The Boat–a still, not a scene.

So that’s the history, both past and present, of a comedy short we all thought was completely lost for all these years. For even more details about Davis’s adventure at the Academy of Motion Picture Arts and Sciences, please accept this humble plug for CHASE! A Tribute to the Keystone Cops. And just think, there really was a Keystone short featuring the world’s most famous police force crammed in their little police station awaiting Chief Teheezel’s orders, just like the photo. I don’t know about you, but that gives me the warm fuzzies!