I may have mentioned my great love for the San Francisco Silent Film Festival, which I try my darnest to attend every year (I also try my darnest to see every single showing–last year I finally succeeded!). Probably mentioned it once or twice…or fifty times. (They deserve frequent shoutouts!)

One of the many bonuses of this grand festival is their annual “Amazing Tales From the Archives” presentation, which is always free to attend and always full of interesting info on the exciting projects archivists are working on. The 2019 festival had one presentation that charmed my socks off: about Léon Beaulieu’s teeny tiny cinema flipbooks he manufactured for his unique 1890s “pocket cinematograph.” If you’ve studied Victorian cinema–or visited an arcade that has antique games–you’ll be familiar with the Mutoscope, an early optical illusion toy. Individual frames from a snippet of film were printed on cards and fastened to a rolodex-like device. When you peered into the viewer and turned a crank, the cards would flip past your eyes, creating the illusion of a short film. 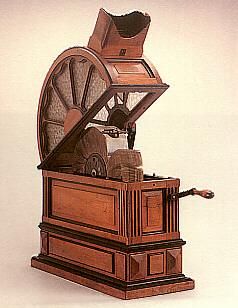 Victorian inventors competed to come up with their own variations on optical illusion toys like the Mutoscope. One such inventor was Léon Beaulieu. Beaulieu is a very obscure figure, and the scarce information on his life paints a sketchy picture. He seems to have been orphaned as a teen, sadly, and spent time in the military before being jailed for disorderly conduct. He would be jailed several more times for both assault and fraud, and addresses for his Paris-based business changed no less than five times.

Beaulieu had begun manufacturing tiny flipbooks in 1896.  Flipbooks had been popular since the 1860s, and Beaulieu’s reproduced brief scenes from films by directors like Georges Méliès. In 1898 he patented “a mechanical stripper for pocket cinematograph” (that title hasn’t aged well). This was a simple, portable device used to view his flipbooks.

Beaulieu may have been a shady character but his film flipbooks were, as you’ve probably guessed, darling. Here’s a sample: If I ever ran across some of these tucked away in a dusty box in an overstuffed antique store, I would just die.

But what, there’s more! Beaulieu’s flipbooks aren’t just any old film ephemera; amazingly, many that survive contain the world’s only known traces of lost Victorian films. Researcher Thierry Lecointe, studying the flipbook collection of historian Pascal Fouché, discovered that 22 out of 24 Beaulieu flipbooks in the collection contained snippets of lost films. At least seven are confirmed to come from Méliès films. Isn’t that remarkable? Happily, in the last few years, the pages of these tiny treasures have been carefully photographed and animated for us to see today. You can view some of these charming snippets on the San Francisco Silent Film Festival site here.

Screenshot from a flipbook called La Méprise, thought to be from a Méliès film.

9 thoughts on “The Wonder Of Léon Beaulieu’s “Pocket Cinematographs””