Does your life seem a little too normal right now? (I know, I know–“so to speak.”) Are you longing for something more…surreal? Do the people around you have a frustrating lack of pancake makeup and fake potbellies? Does your furniture just sit there? Wanting to have a trippy experience without getting…well…trippy?

This was probably the most down-to-earth intro I could give to this sentence: Then The Mishaps of Musty Suffer series may be for you!! 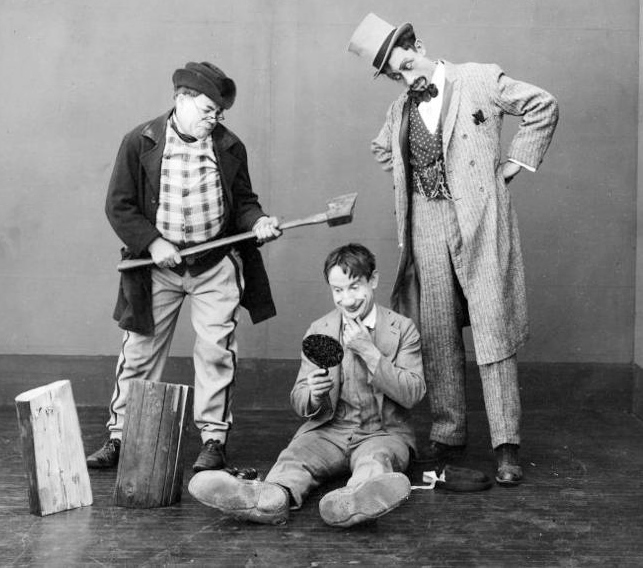 Now, I’m betting 99.5% of you just asked, “Who or what the heck is Musty Suffer?” I understand, my friends, for I have been there. For all my wanderings through the zany universe of silent film comedy, I had never, ever heard of the comedian Musty Suffer before Undercrank Productions successfully Kickstarted a Musty DVD series a few years ago. And now that I’ve watched him, I, well, definitely can’t forget him.

One of the most bizarre, surreal blends of vaudeville and the circus that my eyes have ever beheld, the 1916-17 Musty Suffer series is basically the final level in a “weird silent comedy” trivia game (the one you have to beat to become Film History Champion, or “A Kevin Brownlow”). See, sometimes I’ll find a really odd silent film–maybe by Charley Bowers or some long-forgotten low-budget company–and I’ll file it away with the idea of showing it someone someday (preferably when they aren’t ready for it). Musty Suffer? I…got nuthin’. Is his series brilliant? Is it terrible? It is hilarious? Confusing? Magical? Avant-garde? Cartoony? Weirdly and blithely of-its-time? Is this where I check “all of the above”? And who will ever be ready for it?! 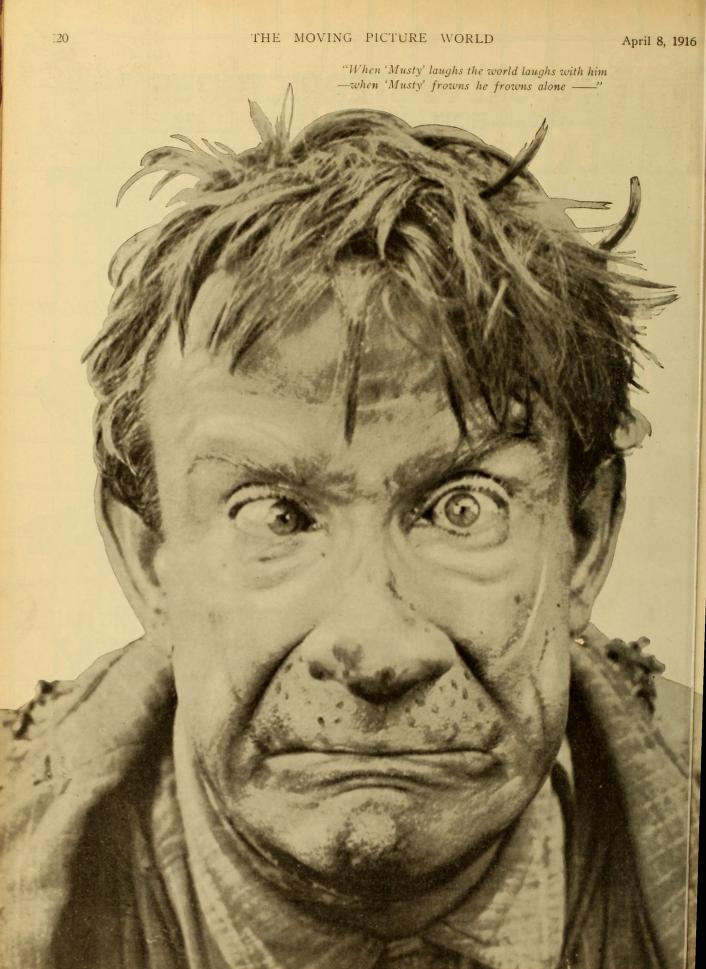 Not even Musty, presumably.

But if I were to dare introduce someone to The Mishaps of Musty Suffer, which short would I choose? Just Imagination (1916)–for sure. Of all Watson’s available shorts (also called “whirls”), this is my favorite, a unique slice of the vaudeville era with a helping of comic strips.

So, some background info is required (practically by law). Musty’s real name was Harry Watson, Jr., and with his expressive, rubbery face he was born to be a clown. He worked his way up from the Ringling Bros. Circus to a thriving career in vaudeville, forming an act with George Bickel and Ed Lee Wrothe that made it all the way to Broadway. He and Bickel subsequently teamed up and performed in the Ziegfeld Follies. After the Follies, where else was a slapstick comedian to go but films? 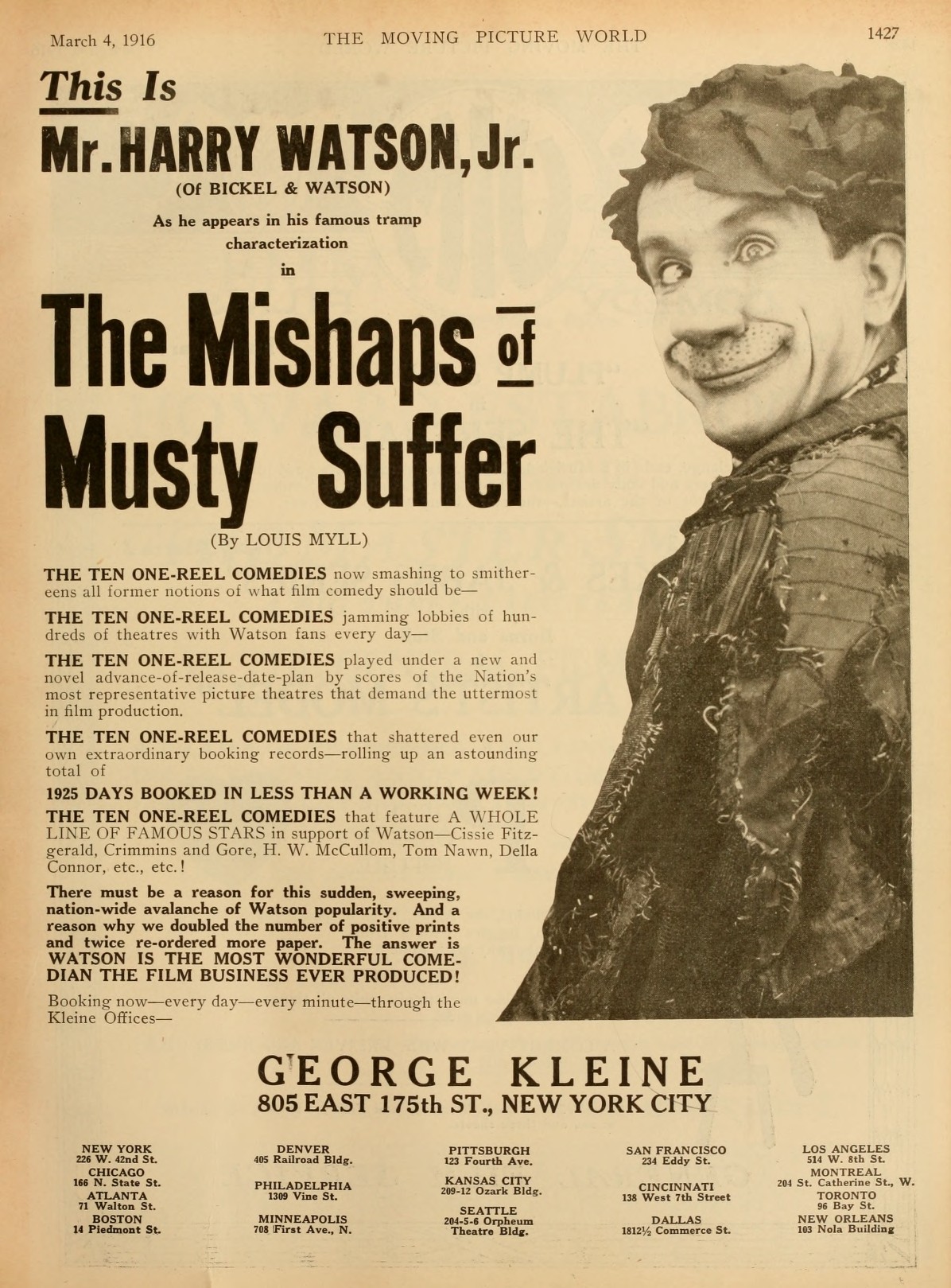 After initially making a feature-length film starring Watson, the George Kleine studio shelved it and instead started work on a one-reel comedy serial following a big-nosed tramp named Musty Suffer and his attempts to find odd jobs. (Watson had apparently portrayed a tramp in the Follies). To say it was imaginative is an understatement–apparently, no idea was considered too off-the-wall, and no gag too outrageous. As Steve Massa described it in the companion booklet to Undercrank’s set: “Take one hapless tramp who dreas of bathing in bathtubs of beer, suffers fromm tenacious hookworms and regularly undergoes reconstructive surgery with blunt instruments but always lives to tell about it in the next episode, and you have The Mishaps of Musty Suffer.” Contemporary ads happily proclaimed: “Adapted from nothing, founded on fancy, produced with one ambition only–to make you smile.”

The series with quite popular, especially with children apparently, who dutifully came back each week to see what the hapless tramp was up to. One week Musty might be a mischievous bellhop at a hotel, in another he might become a messenger boy, in another he might wreak havoc at one of those automat restaurants. Just Imagination showcases one of the most unusual jobs–being the subject of various wacky experiments about “the power of the imagination,” conducted by the gleeful “Dr. Hickory” and “Dr. Nut.”

I’ll try to synopsize the short for you as clearly as possible: It opens with Musty sleeping in the middle of a road and getting scooped up by a skinny farmer’s wheelbarrow. The farmer stops to get a drink and Musty sneaks away, but the farmer is so revived by the drink that he makes the wheelbarrow fly into the air and it ends up knocking Musty out (I’m trying so hard to be clear). Soldiers find the unconscious Musty and haul him to jail, but fortunately the jail bars are bendy so he quickly escapes (I’m trying, I swear). While wishing he could find a job, a fairy tramp appears (yes a fairy tramp) and gently leads Musty to a sign advertising for a “refined young man” to assist in experiments about imagination. Musty dances with a dummy modelling a new suit and the suit is magically whirled onto his body (stay with me) and he gets the job. But the experiments, presided over by two gleeful doctors, are a little more than Musty bargained for as he attempts to eat food that disappears, sees furniture whirl around a room as if by magic, and has a coffee pot turn into a live goose in his hand. (To name a few of the goings-on.)

There’s three main reasons why I dig this short. The first is its glimpse into the long-gone world of vaudeville and the circus, complete with crazy costumes and exaggerated features. These seem to have been lifted from the 1910s stage and plopped on film with no apologies, fake tummies, funny hats and all. Title cards charmingly introduce actors as, say, “Dan Crimmins, of Crimmins & Gore,” referencing their well-known acts. The series is riddled with “grotesques”–one of the more bizarre personalities is Maxfield Moree (who portrays the farmer chap) who’s apparently determined to be a living stick figure, the kind that could only spring forth from vaudeville.

As seen in another Musty short.

The second reason is the great chemistry between Watson and the two actors who play the doctors, H.H. McCollum and Dan Crimmins. Seasoned performers who are clearly having fun with their work (they insert some random touches like having the doctors move in sync at times), their comic timing and pantomime skills are a delight, especially in the scene where Musty plays an imaginary game of pool. And now I’m brought to my third reason–the visuals! I love McCollum’s top hat and Crimmins’s plaid vest, and how their looks pop against the simple background in many scenes. I could study the stills from this short like pieces of art.

Let’s contemplate this one again.

The utter weirdness of the Musty series might be a little much for some, but if you like obscure, well–here’s the dictionary definition of it! Also recommended for anyone with even a passing interest in vaudeville. FYI, one oddly tinted version of Just Imagination is on YouTube but it has one of those terrible modern accompaniments that makes me want to rend my garment. If you don’t mind me adding a (free!) plug, don’t bother with any subpar prints and get Undercrank’s lovely set instead–after all, you wouldn’t get to see this series at all without their hard work, and who doesn’t love adding to their silent comedy library?