One fun aspect of exploring the work of long-ago film studios is getting to know their stock companies. This usually happens unintentionally–you’ll be watching a few shorts about family farms being threatened by Evil Mortgage Collectors or romantic rivals quarreling in public parks, and you start seeing the same bit players pop up over and over ahead. It almost becomes a game–when will the skinny young man or matronly lady pop up again?

The Keystone Film Company had a multitude of bit players, sometimes playing multiple tiny roles in the same film (although admittedly, so did some of the main actors…). Some players blurred together, but one little guy had a distinctly flat nose (previously broken, apparently) that always made him easy to spot–Joe Bordeaux. He popped up pretty often in the Keystones, and then when I watched Arbuckle’s Comique series I realized he was in those too. 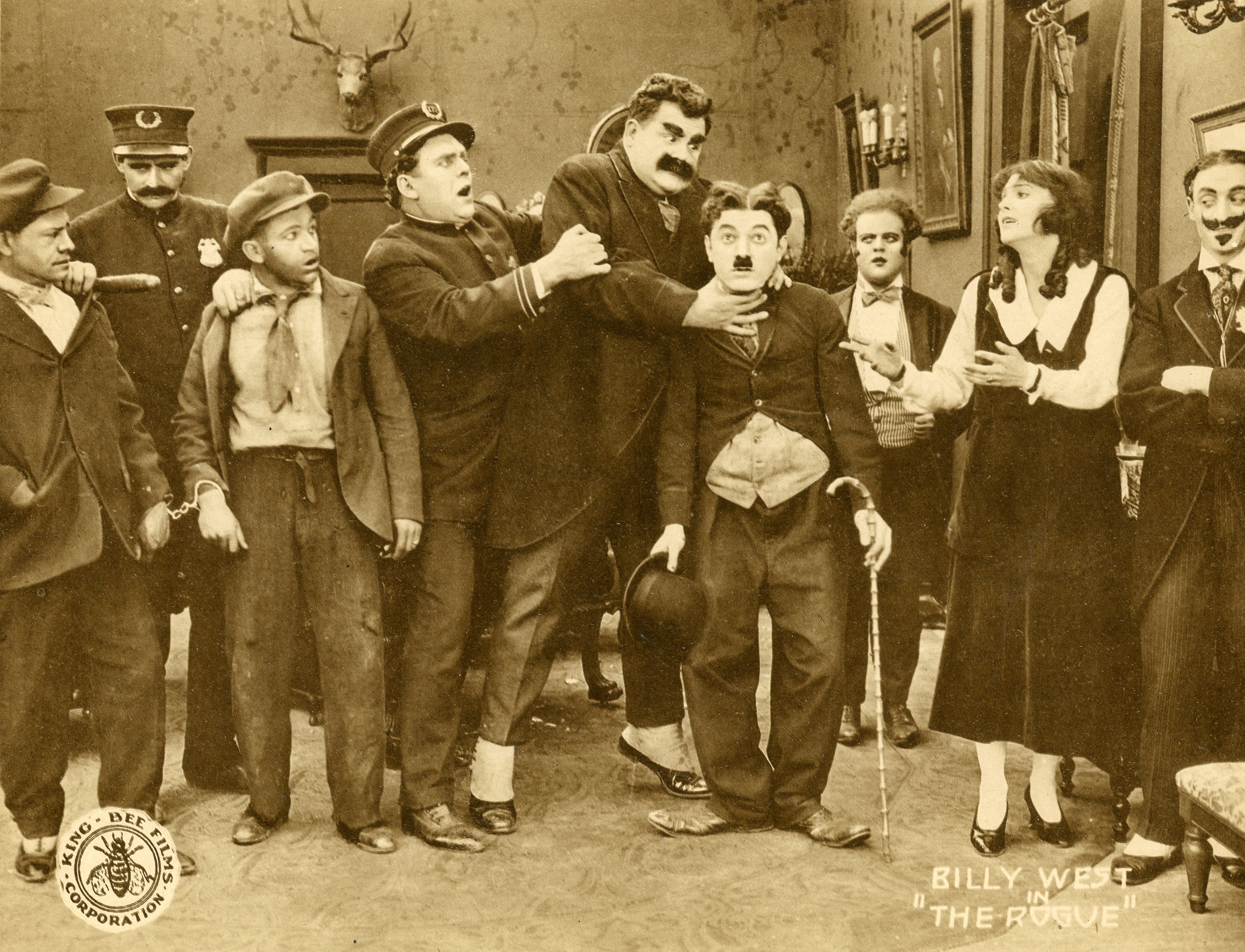 Not to mention appearing with Chaplin knockoff Billy West. (Bordeaux is third from the left.)

Then I started spotting him when I least expected it–in a Harry Langdon talkie short, in a bit role in Steamboat Bill Jr. It gave the strange illusion that somehow, this little guy was in everything. I confess that after awhile, when he’d pop up onscreen I’d shout “Joe Bordeaux!” and take a drink (alcohol is optional, by the way–water works just fine for the Joe Bordeaux drinking game).

One day the thought occurred to me–Bordeaux had appeared in Keaton’s very first films, and was in several scenes with him. In hindsight, that’s quite an honor. And his Keystone appearances proved that he worked closely with Arbuckle too, another classic comedy great. Who else had Bordeaux worked with? 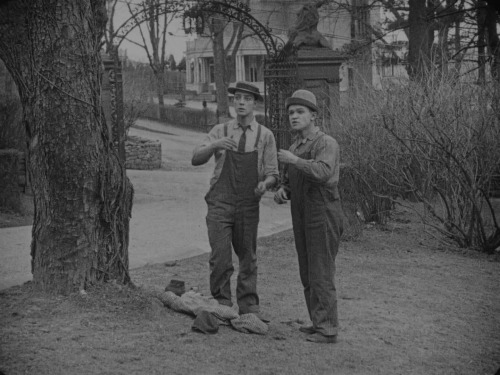 Here was quite a resume, and all from a bit player. Details on Bordeaux’s life were few and far between, but trying to uncover them was a good research challenge. Recently, I decided to give it another shot. The challenge was still a tough one, but I’m happy to present what I’ve found. 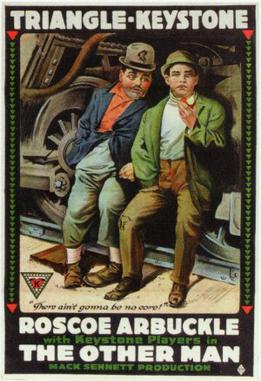 For instance, I think Bordeaux is on the right in this poster for The Other Man (1916).

Joseph Emil Bordeaux was born March 9, 1886 to French-Canadian parents in Valley Field, Canada. Precisely which Valley Field is a good question–there were several–but it was possibly Salaberry-de-Vallyfield in Quebec. His family moved to Colorado when he was very young, and many sources would list “Colorado” as his birthplace.

Little is known about his life prior to joining Keystone around 1914. We do know he had been working for Roscoe Arbuckle as a chauffeur before starting work in films. Interestingly, I did find a newspaper clipping from March 1911 about a car accident in San Francisco involving a chauffeur named “Joe Bordeau.” Bordeau was driving a touring car when it blew a tire halfway through a turn, flipping over and throwing out the passengers. One man died on the scene and Bordeau was taken to the hospital for a fractured skull and internal injuries. There’s no way of knowing if Bordeau was our Joe Bordeaux, of course, but the possibility that a man who nearly died of serious head injuries ended up working at a bone-breaking studio like Keystone sure is food for thought.

At Keystone Bordeaux was a stunt man, bit player and the head property man–“property man” being the most important studio job that no one ever talks about. In charge of a studio’s entire dizzying collection of props, a property man had to produce whatever crazy object a director would need on very short notice–including rounding up performing animals. Thinking outside the box was definitely a requirement. “A prop man must have the instincts of an amateur detective,” one 1937 book explained. “On a few hours’ notice he must ferret out supplies of the most incredible things. No one knows for what a director may ask in his desire to make a setting strikingly authentic.” 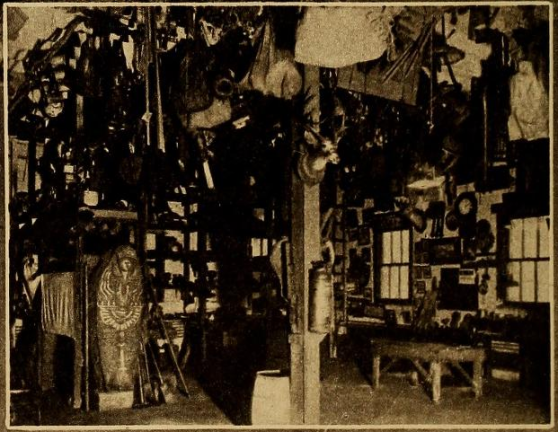 One such property room at Vitagraph in the late 1910s.

Just keeping track of all the objects in a prop room was a tough job. Here’s an interesting excerpt from a 1922 book on work in the picture business:

Picture a curiosity shop and you can visualize clearly the property room of a large studio. In it, one will find everything from a suit of armor to a canary bird’s nest…The term “prop” really covers everything. Sometimes it means a stable, another time a bull dog, a box of candy or an automobile, a work of art, of any of a million other things. In a motion picture studio, a “prop” means some object that is used in the making of a picture.

To qualify for fitness in being master of all this vast domain of materials, one must indeed have special training. The property man must be a very resourceful person, for it is up to him to know the location of any one of a thousand articles in his property room, and to be able to place his hand on almost anything that a director could call for in the work of filming a motion picture.

Bordeaux worked in this capacity until 1916 while also making appearances in numerous shorts–including stints as one of the ubiquitous Keystone Kops. His small frame, decent pratfalling skills and willingness to take various bumps and bruises constantly came in handy. His biggest roles were probably as a crook in Wished on Mabel (1915) and a romantic rival in When Love Took Wings (1915), and it’s probably no coincidence that both were directed by his friend Arbuckle. 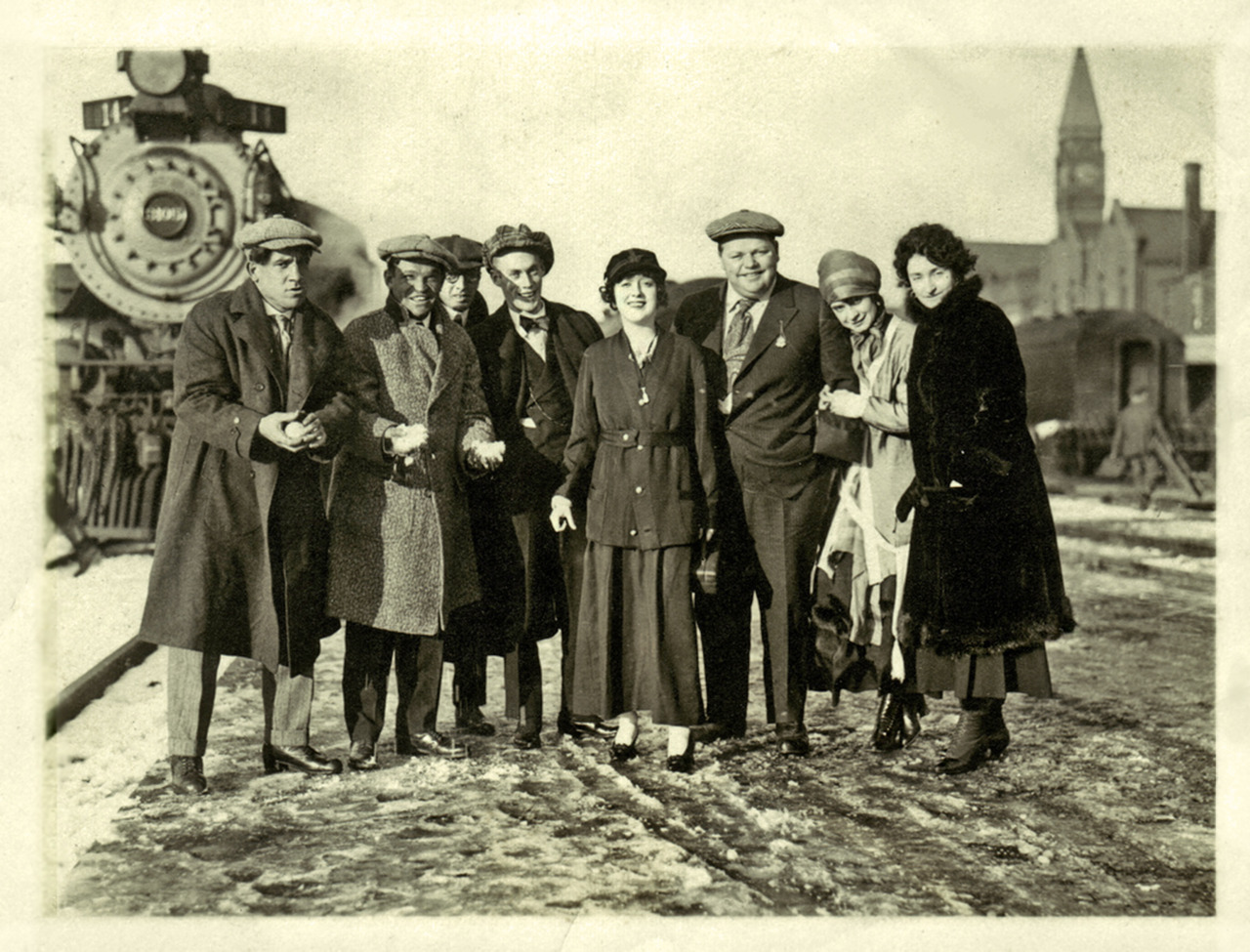 Like most bit players, Bordeaux didn’t receive much notice in the press–but his one claim to fame was during a stunt for The Bright Lights (1916). Trade magazines carried the story:

Roscoe Arbuckle used Joe Bordeau as a human battering ram at the Keystone studio in Fort Lee, N.J., the other day, and Joe still lives, although he was driven like a wedge through a 12-inch wall with such force that a gap was opened large enough to admit the bulky ‘Fatty’ to a Bowery dive, where his country sweetheart, Mabel Normand, was held a prisoner…Joe says he’ll be at the Knickerbocker the first night to see how he survived an experience for which they use 42-centimeter shells in Champagne.

In his capacity as a veritable jack-of-all-trades, Bordeaux likely became an assistant director around this time too, as evidenced by a behind-the-scenes photo from the production of His Wife’s Mistake (1916): 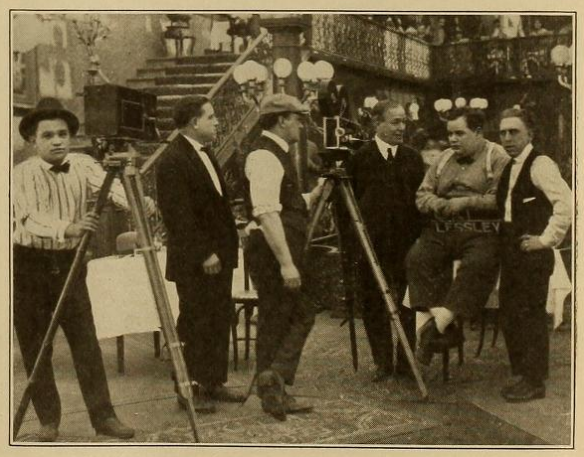 When Arbuckle left Sennett to star in his own comedy series, Bordeaux was one of the players that came along. He probably had no idea what history he was witnessing during the production of Arbuckle’s first short, The Butcher Boy (1917), with its famous appearance by Buster Keaton. Keaton nimbly supported Bordeaux and Al St. John in several scenes involving wacky hijinks and pratfalls–it was the perfect initiation.

Bordeau at the top, in the middle.

Keaton, Bordeaux, and St. John teamed up again for some amusing scenes in The Rough House (1917), where they played newly-recruited cops racing to the rescue with sergeant Bordeaux in the lead–clearly an homage to Keystone. It’s not hard to imagine both St. John and Bordeaux coaching Keaton in the finer details of playing a comic Kop. 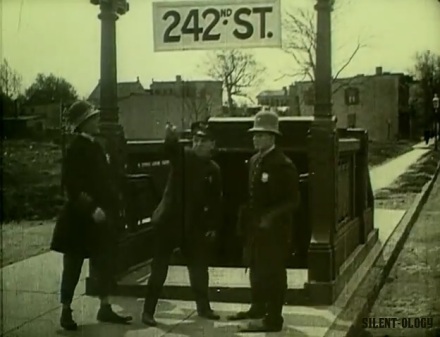 In 1918, Bordeaux left the Arbuckle team to work for King-Bee, where he was a bit player and an assistant director, and then slid over to Fox Sunshine. He made appearances alongside Oliver Hardy, Chaplin imitator Billy West, Larry Semon (who Bordeaux apparently doubled for now and then), and many more.

In the 1920s he would work for Hal Roach and Frank Capra and would also return to Sennett a couple times–loyal as many Sennett veterans were. By this point he was married to Madeline Searby, sister of fellow Keystone prop man William Searby, and happily loaned his baby daughter Jewell to the production of Ma and Pa (1922) (Jewell was their only child).

For the remainder of the silent era and well into the talkie era, Bordeaux continued playing bit parts in shorts and features (including Keaton’s MGM talkie Spite Marriage), doing property work, performing stunts and directing shorts. In 1933 he and several other Hollywood players such as Bobby Dunn and Spencer Bell formed “The Studio Chase Troupe,” an association of stunt men and special effects artists, a sort of one-stop shop for inquiring studios.

In 1935, a number of Keystone veterans were rounded up for the two-reel homage Keystone Hotel, featuring Ben Turpin, Ford Sterling, Chester Conklin, Hank Mann, and many more. Bordeaux played one of the familiar round-helmeted Kops, and doubtless had fun reliving the “good ol’ days” with his fellow players. 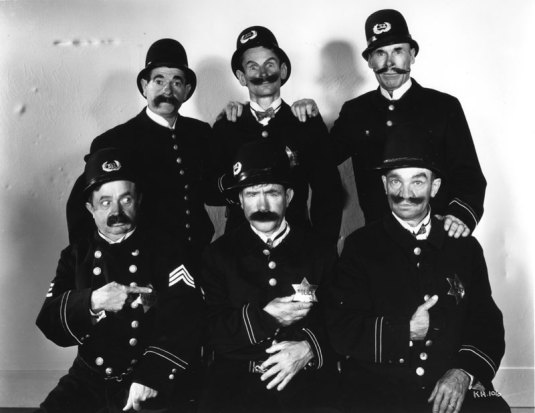 While much of Bordeaux’s work was either uncredited or behind the scenes, he always seems to have been busy, popping up in a Columbia short one day and a Warner Brothers feature the next. IMDb lists his final known credit as an extra in Chaplin’s The Great Dictator (1940), but I’m positive I saw him pop up in Frank Capra’s 1941 Meet John Doe as a customer at a lunch counter.

He slips into obscurity again until passing away at a hospital in September 1950 at age 64. Obituaries didn’t mention the cause of his death, although they did mention his time working for Sennett. He was survived by his wife Madeline and daughter Jewell, now Mrs. Jewell Fortin. 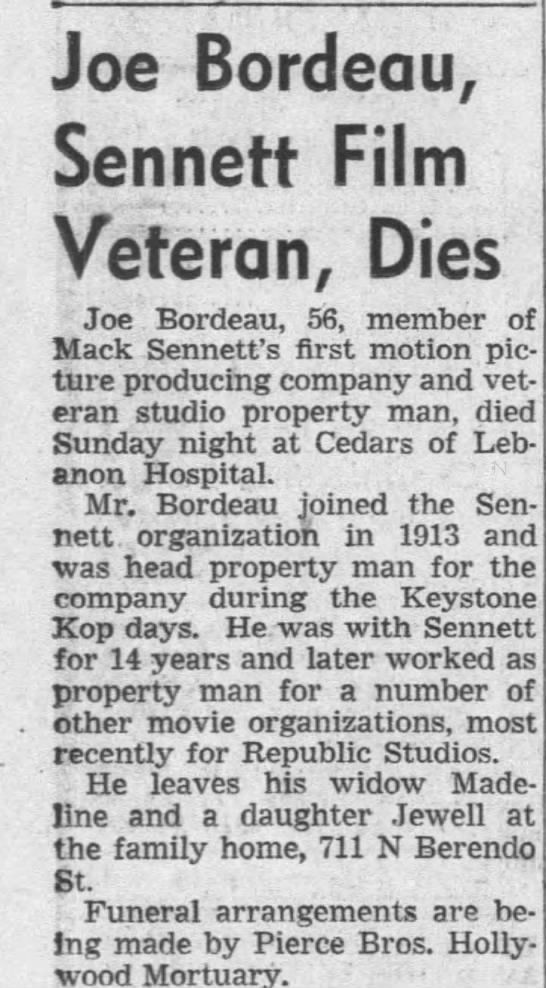 So why have I decided to research this bit player, Joe Bordeaux, who is such an obscure figure today, and who went uncredited for so much of his career? It’s not merely because of his track record of appearing with so many comedy greats, although this alone is remarkable. It’s because he was one of so many unsung players who spent years working steadily and tirelessly on our favorite films. They, along with the editors, set-building carpenters, folks in charge of wardrobe, etc., were the backbone of Hollywood–not visible like a dashing leading man or beautiful leading lady, but just as essential.

So here’s a little “thanks” for your contributions to cinema, Joe–and thanks to all the humble unsung, whether obscure or even entirely forgotten.

Kiesling, Barrett C. Talking Pictures: How They Are Made and How to Appreciate Them. London: E. & F.N. Spon, Ltd., 1937. https://archive.org/details/talkingpictures00barr/page/n5/mode/2up