The silent era boasted an incredible number of stars, from sweet ingenue types to “grotesque” comedians to dashing heroes. But not all stars were fashionable flappers or svelte sheiks–some were more on the…hairy side. Or even came on four legs. Yes, I’m talking about the animal stars–could you tell?–and there was a virtual zoo of them back in the day. 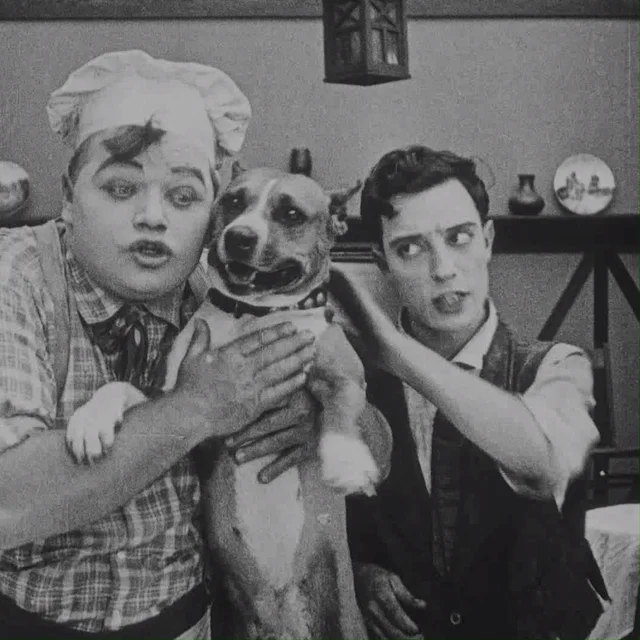 Performing animals were showing up on screen almost the second film was invented. An uber-early example is the British Kinetoscope short Performing Animals; or, Skipping Dogs (1895). Another tiny early film was The Boxing Kangaroo (1896), showing a trained kangaroo boxing with a small boy (truly, you never knew what you’d find in a Kinetoscope).

It wasn’t long before animals were helping popularize early motion pictures, too. One very successful early short was the charming Rescued by Rover (1905), another British work. Made by early directors Cecil Hepworth and Lewin Fitzhamon, it “starred” the Hepworth’s obedient family collie, Blair. The film showed Blair racing to rescue a kidnapped baby from a cruel beggar woman. It seems rather slowly paced today, but back then Rover was so popular that the original negatives kept wearing out and it had to be reshot two whole times. Thanks to this, Blair the collie has since been recognized as the very first animal star.

He would be followed by generations of furry and feathery performers. Jean the Vitagraph Dog, a black and white collie, got her “big break” in 1910. She proved to be such a well-trained performer that Vitagraph starred her in numerous light comedies and dramas such as Jean the Match-Maker (1910) and Jean Intervenes (1912). She also appeared alongside comedian John Bunny and Vitagraph’s biggest actress, Florence Turner.

The Thanhouser studio also had a collie named Shep. He worked from 1913 until 1915, when he passed away from an illness. Shep was similarly well-trained and it was said that directors rarely had to retake his scenes.

An early canine “hero” was the German shepherd Strongheart, owned by the same director who had trained Jean the Vitagraph Dog. Mostly forgotten today, he was the star of a number of adventure stories and helped popularize the German shepherd breed in the U.S. He was soon rivalled by the most popular canine star of them all, Rin Tin Tin, declared by Variety to be “the Fairbanks, Mix, and Barrymore of the canine world”. Discovered as a puppy in a bombed-out kennel in France during World War I, Rin Tin Tin would compete at dog shows and eventually be put into the movies. His film Where the North Begins (1923) likely saved the Warner Bros. studio from bankruptcy. 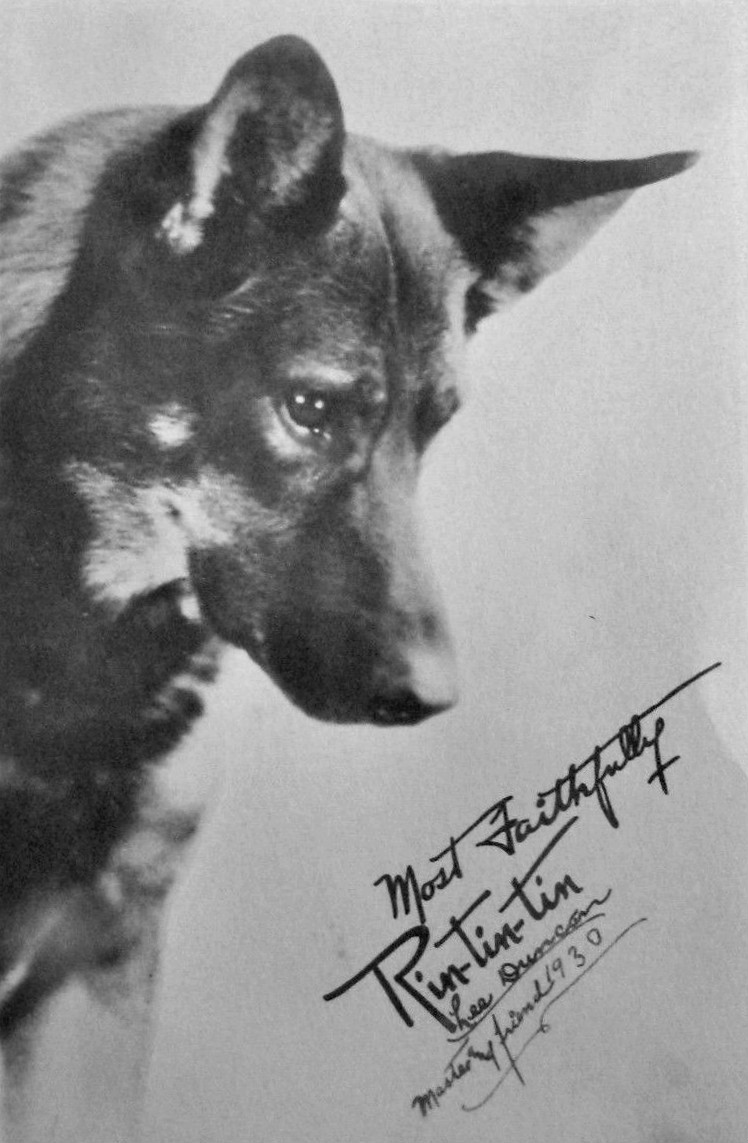 On the silent comedy side, there was a plethora of charming trained animals. Little Brownie the Wonder Dog would co-star with Baby Peggy in the early 1920s. The Keystone Film Company was lucky enough to have Roscoe “Fatty” Arbuckle’s dog Luke, a fearless Staffordshire bull terrier who loved chase scenes, could climb ladders and could even jump from one rooftop to another. Luke showed up in a number of 1910s Keystones (often chasing Al St. John) and also appeared much of Arbuckle’s subsequent Comique series. He also made a cameo in Buster Keaton’s farm-themed short The Scarecrow (1920).

The most famous Keystone canine was the gentle giant Teddy, a Great Dane who appeared in dozens of shorts between 1915 and 1924. He also had parts in films like Mary Pickford’s Stella Maris (1918). Called “Keystone Teddy” or “Teddy the Wonder Dog,” he’s said to have been paid $350 a week.

Not to be outdone by mere performing dogs, in the 1920s Fox had a trio of performing monkeys named Max, Moritz and Pep. They were dubbed, appropriately enough, the Fox Monkeys and their human costars included Jean Arthur and Jack Duffy. One talented little Capuchin monkey was named Josephine, who had a remarkably expressive face. She’s probably the most famous for appearing alongside Buster Keaton in The Cameraman (1928).

The chimpanzees Napoleon & Sally were a mid-1910s comedy duo who were featured in one-reel shorts. They were usually dressed in little outfits and mimicked housekeeping and other human-like behavior. Their offspring was a female named Snookums, who would also go on to perform in comedies. Billed as a male called Snooky the Humanzee, she was talented enough to star in her own 1920s series. (Yes, even chimpanzees performed in drag in the silent comedy days!)

Century Comedies was practically a zoo by itself, boasting not only the orangutan couple Mr. & Mrs. Joe Martin, but Queenie the horse, Charlie the elephant, the dogs Brownie and Pal, and even some trained lions (known simply as the “Century Lions”). Lions being tussled with or popping up at inopportune times were big trends in silent comedy, and Century was happy to deliver with a whole slew of films like Daring Lions and Dizzy Lovers (1919) and Lion Paws and Lady Fingers (1920). 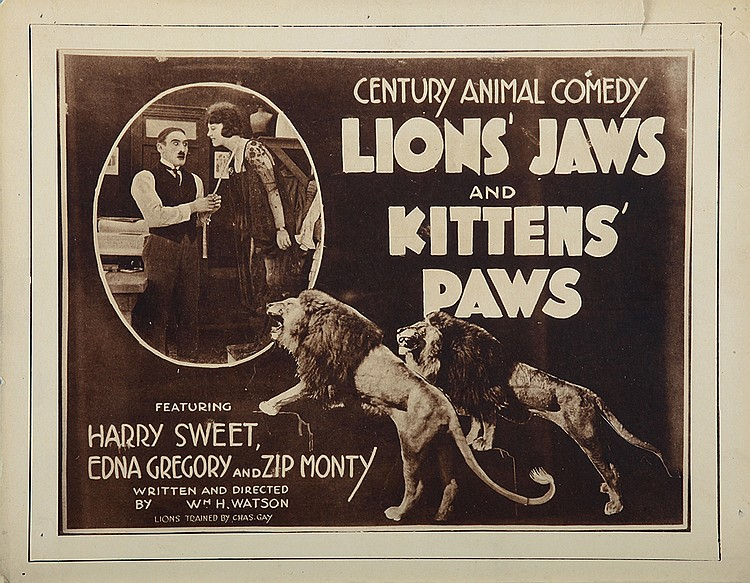 Along with Teddy the Wonder Dog, Mack Sennett also had Pepper, a dark gray cat who was said to have been born underneath a Keystone soundstage. She showed up in shorts like The Kitchen Lady (1918) and Bow Wow (1922), both starring Louise Fazenda (who had an affinity for animals). Waddles the Duck also had his heyday on the Sennett lot, and eventually “retired” to spend his remaining days in Fazenda’s backyard. Anna May the Elephant showed up in several shorts, such as Remember When (1925) starring Harry Langdon. And thanks to another odd silent comedy trend of having random bears wander into the action, Bruno the Bear and Cubby the Bear were also regular furry faces in Sennett’s comedies.

There were also some well-known equestrian stars. Rex, a frankly ferocious Morgan stallion, was a star in adventure serials throughout the 1920s and kept kicking and galloping throughout the 1930s, too–despite many actors being nervous to work with him. And Tom Mix’s trusty “wonder horse” Tony was a familiar sight to many fans of westerns.

Perhaps the most surreal use of animal stars in the silent era was Hal Roach’s short-lived series the Dippy-Doo-Dad Comedies. Often set in rural or western locations, the stories were pretty straightforward but with the bizarre twist of an all-animal cast–in little outfits, too. Acted by trained dogs, ducks, monkeys (including little Josephine), and so on, the series was silent comedy’s take on an alternative universe.

With the love of cute, funny, and talented animals being just as strong back in the early 20th century as it is today, it’s not surprising that directors used them to jazz up so many films. (Admittedly, it probably helped that animal stars couldn’t complain about their salaries.) When we look back on the legacy of cinema, let’s not forget to appreciate the hard work of so many men, women…and four-legged friends.

This post is a version of an article I wrote for my Classic Movie Hub column Silents are Golden. It was fun to revisit!

Steve Massa’s book Lame Brains & Lunatics: The Good, the Bad, and the Forgotten of Silent Comedy was very helpful for this article, as was the book chapter “The Dogs Who Saved Hollywood: Strongheart and Rin Tin Tin” by Kathryn Fuller-Seely and Jeremy Groskopf, excerpted from the 2014 book Cinematic Canines (the chapter can be read here).