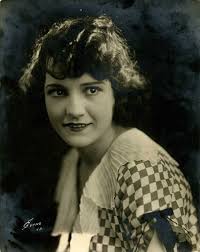 Sibyl Travilla Furthman was born on January 2, 1900 in Los Angeles. Her father was Harry Travilla (who died sometime in 1905) and her mother was Lucie Ellen Boyker. She had several siblings: Guy, Jack, Ford, Edith, Elaine, and Connie. Her three brothers had been in the entertainment business as The Travilla Brothers, a popular vaudeville act that featured stunt diving and swimming in an on-stage tank. At age 17 Sybil joined the Keystone Film Company as an extra, her first role being a bit part in Her Nature Dance (1917). She continued to play bit parts in Keystone comedies (later Mack Sennett Comedies) over the next few years, often appearing as one of the famous Bathing Beauties. When given screen credit she was listed under the name “Sibye Travilla.” In 1920 she was hired by Buster Keaton to be his leading lady in his short One Week (1920), and it’s probable that this is when she adopted the name Sybil Seely (“Sibye Travilla“ would still show up as a screen name in her few subsequent non-Keaton film roles). She then starred in Keaton’s The Scarecrow and Convict 13 (both 1920). She also married Jules Furthman in 1920; he would become known for his screenwriting on famous films such as Mutiny on the Bounty (1935), and The Big Sleep (1946). The couple were happily married and in 1921 had their only child, Jules Jr. While pregnant with Jules Jr. Sybil took a break from film work, but was eventually brought back by Keaton for his shorts The Boat (1921) and The Frozen North (1922). She also appeared in comedies for Fox. She retired from films to raise her son and devote herself to being a homemaker. Sybil Seely had played roles in 21 films on record, and is remembered for her sweet, fresh performances in Keaton‘s films. She died June 26, 1984, in Culver City, California.

My research for an article in the spring 2015 Keaton Chronicle, which included: