While earnestly piecing together my next post, I ran across this bit of Edwardian awesomeness that could not go unshared. It’s especially amusing if you like silent era in-jokes:

END_OF_DOCUMENT_TOKEN_TO_BE_REPLACED

While combing through an online copy of a 1920s magazine just for amateur movie makers (it’s called, in case you’re curious, Amateur Movie Makers) I stumbled across a name that seemed familiar: “Norman McLeod”. Hmm, why did that ring a bell?

He was mentioned in an article on “art titles” (title cards with illustrations) which referred to “the famous skeleton cartoons” which “were made familiar by the clever pen of Norman McLeod, who has illustrated Christie Comedy titles for a number of years.” (You might be picturing Silly Symphony-style skeletons, but they were actually stick figures.) Having seen a few of the Christie Comedies, I had a little “ah-ha!” moment of now knowing who was behind those funny cartoons. 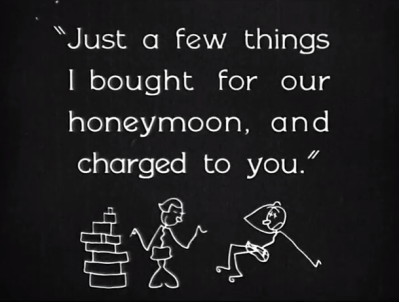