In 1914, horror wasn’t a recognized movie genre. Yes, there were films with macabre elements (like those strange, ancient special effects excursions by de Chomon and Melies), and you had your usual dark mysteries and thrillers (often in serial form). But the idea of being an enthusiast of “horror films” wouldn’t enter the public lexicon for quite a few years.

So in order to find the ancestors of Frankenstein, (1931) and The Haunting (1963), we have to weigh our options. The 1910 Frankenstein certainly counts, yes? And something like The Cabinet of Dr. Caligari (1920) does, obviously. What about the serial Les Vampires (1915), with that one famous still? Or something off the beaten track, like Charley Bowers’s surreal short There It is (1926) or Max Linder’s Au Secours! (1924)?

One film that’s an obvious candidate is The Avenging Conscience, or Thou Shalt Not Kill (1914), D.W. Griffith’s Poe-infused drama containing visions of leaping demons and fake skeletons. I know I prefer watching it around Halloween.

END_OF_DOCUMENT_TOKEN_TO_BE_REPLACED END_OF_DOCUMENT_TOKEN_TO_BE_REPLACED

In true Silent-ology style, I decided to focus on my top 5 utmost favorites from the silent era, rather than film in general. So let’s count down to number 1: END_OF_DOCUMENT_TOKEN_TO_BE_REPLACED

In our minds, we picture Intolerance differently than most films. Say the title, and we usually don’t see the faces of the Dear One or Brown Eyes or run shots from the four storylines through our minds. We picture the photo of the massive hall of Babylon. We see the sharp-edged archways, the curves and ridges of the immense pillars, the  white elephants with their peculiarly defined muscles and curving trunks. We also see the masses of tiny people on the floor of the hall, clustering around the feet of the elephants, and lining the top of the archways. There is an awed sensation when you think of this dense image. Perhaps there is also a sense of remoteness.

But recall the actual scene itself, how the camera slowly, smoothly moves forward, closer and closer until we can clearly see the people, see the details of their clothes, and can see their faces in their matte makeup.

END_OF_DOCUMENT_TOKEN_TO_BE_REPLACED

D.W. Griffith’s massive, dramatic, beautiful 1916 epic Intolerance, to this day one of the most ambitious film projects ever devised, is a century old today. On September 5, 1916 its world premiere was held at the Liberty Theater in New York. This is arguably one of the biggest milestones in cinematic history. It’s partyin’ time. 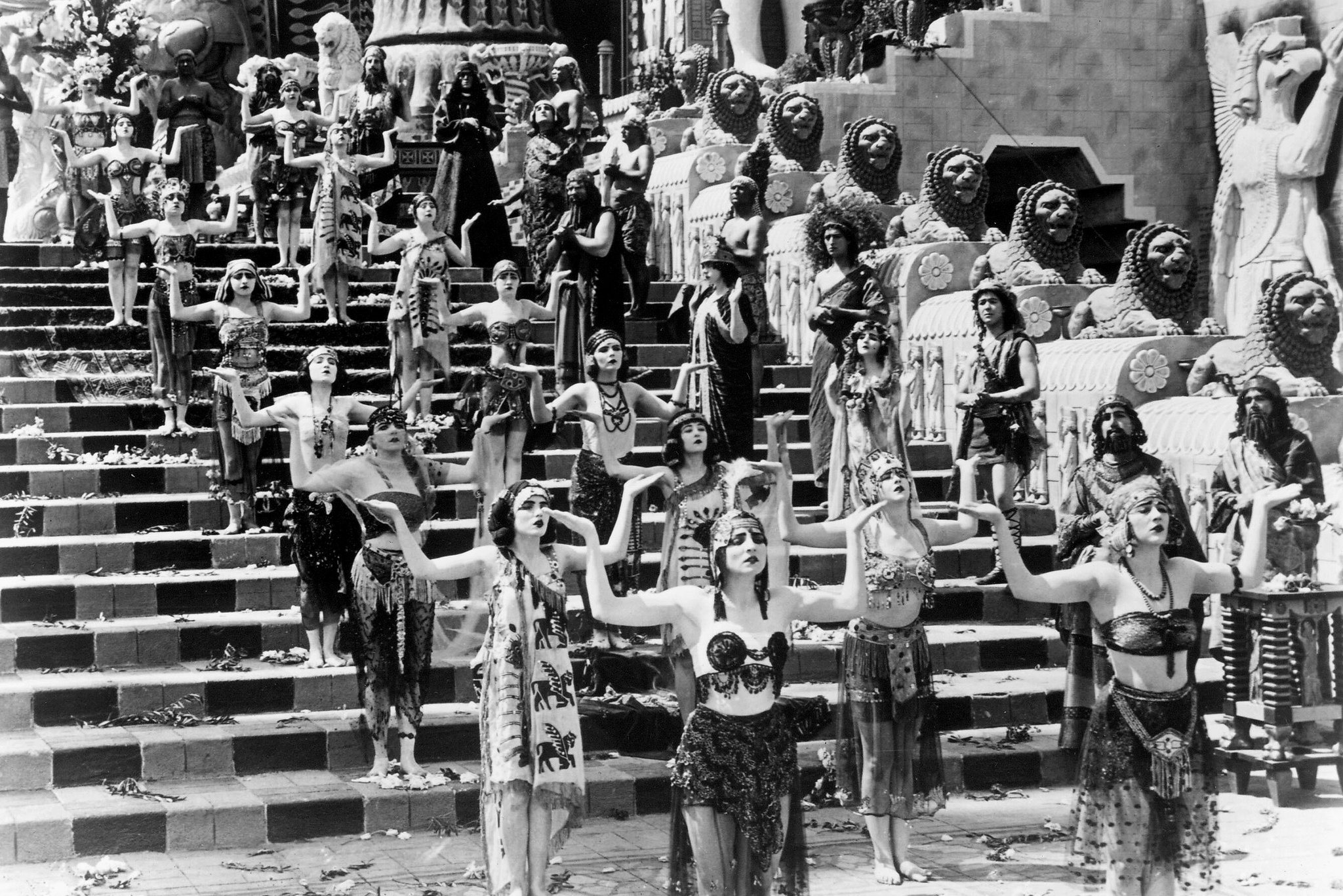 In 1958 Buster Keaton (who parodied the film in The Three Ages) reminisced: “Griffith’s Intolerance was] terrific…It’s a beautiful production. That was somethin’ to watch then. You weren’t used to seein’ big spectaculars like that.”

I’ll be devoting some posts to this cinematic masterpiece later this month, so until then, have a celebratory banner.

I am pleased to present this article on the life and career of the very underappreciated Bobby Harron, an actor of rare talent who left his mark on some of the greatest films of the silent era–and the film industry in general. It’s a long one, so I’ve added a list of contents for your convenience! 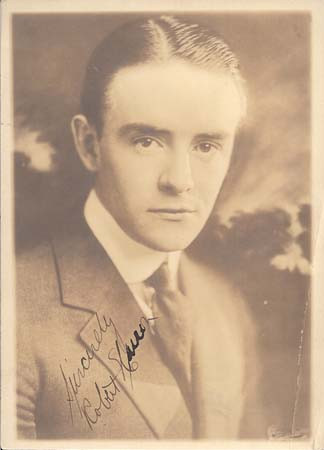 One of the earliest and most overlooked film stars is Robert “Bobby” Harron. The slender, unassuming young man acted in dozens of films, including the largest milestones of all time: The Birth of a Nation (1915) and Intolerance (1916).

And yet, perhaps because of the attention given to Griffith’s actresses, Bobby is constantly, and consistently, overlooked. It’s common to see articles merely mention him as a costar to Mae Marsh or Lillian Gish before delving into the details of the women’s performances. Gish and Marsh were some of the finest actresses of the silent era, to say nothing of other talented Griffith players like Miriam Cooper or Blanche Sweet. But Bobby was a massively talented actor in his own right. Take a moment to turn your concentration from Gish or Marsh to the dark-haired Irish lad just to their side, and you’ll realize what you’ve been missing. END_OF_DOCUMENT_TOKEN_TO_BE_REPLACED

This is my World War I in Classic Film Blogathon post, complete with SPOILERS. There’s lot of awesome posts to read here at Silent-ology today, and there will be more over at Movies Silently tomorrow.  Thanks for reading! 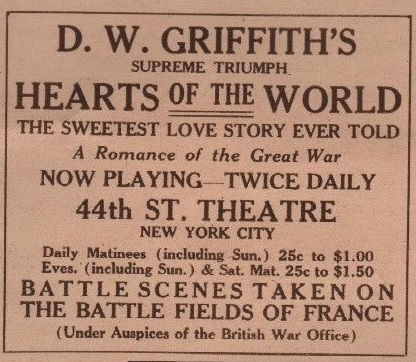 By 1917, World War I had been raging for nearly three years.  Europe was reeling from the ever-increasing death tolls and relentless destruction of cities, villages, and farmlands in France and Belgium.  The scale of the war, involving all the nations with the most economic power at the time, truly deserved the phrase “unlike anything the world had ever seen.”

The U.S. had managed to stay neutral throughout most of the conflict, which was starting the leave the more battered European nations at their wits’ end.  At some point in the winter of 1916 and 1917, the British War Office Cinematograph Committee decided to contact the one person who they felt could change the minds and emotions of the American people…none other than D.W. Griffith, who had recently completed Intolerance. Propaganda films were common at the time, and the Committee reasoned that Griffith, King of Filmmakers, would be certain to turn out an excellent propaganda film that would inspire Americans to finally join in to help defeat Germany. END_OF_DOCUMENT_TOKEN_TO_BE_REPLACED

There is a collective dream of the era we like to describe as Victorian. It is composed of brownish lace, top hats, dusty wrought iron and soft-edged photos of remote, elegant people. It’s that feeling we have when we come across something surprisingly delicate and worn in an antique shop. It’s the way the term “Victorian” itself suggests good posture, engravings, and heavy drapery.

Within that collective dream, occasionally there would come a gem like True Heart Susie (1919). This is a film not only made from dreams, and not only nostalgic memories of the “olden days”, but polished snippets of a time that was still alive and well. The year it was made World War I had just ended, the Model T was still the butt of countless jokes, and only 2% of American farms had electricity.

END_OF_DOCUMENT_TOKEN_TO_BE_REPLACED

He’s one of my favorite actors…not just from the silent era, but overall.  Indeed, I think there’s an argument to be had that his talent is just as brilliant today as it was in the ’10s.