This is my own post in honor of the Silent Movie Day Blogathon. Hope you enjoy!

When it comes to talking about great movies (in the Roger Ebert sense of the word), I’ve always loved making and sharing lists: top tens, top fives, your “essential threes”–they always seems to prompt interesting discussions. Face it, you’re asked to list what you think are the Top 10 Best Movies Ever Made and it’s hard to resist, isn’t it? Even the top film critics and directors in the world famously contribute to Sight & Sound‘s “Top 10 Greatest Films” lists once every decade. It’s enlightening to see how certain films will fall a bit out of favor while others remain universally praised–often for generations.

But your average carefully-compiled lists, hard as they can be to put together, are one thing. Trickiest of all is picking a single “greatest of the great” film from a given genre or era (putting aside the immense difficulty of choosing “The Greatest Film, Period”–phew!). So with that in mind, and since no one asked me, I thought I’d ponder: “What is the greatest silent film?”

END_OF_DOCUMENT_TOKEN_TO_BE_REPLACED

The day of the “show” came. The courts adjourned. Stores closed, the blacksmith dropped his tongs, and school “let out” at noon. The people went in droves, even the ministers and their wives…The opera house was packed, with an eager, expectant and mystified audience. The house was darkened, and suddenly a glimmering light began to play on a canvas dropped like a curtain across the stage. And the first moving scene “thrown” was one of a lazy policeman trying to hurry an old man and a crippled mare across a street. The town wag let out a whoop, everybody caught the spirit–the moving pictures were a go!

Could cinema have been invented at a more fortunate time? Once an impressive novelty viewed for a few cents a pop, it also inadvertently documented intriguing glimpses of the “old,” traditional way of life. And those glimpses were something more than the general, exciting changeover from horse-drawn buggies to automobiles, or how the cities slowly lit up with electric lights. It was the passing of using those horses to plow fields, the end of drawing water by hand from a well, the dwindling away of kerosene lamps and flickering candles. It all happened in the mere span of a generation or two.

END_OF_DOCUMENT_TOKEN_TO_BE_REPLACED

You run into it time and time again when reading about film history: “German Expressionism, German Expressionism.” It pops up even more than “French New Wave,” another term that tends to make people’s eyes glaze over. Silent newbies and casual fans probably wonder: just what exactly was this movement that all the film historians go nuts for?

To answer that, we have to glance through a little art history, learn a bit of theater history, reflect on WWI and Germany, and get acquainted with how “the ghosts which haunted the German Romantics had revived, like the shades of Hades after draughts of blood.”

Or something like that. Bear with me, for there’s a lot of pieces to put together to get a good picture of German Expressionism. END_OF_DOCUMENT_TOKEN_TO_BE_REPLACED 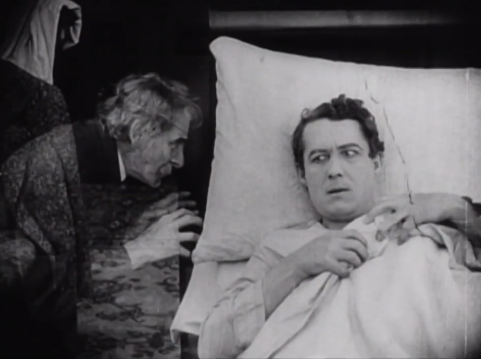