When digging through film history you come across a lot of intriguing “what ifs”–what if a film had starred a different famous actor?  What if a director had been able to made a certain dream project come true?  What if the plans for a big cinematic extravaganza hadn’t fallen through?

Of course, the coolest “what-ifs” involve our favorite stars.  One that I find intriguing concerns a feature-length film that Buster Keaton came very close to making back in the mid-twenties…a potential film with the working title of Skyscraper.

In the spring of 1925, not long after the release of Seven Chances, this announcement was printed in Variety:

Sherwood (as in Robert E., and not Sherwood Schwartz, who keeps popping into my head as I write thanks to my childhood watching Gilligan’s Island) was a film critic who was so respected and well-liked that stars and directors invited him to Hollywood.  During the ’20s he worked for Vanity Fair and the “old” Life magazine (when it was a weekly publication focusing on humor and general interest rather than photojournalism) and he also wrote both plays and screenplays.  He was also known for being six feet and eight inches tall.

As seen here trying to fold himself into an ordinary chair.

Working with the renowned Sherwood was a smart move on Keaton’s part.  It also helped that Sherwood was one of Keaton’s biggest fans–and very early on too.  In fact, when The Saphead was released in 1920, in his review of the film he stated:

It is just as well that Charlie Chaplin did not wait any longer before releasing The Kid, for otherwise he might have awakened one bright morning to find that his crown had passed to the pensive brow of Buster Keaton.

Reading what Sherwood’s story was going to be is a thrill, for if you know Keaton’s work well you can picture the film unwinding ever-so-faintly in your mind.  You can almost see the Keatonesque flourishes it would’ve had.

As mainly relayed in Keaton’s autobiography My Wonderful World of Slapstick, here is the story.  Sit back and imagine this “what-if” movie:

It’s wintertime in the big city, and Keaton is a worker on a new 60-story skyscraper that’s under construction.  He’s the humble elevator operator that carries all the steelworkers, bricklayers, etc. up and down from the building throughout the day.

He has a crush on the daughter of the building’s architect.  One day, she comes to see her father’s work-in-progress.  Shyly, Keaton offers to take her to the top of the building to see the spectacular view.  She accepts.

But while they’re up there, unbeknownst to them a workman’s strike is called.  Every single steelworker, bricklayer, etc. promptly leaves the building–and one of them shuts off the electricity.  Keaton and the girl are blissfully unaware of their situation.  Eventually, they get in the elevator again to descend–and discover that it’s not working.

Nothing they do will make the elevator work again.  It begins to grow dark, and they are trapped in the open air among all the steel beams and girders.  No water, no food–only a few crumbs in Keaton’s lunch pail.  They wave frantically at the people they see in nearby buildings, but the people misunderstand and simply wave back cheerfully.  Keaton uses the girl’s lipstick to write a note asking for help, and they watch as it drifts down, down, almost but not quite into an open window, and finally onto the ground where a man picks it up, takes it for a joke, and throws it away with a shrug.

Days pass, and the two have started to adapt to their desperate situation.  They make a shelter out of spare sheet metal fastened together with nuts and bolts.  They figure out a way to catch rain water.  They even make a trap for pigeons and sea gulls using those sad little lunch pail crumbs as bait.

Then, at last comes the day when… 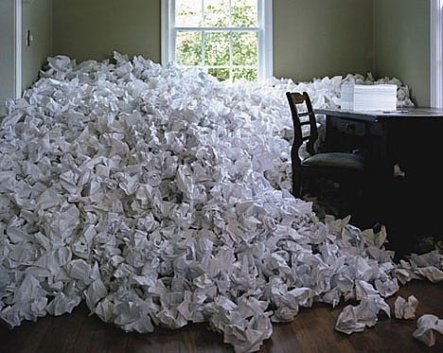 Yes, neither Sherwood, nor Keaton’s team, nor Keaton himself could come up with a cool enough way to get that couple down from the building.  The characters couldn’t just climb down–aside from being nearly impossible to do on something of that size, how dull would that be?  And they couldn’t just have a blimp come get them either–too easy, and the audience would be disappointed that Keaton’s character didn’t figure out a clever way to save the day himself.

So Sherwood returned to New York and Keaton returned to work, Skyscraper existing only as a memory of an idea.  And how Skyscraper might have changed the Keaton filmography is something we can never know.

The plotline is remarkably similar to The Navigator, and since the latter was Keaton’s most financially successful film maybe they thought that they had stumbled upon the winning formula.  The film itself would’ve inevitably reminded viewers of Harold Lloyd’s Safety Last (1924).  In fact, I’m even willing to bet that it occurred to you while you were reading this.  Had Skyscraper been made, I’m willing to bet that critics back then would’ve pointed out the “obvious Lloyd similarities” and that film historians today would’ve referred to it as “a thrill comedy in the vein of Harold Lloyd” or “Keaton’s take on a Harold Lloyd-style film”.  The Lloyd vs. Keaton comparisons would’ve been off the charts.

And I’m willing to bet Laurel and Hardy’s silent short Liberty (1927) would be seen as an imitation or homage of the Keaton film!

One wonders just how many stunts Keaton would’ve staged high in the air.  For of course due to his love of “doing things for real” he would have to actually be somewhere up high–maybe not technically 60 stories high, but a good distance off the ground.  Many gags would’ve no doubt played with a mathematical use of moving beams, teetering wooden boards, and pulley systems.  (Doubtless there would be many examples of Walter Kerr’s “Keaton Curve” as well.)  And the clean lines of beams and wooden platforms would’ve created lots of opportunities for Keaton’s Signature Shot, as I shall dub it.

What is Buster Keaton’s Signature Shot?

This is a motionless, eye-level shot that often shows up in Keaton’s films, facing directly at the scene of the action rather than at an angle.  The composition is very balanced and uncluttered, with clean lines.  The effect can be startlingly modern.

Here’s a Signature Shot from The Goat: 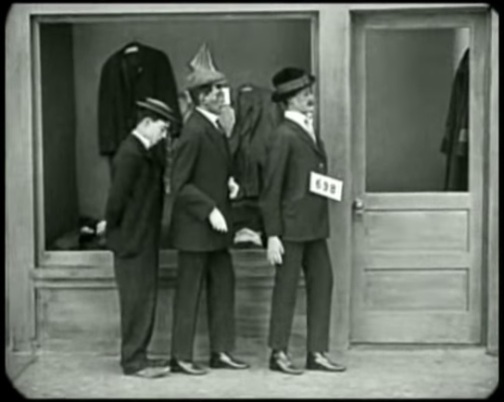 Another one from The Goat (note the perfect, minimalist composition of the windows and the contrasts of the types of the brick).

A magnificent example from Day Dreams (many of these shots would work as art stills, this one particularly so):

Large scale use of it in The General: 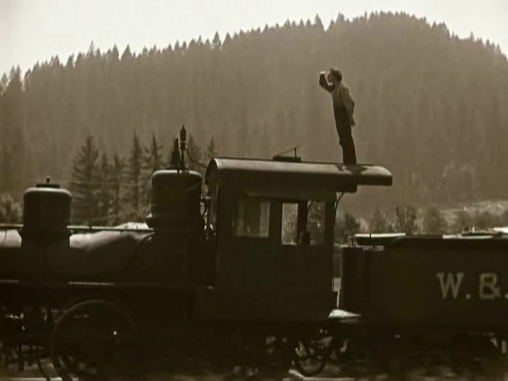 If a Keaton Signature Shot were broken down just to essential lines, it would be a Piet Mondrian painting.

Which film would Skyscraper have possibly replaced?  Go West, the film that followed Seven Chances?   What about Battling Butler?  And would the idea for The General have occurred when it did?  Maybe some things are simply meant to be…and Skyscraper, as beautifully intriguing as it might be, simply wasn’t.

Sherwood also lucked out an another potential collaboration.  As soon as Sydney Chaplin heard that Sherwood was writing a story for Keaton (news really traveled in Hollywoodland), he sent his famous brother Charlie this telegram:

SHERWOOD OF LIFE WRITTEN MOVIE STORY CALLED SKYSCRAPER FOR BUSTER KEATON STOP KEATON CONSIDERS STORY GOOD BUT HAS NOT AS YET DEFINITELY PURCHASED IT STOP HAVE READ IT AND THINK IT OKAY SHERWOOD WRITING ANOTHER ONE SUITABLE FOR YOU STOP WIRE ME IF YOU WANT ME TO TRY AND CLOSE THE DEAL FOR YOU.

Apparently Chaplin wasn’t interested in closing the deal, as nothing came of this idea either.

Sherwood would go on to write many successful screenplays, eventually quitting film criticism in order to devote himself to it more fully.  He also wrote plays, and in his spare time got around to writing speeches for President Franklin D. Roosevelt.

But he never forgot the story for Keaton that he had left unfinished.  In 1940 Keaton was hanging out in the lobby of the Dorchester Hotel in London.  Sherwood came in and saw him, but didn’t stop.  As he walked casually past Keaton, out of the corner of his mouth he whispered, “Stop worrying, Buster, I’ll get you down off that building yet!”