Typically, there’s a mere handful of Mary Pickford films that get discussed regularly, Stella Maris (1918), Sparrows (1926,) and Daddy-Long-Legs (1919) usually reaching the top of the list. But happily for us, Pickford was one of the hardest working women in Hollywoodland and left behind a generous filmography to explore. Seek and you shall find a number of gems–such as the quirky light comedy The Hoodlum (1919).

Pickford plays Amy, the spoiled rotten granddaughter of a wealthy businessman. Her grandfather wants to take her abroad, but she suddenly decides she’d rather be with her father, a sociologist who’s studying life in the slums of New York. Since he’s writing a book about the slums, he takes Amy from her usual servants-and-silver life on Fifth Avenue to stay with him in the crowded, claustrophobic inner city tenements. 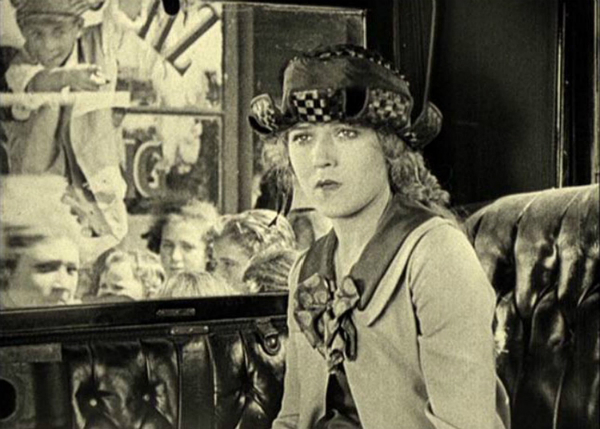 Amy’s shocked by conditions there at first (she imagines herself sitting forlornly in a pigsty surrounded by hogs). She’s snooty to the friendly neighbor girls and downright bratty toward the cook. But her father advises her to be more open minded: “Treat them as your equals–become one of them…”

Inspired, she decides to adapt wholeheartedly to slum life, transforming herself into a  the “hoodlum” of the title. She pals around with a small gang of children, shooting craps and using slangy lingo with the best of them. (Count me as curious about her distinctive “hoodlum” outfit of striped dress, big-beaded necklace and flamboyant little hat!)  When her grandfather hears what his precious girl is up to, he’s outraged and decides to head to the slums in disguise to witness the spectacle for himself. Yes, the plot is strange. But what does it matter, so long as it stars Pickford? Always delightful, she gives her fans a little bit of everything in this film. We see her both elegantly dressed and in eclectic street clothes, throwing tantrums and having tender moments, doing slapstick and witnessing scenes of almost unbearable sadness. The Hoodlum is a light comedy, but it has pathos that Pickford can carry off with complete sincerity. It isn’t subtle, but you don’t feel that she’s trying too hard. It works. Maybe it’s because we sense that she respects her audience.

She respects the subjects in her films, too. Describing the plot makes it sound almost insulting–a rich girl “going slumming?” Trying to talk with street lingo? Really? But the spirit of The Hoodlum is very different. Pickford was a champion of the poor, having experienced it as a child when her family was constantly on the road. The overwhelming but good-natured Irish, Jewish, Italian, etc. residents of the slum are in clear contrast to Amy, who starts out unable to see her new neighbors as anything but dirty and ill-mannered. When a couple of girls offer to become friends, she responds with a sniff: “I am utterly fatigued. You will oblige me by leaving.”  Amy has to allow herself to soften before she’s able to appreciate her neighbors for who they are.

You could say that The Hoodlum is basically setup for Pickford to play one of the tomboyish little toughs she was famous for. And you’d totally be right…to a point. Pickford was clearly very concerned about artistry and producing an authentic-looking world for her “hoodlum” to run around in. The “New York slums” were entirely Hollywood sets, crafted with amazing detail. (I wonder which set designer spent time crafting just the right kind of debris to litter the streets, and if he went out and studied street litter for inspiration!) In keeping with most Pickford films, the lighting is perfection, especially in the night scenes where Amy is trying to find refuge from the pouring rain.

The set with Mary at the top right and a pianist adding mood music on ground level, Photoplay, 1919.

And there’s realism that would make Eric von Stroheim envious in the scenes where Amy’s faced with the worst miseries of poverty. We see an alcoholic sleeping it off in a filthy room full of rags and debris, and a family of neglected children whose mother is too ill to leave her bed–we even see cockroaches crawling on the poor woman’s pillow. We see the poverty, but then we also see Amy treat the impoverished with dignity, and doing what she can to help them. She explains to her grandfather: “I’ve seen things that have opened my eyes.”

I’ve seen a couple fan reviews remark that the title could turn viewers off, “hoodlum” not being as popular nowadays as “thug” you see. Well, that sure doesn’t apply to me–the more old-timey an old film’s title is, the more I want to watch it. Give it a title like The Ragamuffin or A Gentleman’s Dilemma and I’m all over it. Something like Poor Orphan Opaline’s Consumption would make me drop everything. In any case, the idea of something sounding too old-timey to attract interest is not something that my mind can comprehend. (Oh, and by the way, The Hoodlum begins with a mini public service film where Mary urges people to continue buying WWI war bonds!)

If you’d like to see this underappreciated little gem, The Hoodlum is available in your usual cheap knockoff DVDs and fuzzy YouTube copies, but it’s also part of Milestone’s Rags & Riches: The Mary Pickford Collection. It’s also available for streaming on Fandor.

13 thoughts on “Obscure Films: “The Hoodlum””