The day has come, folks. Having been on a bit of a Larry Semon kick lately, the time feels right to investigate one of the most infamous comedies ever made. It wouldn’t be too much of an exaggeration to call it one of the most derided flicks of all time–Semon’s 1925 feature The Wizard of Oz.

My fellow blogger nitrateglow described it as the Phantom Menace of the silent era, and oh boy is that true (right down to the dull political talk in place of fun! It’s uncanny). Nevertheless, I went into it with an open mind, determined to judge it for myself. Was it really as bad as everyone said? Are the choices it made really that baffling?

Well…yes and no. The Wizard of Oz isn’t a great film. But as far as the choices it makes, there just might be a little more reasoning behind them than we’d expect.

So far, so familiar.

When you watch it, the first mental hurdle is trying to clear the iconic Judy Garland version–released fourteen years after Semon’s–from your mind. Easier said than done, especially if you were once a kid like me who watched it so many times that it’s surprising the Technicolor didn’t burn itself into my retinas. 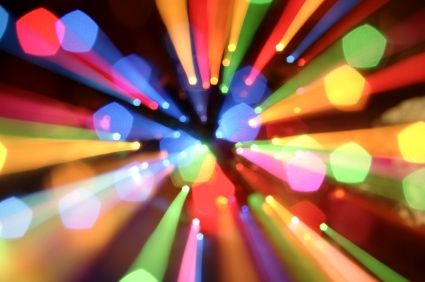 Once that hurdle is past, you crash headfirst into the next one–the plot. If you were a kid like me who not only memorized the 1939 film but also read all the Oz books, well…it has issues. Here’s a summary:

The film opens with a trope that’s very familiar to us today, characters reading from a book. Semon, nicely convincing as an elderly toymaker, starts reading L. Frank Baum’s The Wizard of Oz to his granddaughter. This magical fairyland of Oz, he reads, is being ruled by an assortment of bad puns: Prime Minister Kruel, Ambassador Wikked, Lady Vishuss, and their huckster assistant, the Wizard (played by Charlie Murray, in one of the most brilliant casting decisions ever. Seriously, he’s perfect. If only he had more screen time…!). The people, lead by Prince Kynd (arrrgh) are demanding the return of their princess, who was kidnapped as a baby many years ago. The Prime Minister is displeased by this.

Gee, I recognized the marvelous land of Oz in a heartbeat!

In the meantime, Larry is one of three farmhands on the Kansas farm owned by Uncle Henry (Frank Alexander) and Aunt Em (Mary Karr). The other hands are played by Oliver Hardy and Spencer Bell–a black actor whose character is named, err, Snowball. Aunt Em is your typical sweet elderly lady while Uncle Henry is a blustering bully. Little Dorothy is portrayed as an eighteen-year-old by Dorothy Dwan, probably in an attempt to add a bit of a Jazz baby update. Both Larry and Ollie vie clumsily for her hand.

And yup, Dorothy’s the Oz princess, whose infant self was apparently dumped on the doorstep of a random farm in Kansas. When Aunt Em is about to reveal to Dorothy her true heritage, Wikked and his, err, soldiers show up and scuffles ensue.

The Kansas scenes are full of your typical Larry Semon slapstick, involving chickens, people flying off swings, and barrels of goo. And they go on for awhile. Quite awhile. At least half of this hour-plus movie, in fact. Semon was doubtless wanting to tailor the story to his style of broad gag-driven comedy, which in my view isn’t necessarily a problem, but you start to wonder when the heck they’re going to actually get to Oz.

Hint: Not till after much more of this.

To our relief the tornado finally strikes (with some nice special effects) and our principle characters are blown away to Oz…where the farmhands disguise themselves as a scarecrow, tin man and lion to escape the soldiers. (Prime ministers, politics, prosaic explanations for magical elements…it is The Phantom Menace!) Kruel tries to marry Dorothy by force and Prince Kynd and the farmhands come to the rescue, aided by the Wizard. Will everything end happily? Will Larry figure out how to work in more goo?!

So you’re already seeing all the flaws in this film, from the flat characters to their head-scratching motivations. Most annoying of all, the story is next to nothing like the book. Semon made sure to literally take out everything magical about Oz–there are no witches, no fantastical creatures, and Oliver Hardy’s Tin Man ends up as a villain, for cripes’ sake. The question is: why? Why remove the most fun aspects of Baum’s classic tale? 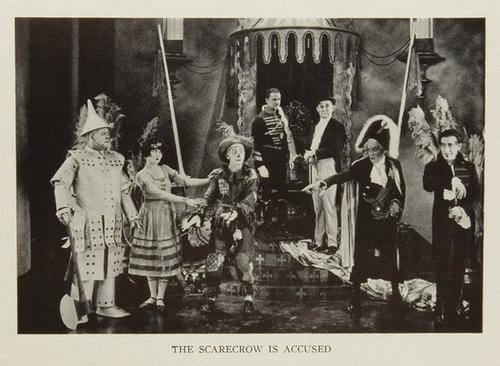 And why did filmmakers like George Lucas not learn from the past?

Maybe it’s partly because Semon didn’t really “do” magic. Unlike some of his peers who dabbled in magical realism (there’s a Keystone short where Mabel Normand and Roscoe Arbuckle deal with a Ford that acts like a temperamental mule), Semon’s work tends to stay anchored to the real world–a very exaggerated world, yes, where people fall ten stories and land without a scratch, but one whose causes are literal. The characters fall ten stories because the villain threw them out the window, or because he blew up the silo they were climbing on, or because he jumped on the end of the see-saw they were sitting on–that sort of thing.

And other changes could be due to trying to “update” the story–not something we tend to consider when the film is 90 years old! (I might add that Hollywood has done this countless times since with various fairytales.) We have an older Dorothy more in tune with ’20s heroines and women in the royal court of Oz wearing modern gowns. Technology like airplanes proudly feature in a couple scenes. Orientalism, a popular decorating and fashion trend at the time, obviously inspired the look of the Oz palace. And the plot itself isn’t just “updating” the book, but also the very popular 1902 stage musical. 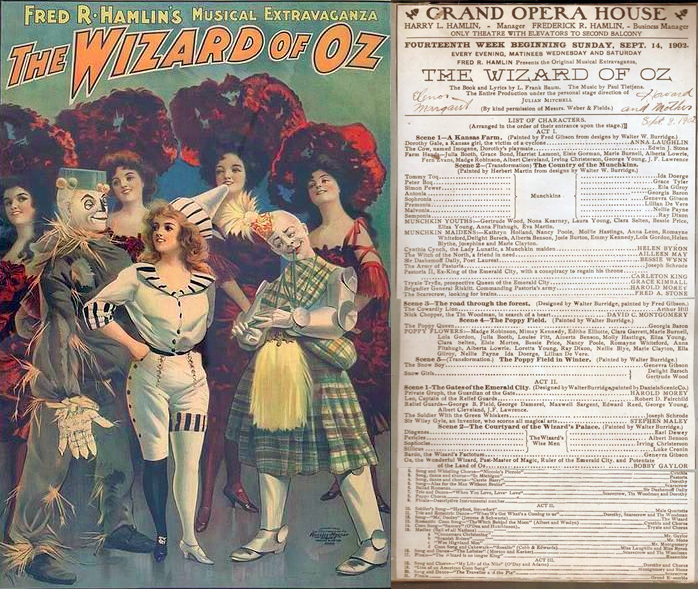 A poster and original program from a Chicago performance.

If you had lived in the ’20s you probably would’ve had fond memories of going to see the musical. L. Frank Baum himself wrote the script, aiming it mainly at children, although joke writer Glen MacDonough added topical humor for adults’ benefits–exactly the way animated movies today will include humor just for the adults. Like the 1925 film, the musical relied on names that were silly puns, featured a lot of slapstick, and removed many magical elements such as the Wicked Witch of the West and fantastical talking creatures (the Cowardly Lion did not speak in the stage version). Many of its costumes–particularly the Scarecrow’s–were also imitated in the 1925 film. Thus, Semon’s ideas did not come entirely from a bubble. (Earlier Oz films, such as The Wonderful Wizard of Oz from 1910 and The Patchwork Girl of Oz from 1914 probably inspired certain elements of Semon’s version as well.)

How did people respond to the film back then? Well, while it wasn’t loved–some fans even wrote into movie magazines to ask “Mr. Semon, How Could You?”–it wasn’t necessarily hated, either. It did fairly well at the box office (no, Chadwick Pictures did not go bankrupt). The overall response by critics can be summed up as: “Meh. Kids will like it.” This Motion Picture Magazine review is pretty typical:

One of the hard-boiled New York Times critics even gave it a very upbeat review after going to a successful showing:

It was obvious that the youngsters enjoyed every moment of this picture, and as critics of such a production they excel. At the same time there was a constant outburst of parental mirth elicited by the humorous antics of the shadow players and the witty subtitles in this fantastic farce…Persons in the audience not only laughed till the tears came but they roared until they coughed. One little boy stood on the sidewalk immediately after seeing the show and shouted jubilantly: “And here we are back in New York!”

If you want to look on the bright side a little more, The Wizard of Oz has good production values, from the cinematography to the lighting.  I’m intrigued by the surprising design of the toymaker’s shop too, which seems to have a touch of German Expressionism. Why wasn’t that added to more of the Oz scenes? (Man, imagine a straight-up German Expressionist Oz film–now that would’ve been an eye opener!)  The slapstick is silly and repeats a lot of gags from Semon’s shorts, but it’s more well-done than you might think.

The costumes were decent, too.

I’d say that most people who check out this film probably suffer from “I Don’t Watch a Lot of Silent Comedies-itis,” in various degrees. There’s the harmless, first degree IDWALOSCitis, where the folks have watched some Lloyd, Keaton, and Chaplin and thus are acquainted with silent comedy but rarely venture beyond those safe waters. Then there’s second degree idwaloscitis (it’s a new word now!), which strikes people who love old movies from, ya know, the ’30s through the ’60s, who’ve maybe seen Metropolis and City Lights but that’s about it. Third degree idwaloscitis, however, is pretty serious, and in its darkest stages sufferers have a seeming allergic reaction to anything “black and white” and worry about watching anything more than thirty years old because it might not be PC.

To these viewers, unfamiliar with Semon’s work and not knowing that the ’20s liked to modernize stories too, The Wizard of Oz‘s flaws are going to become magnified–no wonder it has such a lowly reputation.  Certain elements such as Spencer Bell’s stereotypical “scared black” character doesn’t help either (we first see him eating a slice of watermelon, no kidding).  Oh, and there’s a projectile-vomiting duck. Yes.

In my opinion, The Wizard of Oz is disappointing and not something to show to everyone, but it’s maybe a tad underrated.  By no means do I think it’s the worst film of the silent era–if anything, its decent enough in its own way but middling.

But oh for the cute and magical fantasy film this could have been, if only Larry had dared to think outside his comfort zone!

Note: Screengrabs are from the always-excellent Movies Silently–thanks, Fritzi!