There really aren’t a ton of movies I’ll see in the theater. Big blockbuster extravaganzas like The Force Awakens or Dr. Strange? Of course! The usual marvelous offering by Pixar? I’m there! An occasional indie might peak my interest, and naturally I’m attracted to any silent or classic film showing like a bee to the can of pop you’re holding. (If only those showings weren’t so few and far between.)

But when I caught wind of a brand-new musical drama set in modern-day L.A. that included–could it be?–subtle homages to Hollywood’s Golden Age, I thought: “Yes, please!”

And what a sincere,  refreshingly impressionistic film it was. Mia (Emma Stone) is a would-be actress struggling to make it in Hollywood, plugging her way through endless auditions while working at a coffee shop on a famous studio lot. Sebastian (Ryan Gosling) is a pianist with a passion for classic jazz, hoping to open his own jazz club. Their “meet cute” is far from cute, and when they bump into each other again they trade barbs, but one evening after a party they take a stroll together through Griffith Park. They pause to take in a famous panoramic view of  L.A., and soon, like the Astaire/Rogers pairings of old, they’re dancing together.

Yes, La La Land has that usual boy-meets-girl plot, but somehow it feels right against that familiar, well-worn, but still glittering background of Hollywood. After all, this was the birthplace of a thousand cinematic romances.

Emma Stone and Ryan Gosling are probably La La Land‘s greatest strengths, both having the charisma and the acting chops to keep us rooting for their characters even through the predictable stretches of “going through misunderstandings.” While they don’t have the benefit of years of song-and-dance experience, they work together smoothly in the musical numbers (choreographed by pro Mandy Moore). Besides, any slight wobbliness in their routines not only fits the 21st-century requirements for “identifiable” young characters, but it’s kind of to be expected: we simply don’t have Gene Kellys or Fred Astaires anymore. The movie seems to know this–and accepts it humbly, I might add.

Folks  who are musicalphobic (alas, my brain cannot comprehend) should know that the musical numbers are incorporated into the story pretty cleanly, with occasional piano solos or jazz band performances filling in for the usual “sudden bursts into song.” 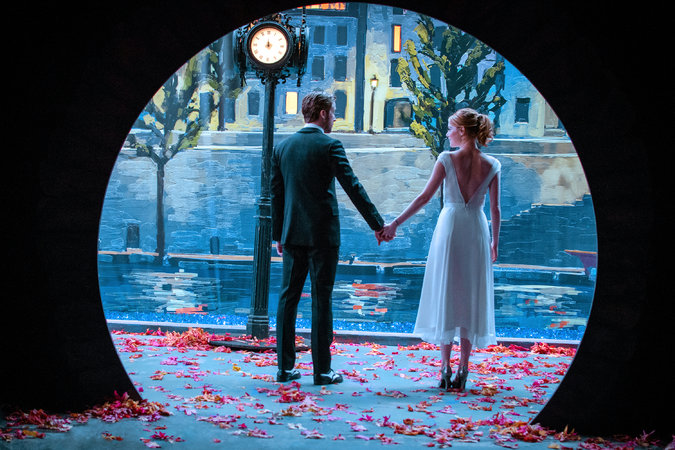 Other things I enjoyed about La La Land: the opening, because what could be more L.A. than a musical number set in bumper to bumper traffic? Recognizing various Hollywood spots from my wide-eyed tourist ramblings in the last couple years. Those lovely bright colors, especially Mia’s well-curated selection of dresses. And Sebastian explaining his passion for jazz, lamenting how it’s dying due to lack of interest, but resolving to help keep it going. Well, I perked right up there. Having a deep love for an exciting, pioneering artform from earlier times that’s obscure and overlooked today? Gee, what does that remind you of!

And, of course, I kept my eye open for the nods to old Hollywood, such as Mia pointing out a window used in Casablanca and the Singin’ in the Rain-inspired backdrop in one number. Take note, silent fans, for our own passion is represented here too (which is a big reason why I decided to review it). We see Mia walking by murals depicting Roscoe Arbuckle and Louise Brooks, and the old movie posters decorating her apartment include a couple starring–no kidding–Corinne Griffith and Norma Talmadge. Norma Talmadge, you guys!!

That’s not one of them, but it’s the closest I could get.

A perceptive New York Times review commented, “Contemporary American movies could use more s’wonderful, more music and dance, and way, way more surrealism. They’re too dull, too ordinary and too straight, whether they’re mired in superhero clichés or remodeled kitchen-sink realism.” In this respect La La Land represents some hope, hope for more films that are confident enough to be creative and wise enough to avoid self-conscious cynicism (perish the thought).

With all that said, La La Land is certainly not free of certain weaknesses that modern films are commonly saddled with. One is a pet peeve of mine that I see over and over and over again. It’s–what would even be a good term for it? The Great Dulled-Down Stretch? This is the point about 2/3 of the way through a movie when the characters Have Misunderstandings, or Get Very Introspective. There’s lots of long, quiet conversations and long, lingering looks and long, lingering shots. There’s shadows and dim lighting, for some reason. Relationships Change. Advice Is Given. The Theater Audience Gets Bored. Every dang director in the universe today seems to feel that it’s perfectly impossible to get a character arc from point A to point B without practically grinding the movie to a halt, and I for one demand that this dreadful practice end. 1920s directors like Harold Lloyd got it right–start off slow, then build to a thrilling climax. What’s changed?

Another peculiarity of the Great Dulled-Down Stretch is that this usually where a film loses its flair–in this case, the nods to old Hollywood. They’re peppered throughout the first half of the film, but once the Dull Stretch begins the film seems to forget about them, until it revives itself in the final quarter. I swear I noticed this in the recent The Great Gatsby, too. “Look! Look, we did our research! See, we put ‘Mae Murray’ on the theater marquee! Lookee!…Okay, that’s enough for now.” I love little homages and references, darn it, and I want them stuffed into as many frames as possible.

I might not call La La Land an outright masterpiece, but one of the best films of 2016? Absolutely. And a large part of why it succeeds so well is because it knows its roots, and is happy to honor them. In a time when so many historic Hollywood buildings and landmarks have been torn down, a time when so many cinematic pioneers are neglected, it’s refreshing to see that parts of “the industry” still care. And I for one look forward to La La Land‘s future Oscar wins.