This post is for MovieMovieBlogBlog‘s 1st annual Laurel and Hardy blogathon. While this post is not Silent Horror-related per se, have you seen our dear Stan Laurel’s eyes with that 1910s makeup?!

Did you know that Stan Laurel and Oliver Hardy both had long careers in silent comedy before they were finally teamed up?

It’s tough to imagine Stan without Ollie, or vice versa, but surprisingly their solo silent careers were quite prolific. Here’s a couple brief rundowns on what they did before becoming “Laurel and Hardy”:

Stan was originally a music hall performer in England, a member of Fred Karno’s popular troupe “Fred Karno’s Army.” One other member that you might’ve heard of is Charlie Chaplin–Stan usually acted as Chaplin’s understudy!

I just blew your mind.

This troupe would tour the U.S. more than once in the early 1910s. Eventually, Stan decided to stay in the U.S. and act in vaudeville (as a Chaplin impersonator!). He started acting in comedy films in 1917, and worked for Metro, Roach, Universal, and then Roach again where he was officially teamed with Oliver Hardy in 1927.

Oliver Hardy performed in minstral shows as a boy, worked in a movie theater as a young man, and became convinced he could be as good an actor in films as any of them. He got his start with the Lubin studio in 1914, in comedy shorts.  Throughout the years he would often be nicknamed “Babe” Hardy.

The list of companies he worked for both as a stock actor and freelancer gets bewildering: Pathe, Casino, Edison, Vim, King-Bee, Vitagraph, and more.  If there was a comedy film studio in the 1910s, Ollie probably worked for it. His best-known early role was as the Tin Man in Larry Semon’s strange The Wizard of Oz (1925), a couple years before starting to work with Stan.

I just blew your mind again.

But Stan and Ollie’s teaming in the late twenties wasn’t the first time they had worked together onscreen.  No, that honor goes to the aptly-named The Lucky Dog (1921), filmed by Sun-Lite Pictures and starring a slight young Stan as a quick-witted go-getter. Ollie, purely by coincidence, was cast in a smaller role as a thug. Thanks to this coincidental pairing we have film footage of the two performing together remarkably early on. They’re even both featured on the poster!

In this two-reeler, Stan gets thrown out of his apartment for not paying his rent. He encounters a little stray dog that he takes a liking to and decides to keep. He accidentally crosses paths with a thug (played by Ollie!), in the process of mugging someone.  He then tries to mug Stan, resulting in Ollie’s first official “words” to him:

I guess Stan finally went too far this time.

Stan uses his wits to escape the thug, much to Ollie’s ire. He then tries to enter his little dog in a dog show, in hopes of getting to know a young lady who’s entering her pet poodle. One thing leads to another and he’s thrown out (once again!) and the girl looses the poodle. He offers her his little stray dog as a replacement, and they end up taking the dog back to her family’s house. Her boyfriend (because of course she has one) is none too pleased at seeing Stan with his girl, and teams up with Ollie (who’s still sore) to exact revenge.

Ollie, disguised as a “Count,” eventually gets Stan alone in the parlor and informs him that he will soon meet his doom. This leads to Stan’s first official “words” to Ollie:

Of course Stan doesn’t really meet his doom, and the villain is eventually defeated thanks to the stray dog and a convenient stick of dynamite.

The Lucky Dog is a pretty good short, although it’s rather run-of-the-mill comedy fare of the time–a quick-witted young hero, a blundering villain, a girl, a cute dog, some chase scenes and a few people getting kicked through doorways. But it’s fascinating to those of us who grew up with Laurel and Hardy.  The two are somehow simultaneously familiar and unfamiliar.

From Randy Skretvedt’s Laurel and Hardy – The Magic Behind the Movies.

Most of the footage goes to Stan, as the star, and his natty young character is a far cry from the slow, gentle Laurel of later films. The former Chaplin impersonator is still a little Chaplinesque in his mannerisms and movements, including kicking the thug in the pants and flirting with the girl with cheerful charm. Ollie, although he’s playing a villain, is definitely our Ollie, blustering and easily annoyed even at this stage. And the cherry on top is that he’s even wearing a small mustache–smaller than many typical villain ‘staches of the day! 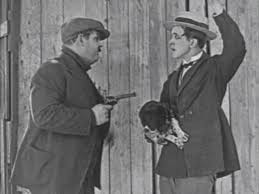 Amazingly, their first scene together gives us a little glimpse into their future partnership. Ollie tells Stan to put ’em up.  Stan holds up just his left arm, having the little dog in the other. “No, put ’em up!” Stan switches the dog to the left arm and holds up the right. “Put ’em both up!” Stan hands Ollie the dog so he can put up both his arms. Ollie puts the dog down in frustration. “Now turn around!” Stan obligingly spins around and faces him again.

This type of scene, with Stan making an incredibly simple task irreducibly complex to Ollie’s increasing rage, would become a staple of future Laurel and Hardy films. The Lucky Dog shows how this humor was very much “Classic Stan”–and shows how naturally Ollie could complement it.

Their next scenes are less typical (in one very undercranked shot Ollie beats up Stan, with some of the shots substituting a dummy!) but it’s still clear that they can work together remarkably well.

In spite of their onscreen chemistry, The Lucky Dog was just a fun coincidence in Laurel and Hardy’s careers.  It would be several years before their partnership, and even then it took a little time for producers to realize what comedy gold they had on their hands.

They would even team up with a cute little dog again.

But, as we classic comedy fans know, the rest was history…and thanks to The Lucky Dog, that history is just a little richer.