Comic book fans! Enthusiasts of Batman, Superman, Spider-Man and others! There is a man whose poster should have a place in all your homes. A man whose films you should have committed to memory. A man whose name should be considered sacred, as venerated as that of Stan Lee.

And whose image should be adorned with similar heavenly rays.

And that name is (wherever you are, pause to observe a moment of silence, refresh your mind, reflect on your past sins, and decide if your heart is worthy): 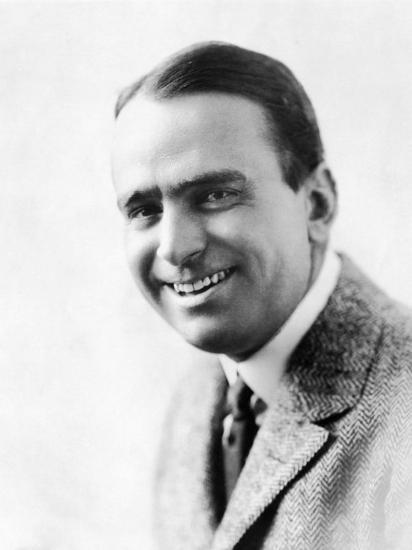 Fairbanks, the great athletic filmmaker with a zest for stuntwork and life in general, was the unofficial King of Hollywood during the late ’10s and the ’20s (with the legendary Mary Pickford being the Queen). Men wanted to be him. Women went for him. His family-friendly films, from The Mask of Zorro to The Thief of Bagdad, appealed to everyone with their blend of fun and adventure.

Even the jealous guys couldn’t help liking him (a humorous poem from Photoplay, Nov. 1917).

And “Doug” was a hero to young boys especially. They all wanted to be like that fearless, grinning rascal who could scale even the most impossible buildings and who laughed in the face of heart-stopping danger.

He even released a book on the subject.

How many kids back then tried to do their own stunts after watching a Fairbanks film? How many of them tried leaping over walls and sliding down curtains? The number must’ve been in the thousands! (You might ask how many of them ended up with bruises and broken bones, too.)

Fairbanks not only brought out kids’ inner daredevils but had an influence on their imaginations that has reverberated all the way to today’s culture. That’s right–culture happening right this minute. For aside from his obvious influences on the action-adventure genre itself, Fairbanks was a key factor in the evolution of the multi-billion dollar superhero genre (you may have heard about it here and there).

Let’s go back a ways to the year 1933, the midst of the Great Depression and the same year comic books were first popularized in the U.S. Students Jerry Siegel and Joe Shuster decided to create a character they called “the Superman,” who was initially a bald villain with telepathic powers. Later that same year Siegal decided to reboot Superman, this time as a hero with incredible physical abilities. Shuster, the artist, designed Superman’s look based on…the very athletic Fairbanks.

Image from Sales on Film.

In a 1983 interview, Shuster stated: “He had stance which I often used in drawing Superman…you’ll see in many of his roles, including Robin Hood, that he always stood with his hands on his hips and his feet spread apart, laughing–taking nothing seriously.”

Siegel and Shuster also gave Superman the mild-mannered alter ego Clark Kent (who had glasses a la Harold Lloyd). Alter egos had become popular through stories about the Scarlet Pimpernel, the Lone Ranger, and especially Zorro. And who had helped make Zorro a household name? Why, Fairbanks, of course, whose The Mark of Zorro had been a huge hit in 1920.

And thus the Fairbanks-esque Superman made his comic book debut in 1938, and has been an American cultural icon ever since.

Once Superman was on the scene the pressure was on to create more superheros. In 1939 comic book artist Bob Kane came up with what he called “the Bat-Man,” based on memories of the film The Bat Whispers (1930), da Vinci’s diagram for his “ornithopter,” and, most importantly, our man Fairbanks.

Like Siegel and Shuster, Kane was the most influenced by The Mark of Zorro in particular. Certain traits of his “Bat-Man” were more than a little similar to the rapier-wielding hero. Observe:

In a 1989 article for People Kane stated:

As a kid, I was a movie buff. One of my favorites was The Mark of Zorro, with Douglas Fairbanks Sr. Zorro had the dual identity. By day, like Bruce Wayne, he feigned being a bored, foppish count, the son of one of the richest families in Mexico. By night, he became a vigilante. He would disguise himself, wearing a handkerchief mask with the eyes slit out. He exited on a black horse from a cave underneath his home, and that’s the inspiration for the Batcave and the Batmobile.

It’s safe to say that if it wasn’t for Fairbanks we would never have had Batman at all (*collective shudders run spontaneously through fandom, although they know not why*).

The creators of Batman and Superman weren’t alone in citing Fairbanks as a source–Captain America and the Green Lantern were also modeled after him. But honestly, how many classic comic book heroes have masked secret identities, alter egos, amazing physical abilities, etc.? Practically all of them.

You could plausibly argue that the artists of the “Golden Age” of comics were tapping into their collective childhood memory of Fairbanks’s heroes on the big screen. Thus, if it wasn’t for Fairbanks, not only Batman and Superman but the superhero genre itself might not exist–at least not the way we know it today.

And the world would be bereft of many an online argument.

We can’t overestimate the huge debt the superhero genre owes to Fairbanks. But we can honor his memory by continuing to watch and share his silent era films, especially with anyone who’s a fan of Marvel and D.C Comics. They are the gift that keeps on giving, from a personality who was truly larger than life.