This is the final post for Keystone Month. (Ah, how quickly these 31 days have passed!) A hearty thanks to all of you for dropping in during these past few weeks–I truly hope you’ve been inspired to become as fond of Keystone as I am. And if you’re already a fan, thanks for celebrating with me!

Amid the vast output of silent comedy, there are a few films that can be upheld not only as classics, but as works of art: The General, Our Hospitality, The Kid Brother, City Lights. It’s a worthy list, but one that will always be incomplete without the addition of Roscoe Arbuckle’s charming Fatty and Mabel Adrift.

The poetically-titled three-reeler was directed by Arbuckle for Keystone in its Triangle days and released in 1916 as WWI was roaring across the Atlantic. At the time Arbuckle was one of the biggest names in Hollywood and was being given the freedom to make his films precisely the way he wanted. And what he wanted was as carefully crafted and sophisticated as anything the “art” directors could dream up. Fatty and Mabel Adrift represents a blend of Arbuckle’s innate talent and everything that made Keystone great–charismatic comedians, quality editing, and a slapstick climax whose visuals stick long in your mind.

The opening alone is iconic, establishing the backstory we need with some early special effects. “They lived in Sleepy Hollow,” the title card says. An idyllic countryside scene is overlaid with a heart; the background fades to black as first Mabel’s and then Roscoe’s smiling faces appear inside what are now heart-shaped frames. In one of the most famous images in silent comedy, the hearts entwine to form an image you might see on an antique Valentine’s Day card. But the mood isn’t too syrupy–romantic rival Al St. John’s grinning face also appears inside a heart. Having lost his girl to Roscoe, he cries as the “heart” shatters.

Much of the plot of Fatty and Mabel Adrift is familiar Keystone territory. The country boy falls in love with the pretty farm girl and the two are married in a cute country farm wedding. Her spurned rival vows revenge, which is certain to be carried out somewhat ineptly. What sets it apart from most Keystones is the graceful handling of the story–the short seems more like a mini-feature–and the surprisingly elegant cinematography. Roscoe and his faithful dog Luke (who proves to be pivotal in this film) are silhouetted against the sunset on the sea. The quaint cottage is cozy with firelight. Roscoe peers through the window at a storm amid flashes of lightening. In another iconic image, perhaps the most famous in the film (later paid homage by Buster Keaton in The Navigator), Roscoe’s shadow “kisses” the sleeping Mabel. Ah, my friends, Keystone could be art.

Then, of course, there’s the charm of the climax. Al and some fellow rogues sneak through the storm and push the cottage off its foundations and out to sea. We see the interior filling up with water as Roscoe and Mabel slumber unawares in their floating beds. It’s an image both mildly cartoony and purely in the realm of silent comedy. 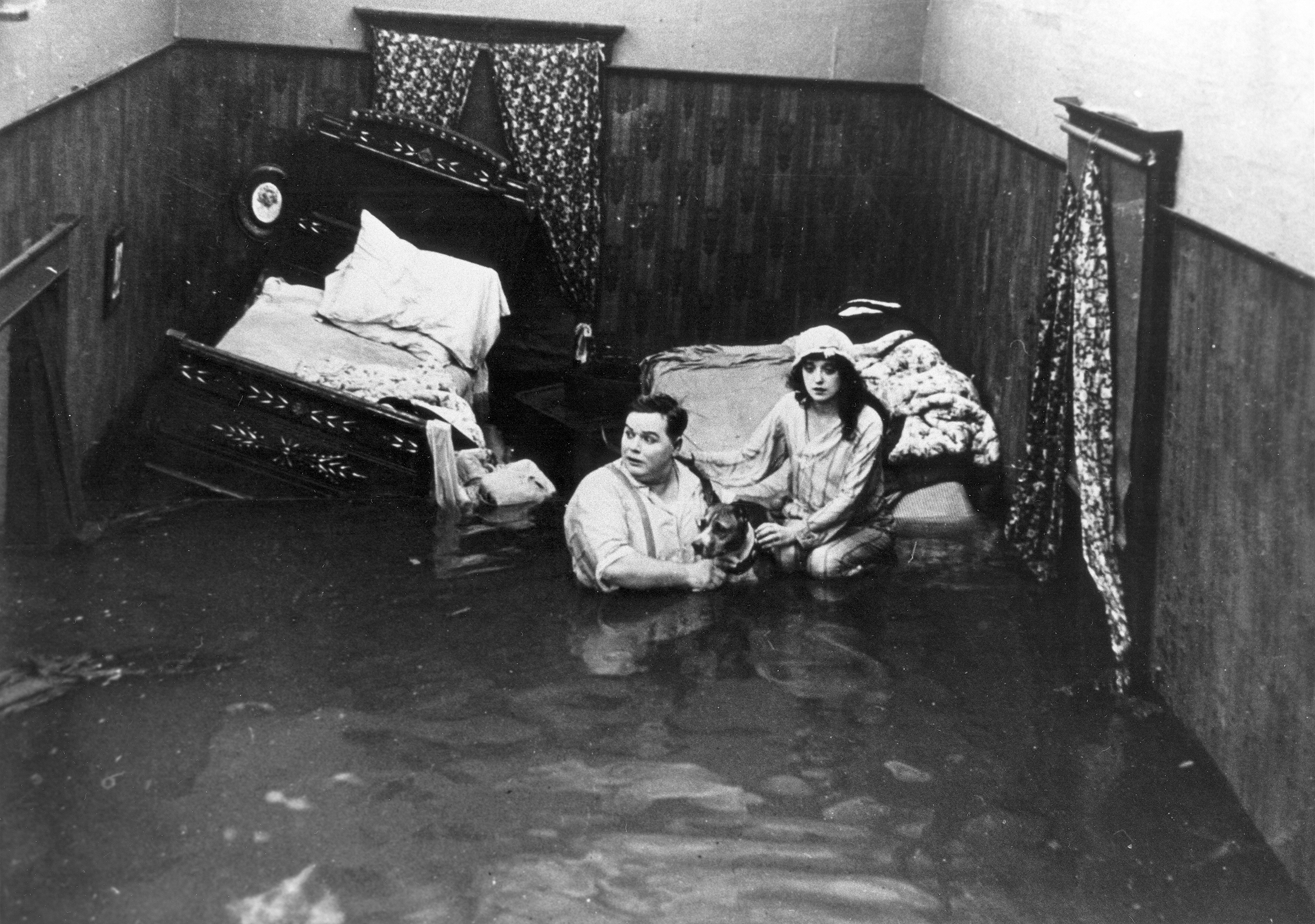 Fatty and Mabel Adrift is first and foremost a lighthearted film, with plenty of “bits of business” amid piles of hay and around dinner tables with patterned tablecloths. Roscoe and Mabel were audience favorites, teamed up in film after film, and here we can certainly see why. In one scene the newlyweds are trying to eat Mabel’s indigestible cooking, and Roscoe tries unsuccessfully to break apart one of her hard-as-nails biscuits. (He offers it to Luke, who sniffs it once and turns away.) Mabel bursts into tears, and an apologetic Roscoe hugs her–while stealthily smashing a biscuit open so he can make himself eat it and show her that “they aren’t really so bad.”

As the villain, Al St. John seems like the living bridge between the cartoon world and the real. His acting can seem a bit over the top to us today, but it does work within the type of setting where a full-size house can bob on the surface of the sea. He helps support the lighthearted mood–a less caricatured villain menacing the innocent Roscoe and Mabel would not have fit nearly so well.

For decades Roscoe Arbuckle was dismissed as being a lesser clown than Keaton or Lloyd or even some of the minor clowns, thought to have been “loved not so much for what he did as for what he looked like,” as Walter Kerr put it. How that tide is changing today, as his films are being lovingly restored and made more available than ever before. Fatty and Mabel Adrift might be the best example to prove that he was not only a brilliant comedian, but a filmmaker whose eye could be as artistic as any of the Big Three’s.

Fatty and Mabel Adrift is one of the essential silent comedies. It has the sort of greatness that can be classed with Chaplin’s Mutuals or Buster Keaton’s shorts. It’s sweet, timeless, and has a refreshing lack of self consciousness, in spite of its undeniable art.

The best, and definitive, restoration of this short is on The Mack Sennett Collection Vol. 1., one of my most important resources during Keystone Month. I plug it because I love it!

12 thoughts on “Thoughts On: “Fatty and Mabel Adrift””