Regular readers already know that I’m a Fazenda fan, and if you’re new around here, you should be too. A brief review of her career: Born in Indiana but raised in Los Angeles, Louise was Portuguese, French and Italian and her parents ran a small grocery store. Getting the acting bug, she got a few small stage roles before becoming an extra at Universal, eventually ending up in Universal’s slapstick Joker Comedies. This gave her the experience to hop over to the mighty Keystone Film Company, where she was happy to wear plain makeup and old-fashioned clothes and was willing to perform all sorts of crazy slapstick stunts (not all actresses were quite as easy-going). Soon she was one of Sennett’s top comediennes. She would keep her Old World-sounding maiden name, the Portuguese “Fazenda,” for her entire screen career. 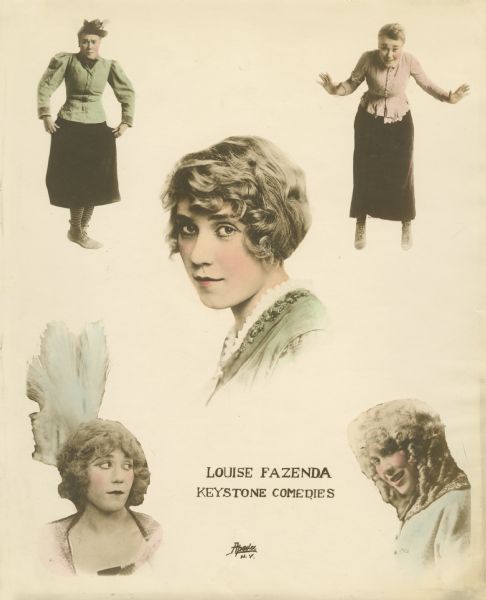 A Bear Affair is a bit run-of-the-mill, as Keystone shorts go. Frank Opperman plays the keeper of the Bear Gully hunting lodge, and Fazenda is his wife. Their teenage daughter (Cecile Arnold) is the sweetheart of their hired hand (Harry McCoy), who’s an amateur photographer. A big game hunter imaginatively named Baron Von Hunter (Dave Morris) comes to the lodge to hunt bears–I love the letter he sends them, written in Keyston’e cheerily blunt style:

“Woe to your bears.”

While being shown around the grounds by Fazenda, he starts trying to work his charms on her–her husband be darned. They’re interrupted by an overly-curious bear, which leads to a panicked chase scene. (Yes, the lead actors are acting with a very real, and hopefully very well-trained, bear.) The daughter and hired hand witness all the chaos and mischievously decide to take pictures of the Baron and Fazenda in (innocently) compromising positions.

They take their mischief further by showing the “spicy” photos during the lodge’s magic lantern show (a magic lantern show!). Seeing this photographic evidence, the father becomes furious and the flustered Baron tries to claim Fazenda made the first move. This makes Fazenda furious, and she grabs a pistol and chases the Baron around the house. (As you do.)

We can add A Bear Affair to a long list of films with “secret photographer’s revenge” plots, where embarrassing photos or footage proves a character was lying (usually lying to a spouse). It shows up in many films: Bobby’s Kodak (1908), The Cameraman’s Revenge (1912), The Tale of a Black Eye (1913), A Reckless Romeo (1917), Sons of the Desert (1933)–the list goes on. The latest technologies were, shall we say, easy fodder for comedy studios.

Worth a watch, no? I’d say so. Obviously I enjoy A Bear Affair mainly for Fazenda’s performance. Despite what some might ardently believe about this supposedly prim and rigid era, quite a few early 20th century actresses were rough and tumble. Fazenda’s one of the best examples, gallantly willing to be knocked down, kicked in the rear, or submerged in mud puddles up to the neck in the noble line of slapstick duty. I was also happy to see trouper Harry McCoy, one of Sennett’s hardest working performers, doing what he could with his small role, and the white-eyed Dave Morris hamming it up with glee (hey, blue eye didn’t photograph well back then!).

Since A Bear Affair was just your run-of-the-mill Keystone release–because at Keystone, the risk of getting mauled by a bear was called “Tuesday”–there were few reviews of it at the time. I did find one in Motion Picture News, which praised Morris but added “there is too much vulgarity mixed up with the comedy. Some of it will doubtless be eliminated.” Which is referring to the normal practice of local censors cutting out scenes and title cards they thought their audience might find too risque. While you might watch this short a few times and wonder where all the vulgarity is, all the derrière wiggling is a clue. As is the title of the film–it can be a vaguely naughty pun! Also, the print is fuzzy, but is that a chamber pot McCoy’s emptying on the angry father’s head? It can’t be…can it?

I mean, he lifts it off the floor, it’s the approximate size, it has a handle…anyhow.

Anyone who delves into the Keystone filmography is probably familiar with classics like Bangville Police (1913), Fatty and Mabel Adrift (1915) or Barney Oldfield’s Race For a Life (1913) (the latter’s sometimes mistaken for a genuine “girl tied to railroad tracks” drama–nope, all satire, my friends). But it’s also worthwhile to go off the beaten track and explore these smaller films, if only to pay respects to actors who stunted with live bears, raced around flimsy sets and kicked each other in the shins–all in a days’ work.

The only place I’ve been able to find this film is on Archive.org: https://archive.org/details/ABEARAFFAIRLouiseFazenda. The print, as you’ve noticed from the screenshots, is very fuzzy–but fuzzy is better than nothing!

I found Anthony Balducci’s book The Funny Parts: A History of Film Comedy Routines and Gags very helpful for parts of this post. Highly recommended reading!

This post is proud to be part of the Luso World Cinema Blogathon, hosted by my friends Spellbound by Movies and Critica Retro! This blogathon celebrates the many key figures in Hollywood with Portuguese (or “Lusophone”) ancestry. There’s lots of great posts this week, so be sure to check them out! And if you’re new to Silent-ology, thank you so much for stopping by–pour yourself a highball and feel free to make yourself at home!