This is the last post of WWI in Film Month. Many thanks to all who’ve been following along the last few weeks! This subject could easily fill years of blog posts all by itself. September we’ll be back to “normal,” but I know I’ll continue studying about World War I in the years to come. It was the game changer of the 20th century, without a doubt.

On this day back in 1918, the Battle of the Scarpe ended, and Bailleul, France was retaken by the British. Armistice Day was only two and a half months away.

By 1925, the Great War had been over for seven years. No one back then dreamed it would one day be the “first” World War. Millions of people had mourned their dead, and countless wounds both literal and figurative had been slowly healing. But the scars were deep and permanent, even as the world moved on to the prosperity and gaiety of the 1920s.

By 1925 the frenzy of the 1910s anti-Hun propaganda was a strange, fading memory (although its effects on German Americans were long lasting). With the battles long over and the cities and villages of Europe slowly repairing themselves, people were able to step back and look at the Great War with more objective eyes. Director King Vidor was one of those people, and the result was his magnificent drama The Big Parade.

His timing turned out to be perfect, for The Big Parade would be one of the biggest hits of the entire silent era, its box office gross second only to The Birth of a Nation.

The studio behind the blockbuster was MGM, then only a year old and headed by “Boy Wonder” Irving Thalberg. Director King Vidor, who had worked on numerous smaller films, had a hankering for a more epic project. He felt enough time had passed to create a truly great drama about the Great War, and Thalberg agreed.

A great drama would of course need great actors, and Thalberg decided John Gilbert should play the leading role of Jim. Known for playing romantic leads, the darkly handsome Gilbert wasn’t Vidor’s first choice for the “Everyman” soldier, but he soon proved himself. Vidor recalled later: “Gilbert never read the script of The Big Parade, and there were other actors of the period like that. They had faith and confidence in you…I actually remember moments when I didn’t say a thing. I’d just have a quick thought and Gilbert would react to it.”

Renée Adorée was cast as Jim’s love interest, the French girl Melisande. She also proved to be a valuable member of the team, making suggestions for her scenes and occasionally ad-libbing “bits of business” (as did Gilbert, who she had worked with in the past). Venerable stage and screen actors Claire McDowell and Hobart Bosworth were brought on board as Jim’s parents. Jim’s friend “Bull,” the bartender, was portrayed by Tom O’Brien, and Karl Dane got the part of tobacco chewing “Slim.” (All the tobacco spitting grossed me out after awhile, but his character does get an opportunity to develop more toward the end.) 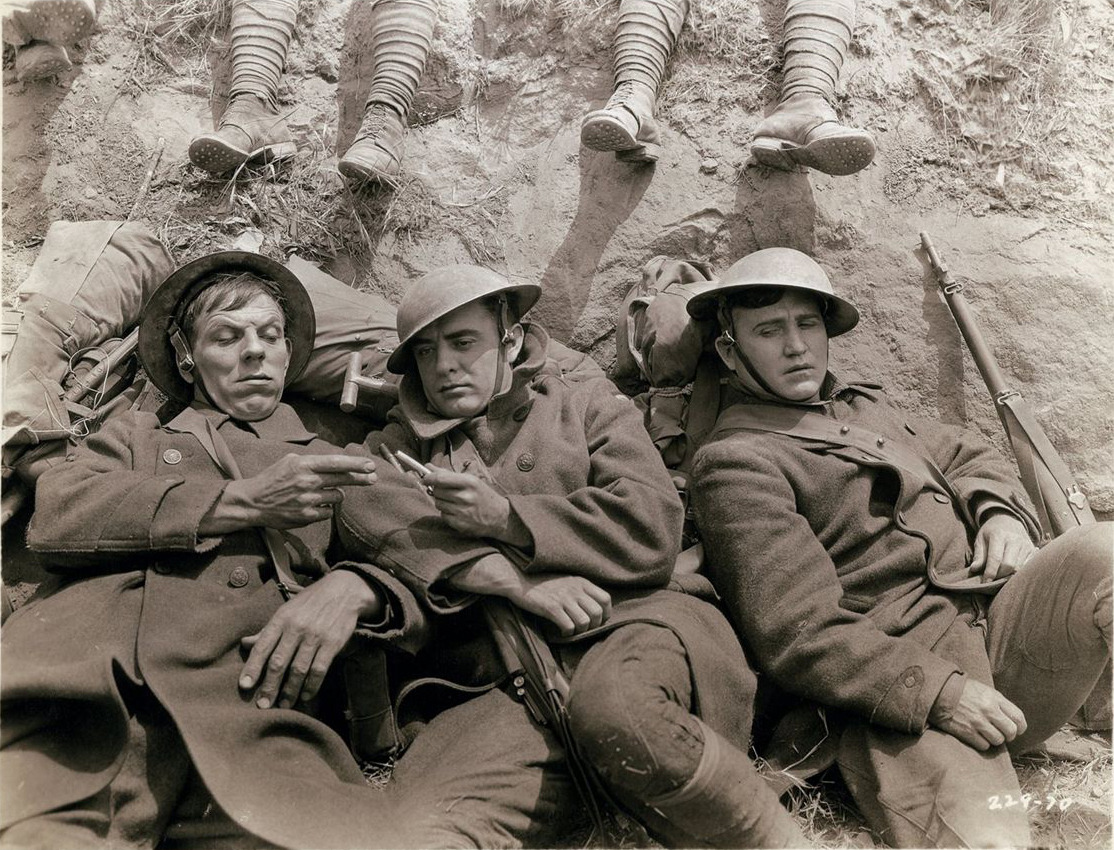 In the first half of the film, the “idle rich” Jim decides to enlist in the war and is sent to France. He and his fellow soldiers are stationed in a small village, where Jim gets to know a pretty, self-assured French girl. The second half focuses (with grim detail) on Jim’s experiences in the battlefields.

The village scenes have that blend of drama and humor that the silent era did so well, as Jim and his buddies adjust to the decidedly non-thrilling aspects of being a soldier (one of the first things they have to do is shovel manure out of a barnyard). One scene in particular became very famous–Jim shares some gum with Melisande, which she’s never had before, and she’s not sure what to do with it. After Jim tries to explain it’s meant for chewing (Melisande speaks French and he doesn’t), she ends up swallowing it.

The first half of The Big Parade is certainly charming and entertaining, but the second half took the film to the next level–not the least because of the amount of extras, trucks and planes used in many epic-scale shots. The first battle scenes were based on the Battle of Belleau Wood, which took place in 1918. In a harrowing, well-shot sequence, Jim and his fellow soldiers go on the attack by advancing in lines through the quiet forest. First one soldier is hit by sniper fire, then another, and another, but the grim march must continue. It’s both horrifying and spellbinding.

Also engrossing were the scenes on the open battlefields, where Jim and his buddies spend the night taking refuge in shellholes, dodging shrapnel and showers of dirt from exploding shells. Impressive amounts of ammunition were used for these ferocious scenes, as well as skillful lighting illuminating the clouds of dust and grit.

This, of course, would not have qualified as useful propaganda back when the Great War was actually taking place. Which is not to mean that The Big Parade wants to be explicitly anti-war–not exactly. What it does is show war for what it is–terrifying, tragic, punctuated by moments of heroism and many moments of death. It feels real and raw, yet somehow it does not judge–neither the American soldiers, nor the Germans, who are portrayed as simply soldiers following orders.

Another iconic scene shows Jim, traumatized and enraged by the death of a friend, coming face to face with a German soldier. Holding the bayonet to the soldier’s throat, he is about to kill him but finds he can’t go through with it. The enemy, after all, was human and merely following orders just like himself. Noticing the German soldier’s wounded, Jim gives him a cigarette. The Big Parade was not only a box office hit, but a critical one as well. Exhibitor’s Herald wrote at the time:

It is inevitable that The Big Parade should be compared with The Birth of a Nation, which has been commonly accepted as the outstanding production of the screen. A picture can be no greater than its theme and as the theme of each of these patriotism, they enjoy therein a common advantage.

But…The Big Parade enjoys many advantage over The Birth of a Nation. The many years of technical progress which the industry has traversed since the production of the Griffith masterpiece leave an effective imprint upon the newer creation; also, it has a greater spirit of genuineness about it, doubtlessly due to the fact that its author has lived through the events he has written about and his pen has been that of a participant rather than that of an historian and novelist.

This author was screenwriter Laurence Stallings, the key to The Big Parade‘s success. An actual WWI veteran who had lost a leg during the fighting, Stalling later wrote a book called Plumes about his experiences which was adapted into the film. His contributions were definitely noticed:

The Big Parade has about it a vividness, a genuineness and a reality that could only have been achieved by an author who had lived through the drone of German machine gun fire, trench mud and the peculiar psychology that came to be imposed upon the participants in the Great War. Mr. Stallings does not picture the war for the spectator; he actually takes you into it. He does not moralize about his subject matter and he does not even dramatize it; he simply takes the spectator to France with the American doughboys in the great days of 1919 [sic] and permits him to experience sensations, situations, and events that range from the ridiculous to the tragic.

This all gave the film a unique power that’s lead some to call it the first “realistic” war picture.

The Big Parade has fortunately survived in lovely condition, and has been given one of Carl Davis’s customarily brilliant scores. It would be a phenomenal film to experience on the big screen with live accompaniment. And if you ask me, with its blend of romance, humor, and gritty realism, all set during the conflict that changed the world so drastically, it’s not hard to see why The Big Parade was one of the most-watched films of the entire silent era.