Starevich’s stag beetle films were released by the Aleksandr Khanzhonkov Studio in Moscow, which made a deal with him to release more stop motion novelties. From 1911-18 he made about thirty films–representing countless hours of slow, careful labor (not counting a few forays into live action). Of his surviving work, The Cameraman’s Revenge is considered an animation classic.

Since this short is so darn GIFable, I’m going to walk you through the plot a bit–but just in case you’re fussy about century-old film spoilers, here’s the short below:

So! It begins with an introduction to Mr. and Mrs. Beetle, who “have too calm a home life.” We’re informed that Mr. Beetle apparently takes frequent “business” trips into the city–Mrs. Beetle seems to suspect nothing. The insects apparently inhabit a world of human-like houses, hotels and nightclubs–just in miniature.

We then see Mr. Beetle in his place of business–the “Gay Dragonfly” night club (the title card dryly notes, “The dancer there understood him”). We see him and other insects drinking and enjoying the show, where a lovely lady dragonfly is the evening’s highlight. She and Mr. Beetle leave together, much to the ire of a rival suitor, a grasshopper who also happens to be a cameraman. (I love the moment where Mr. Beetle decides to make a move.)

Wonder if that stag beetle was from one of Ladislas’s documentaries…!

Angry at Mr. Beetle for claiming the dragonfly’s affections, the grasshopper decides to follow the pair to a hotel (yes, to a hotel) and secretly film them for Future Utter Humiliation purposes (we see them kissing through a keyhole).

In the meantime, it’s revealed that Mrs. Beetle also has a secret lover: an artist (another grasshopper) who comes over wearing a ridiculous “artsy” hat with long feathers. He also brings over her freshly-painted portrait:

Mr. Beetle comes home, discovers his wife’s secret, and a brawl ensues. Afterwards, a title card announces a supposed change of heart has taken place: “Mr. Beetle is generous. He forgives his wife and takes her to a movie.” Heh, guess he can’t afford to be too outraged, hey?

The bug movie theater is an outdoor one, apparently, with an appropriate painted backdrop. But guess what film is playing? 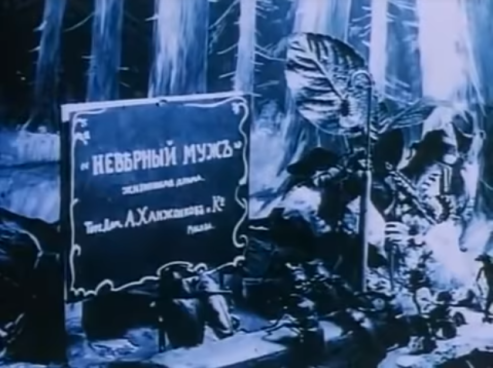 Note the tiny screen with Cyrillic letters!! I dig that very much.

It’s none other than the film taken by the vengeful grasshopper suitor, who happens to be the projectionist. Mrs. Beetle is not amused:

One more GIF and it’s out of my system, I swear.

Surprisingly timeless and charming, am I right? Starevich’s animation is truly a wonder considering its age, and you can tell he had a keen eye for body language. There’s some jerkiness, understandably, and he hadn’t quite figured out how to make falling or jumping move at a faster speed (particularly noticeable in the above GIF). But he infuses his tiny characters with very human personalities, who somehow still seem very much like insects. I like the little touches like having the grasshopper’s antennae lying down smoothly while he’s at the club, then sticking straight up with irritation when he sees the dragonfly leave with Mr. Beetle.

The story might seem familiar, as indeed it should. Variations of it were popular in early comedy, revolving around the basic idea of a husband lying to his wife (usually so he can go on a trip or to a party) and then being exposed by a timely newspaper or camera footage he wasn’t aware of (usually after the poor wife thinks her husband has died–the stories vary). The plot shows up in many films, from Biograph’s A Wreath in Time (1909) to Keystone shorts like Ambrose’s First Falsehood (1914) to Roscoe Arbuckle’s A Reckless Romeo (1917). The most famous example is probably The Sons of the Desert (1933), where Stan and Ollie secretly attend a fraternal convention and their wives end up seeing them in newsreel footage of a parade.

Leave it to the boys.

We take it for granted today, but back when cinema was young, the idea that the latest technology could quite literally capture every detail of our most humiliating moments was very new. (There were already popular gags involving mischievous boys and Kodak cameras, but film sure upped the potential for humiliation!) It didn’t take long for filmmakers to come up with various wacky scenarios involving footage of clandestine meetings–Starevich being an early, highly observant example.

Partway through The Cameraman’s Revenge, Starevich humorously included a single shot looking down on part of a yard, showing the bug-sized car bearing Mr. Beetle and the dragonfly to their hotel and the grasshopper’s teensy bike in pursuit. A clever touch, not only because we’re seeing these wee characters in their real-life context, but because their all-too-human drama is somehow put in context as well. 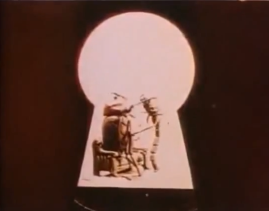 My main source for the articles in Silent Stop Motion Month is the wonderful book A Century of Stop Motion Animation: From Melies to Aardman by Ray Harryhausen and Tony Dalton. Also very helpful was: