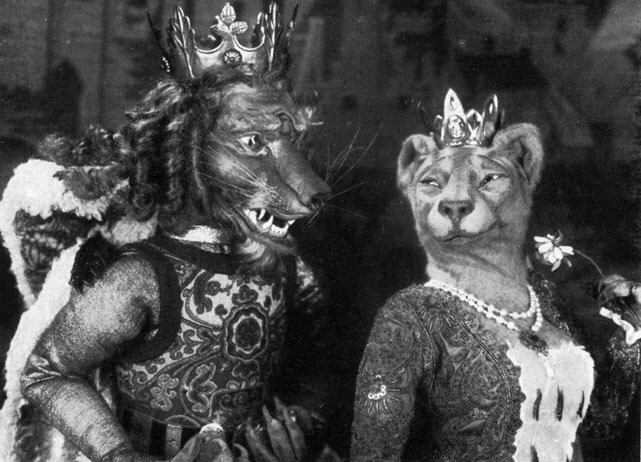 Born in 1882, the Polish-Russian Starevich was raised by his grandparents in Kaunas, the second largest city in Lithuania (back then a part of Russia). He was educated in what is presently Estonia, but apparently got expelled for “his independent and critical mind,” as some have put it. Interested in a wide variety of subjects, such as drawing, photography, film, acting, ethnography and entomology (he had a huge insect collection), he eventually became involved with museum work–some sources say he was a natural history museum director in Kaunas.

He began dabbling in film by creating short documentaries on insects, particularly stag beetles. Ambitiously, he hoped to capture a stag beetle fight, but soon discovered the bright lights in the primitive studio setting made them sluggish or even die: “I waited days and days to shoot a battle. But they would not fight with the lights shining on them.” 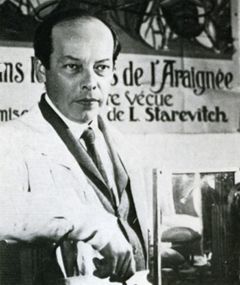 Undaunted–and being decidedly creative–Starevich decided he would stage the battle himself by using dead stag beetles as puppets (bits of wire and sealing wax were involved). Inspired by Émil Cohl, who had made the film Animated Matches (1908) for Gaumont, he studied how the stop motion technique worked and after a few test runs released The Battle of the Stag Beetles (1910). It was a success, and Starevich was officially sold on this unusual, painstaking genre of animation.

The Aleksandr Kkanzhonkov Studio in Moscow made a deal for Starevich to make more stop motion films, and he obliged with such classics as The Beautiful Leukanida (1911), The Ant and the Grasshopper (1911) and The Cameraman’s Revenge (1912), again using dead insects as his puppets. Confident in his abilities early on, he gave his insects human-like personalities and stories–The Beautiful Leukanida was more fairytale-like, while the humorous The Cameraman’s Revenge told a modern story of a beetle having an affair with an attractive dragonfly.

He had the remarkable ability to give his tiny characters human-like emotions and behaviors while still making them seem like real insects (sometimes he included frogs). Often, several models would be in the same frame, each having their own motivations and precise gestures. In a time when many directors still struggled with set lighting and how to do those rare camera pans, Starevich’s delicate shorts show an intuitive understanding of his art form. This didn’t go unnoticed–his films were popular and widely admired, with The Ant and the Grasshopper reportedly earning him a decoration by the Tsar himself. 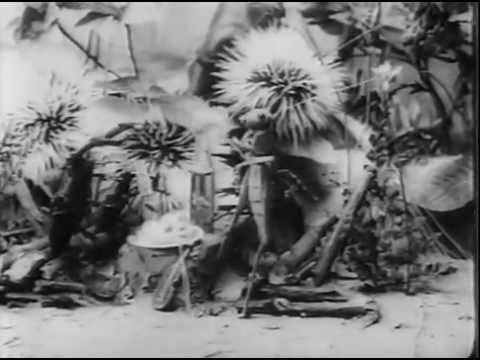 He had an affinity for fables and fairytales from Eastern Europe, retelling them in films like The Dragonfly and the Ant (1913). He was also attracted to the folk tales and traditions about Christmas, showcased in charmers like The Insects’ Christmas (1913) and the macabre The Night Before Christmas (1913), a live-action featurette based on a Nikolai Gogol tale about a mischievous devil in league with a witch. Old legends and folklore were fitting subjects for stop motion animation, with its uncanny blend of actual models and herky-jerky motions that recall strange dreams.

During World War I he dutifully turned out the propaganda film How the German General Signed a Pact with the Devil (1914) and The Lily of Belgium (1915). Following the 1917 Russian Revolution, Starevich left Moscow and hopped from Crimea to Italy and finally to the suburbs of Paris. He set up a home studio and soon churned out more fantastical stop motion films, including The Frogs Who Wanted a King (1922) and the beautiful hand-tinted The Voice of the Nightingale (1923), which won a Hugo Riesenfeld medal. He also branched out into other types of stories, such as the Chinese tale The Eyes of the Dragon (1925) and The Town Rat and the Country Rat (1927), a parody of American slapstick.

By the end of the 1920s Starevich directed the feature-length The Tale of the Fox (1930), his most ambitious project yet and the culmination of ten years of preparation. Telling the story of a trickster fox irritating the inhabitants of an animal kingdom, it used numerous life-sized animal figures in elaborate, Renaissance-style costumes. Some scenes had dozens of models, using thousands of separate movements for brief minutes of footage. It was the sixth animated feature to date, but thanks to issues with financing and adding sound it wasn’t released until 1937 (only a few months before Disney’s Snow White).

Throughout the ’30s he continued making films, mainly with animal protaganists. He retained his affinity for fairytale and fantasy, while occasionally taking a chance with a work like The Mascot (1933). Concerning a toy dog who undergoes a perilous journey to bring an impoverished child an orange, even in its day it was called “a bizarre film.” (Terry Gilliam considered it one of the best animated films ever made.)

By this point Starevich’s animation was much smoother than in the Edwardian days. He worked with puppets made of chamois leather and felt with movable steel frames, making them more durable and lifelike. His sharp eye for detail extended to creating motion-blur, achieved by fastening his models to wires and letting them quiver as the camera rolled, or else holding a glass smeared with petroleum jelly in front of the lens. His wife Anna and daughter Irene would assist him as much as they could, making the productions very much a family affair (Irene in particular helped write a number of stories).

After ceasing production during World War II, Starevich returned to filmmaking, working on various projects throughout the ’40s and ’50s (such as Fern Flower, which won the top prize for “best animated film” at a children’s film festival in Venice). In 1965, having made dozens of shorts using that oh-so-tedious art form, he passed away during the production of what would’ve been Like Dog and Cat.

Widely admired and praised in his own time and place, Starevich is now an obscure figure known to select film buffs and fans of early animation. Fortunately, a decent amount of his work survives, and remains a singular bridge between the busy modern world and shadowy Old World tales. And in a time when CGI dominates special effects in cinema, he has the ability to impress us more than ever with his remarkable imagination and apparently limitless patience. 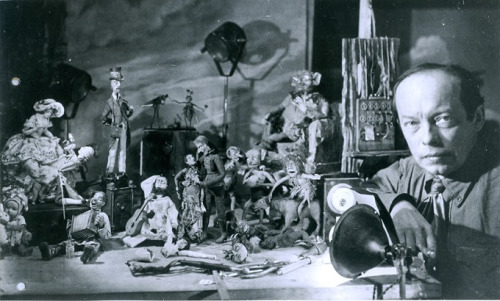 I’m happy to say that Starevich has a memorial (complete with fitting statues) in his home town of Kaunas!

My main source for Silent Stop Motion Month is the wonderful book A Century of Stop Motion Animation: From Melies to Aardman by Ray Harryhausen and Tony Dalton. Other sources: