If you could sum up the idea of slapstick comedy film with a mere two phrases, one would be “custard pie” and the other would probably be “banana peels.”

But did you ever wonder where this classic gag come from? Why were banana peels in particular an ever-present hazard to a screen comedian’s life and limb?

And even farther back than this 1910 postcard.

Back in the 19th century, litter was a problem on many city streets. The problem increased with industrialization as more and more people flocked to the cities. Fruit was a popular snack sold at numerous street stands, and fruit peels would often end up littering the public sidewalks. Banana peels were a particular menace since they were not only slippery, but became even more slippery as they rotted into a greasy mess.

And thus the banana peel became a common annoyance, a national in-joke as well known as today’s riffs on teenagers being glued to their smartphones.

There’s a theory out there that “banana peel” was actually a polite euphemism for pet droppings, part of the modern tradition of trying to link innocent old-time things with something nefarious (or, in this case, yucky). Supposedly those squirmy Victorian comedians certainly couldn’t mention or depict excrement on the stage, so banana peels were substituted and audiences made the obvious connection of “yellow fruit peel = my dog’s business” without a second’s thought. But, research has shown that this story isn’t true.

In fact, look through historic newspapers for yourself and you’ll find plenty of laments about the very real banana peels and the anecdotes about the victims they left in their wake. Here’s one of the earliest references I found, in a sort of moral advice column from the Thibodeaux Minerva, Louisiana…1854 (no kidding):

“EVIL TO HIM WHO EVIL THINKS”–Never entertain suspicious thoughts of your neighbors; if you can’t clearly account for all their actions, give them the benefit of the doubt…If you step on a piece of banana peel, and slip and dislocate your ancle [sic] in front of a doctor’s office, don’t entertain an idea that the M.D. put it there in hopes that somebody would break his limbs and give him a job.

In spite of all that has been said by the papers about throwing banana peelings and such like things on the sidewalks, the custom prevails in Memphis to an extent not equaled anywhere that we know of. On almost every corner there is a fruit stand, around which the sidewalks are littered with these dangerous parings, and not a day passes that someone does not receive a fall from stepping on them.

And here’s some candid sentiments from The Charleston Daily News, also 1870:

The amount of profanity which results from the presence of banana rinds and orange peel on the sidewalk is fearful. Several persons have had falls from stepping on these treacherous articles, which sufficiently hint that a little care on the part of those who eat such luxuries may save a doctor’s bill.

These falls weren’t an exaggeration–they really did happen! Here’s one clipping that I simply must reproduce in full. From The Canton Advocate, South Dakota back when it was still Dakota Territory, for Pete’s sake, 1888:

Note the joke about banana peels being well known to “level all ranks.”

And here’s one from The Forest Republican, February 23, 1881. Apparently people took to recommending ways to recover from falls:

Thomas O. Thompson, Esq., the Mayor’s Secretary, who, some few days ago, slipped on a banana peel and sprained his knee, writes that St. Jacobs Oil “acted like a charm.”

And at least one unfortunate soul literally died from a bad fall. From The Washington Times, November 1, 1917:

New York, Nov. 1.–Jacob Bopp, a chauffeur of Brooklyn, slipped on a banana peel and died within a few minutes of a fracture of the skull.

Nowadays, and contrary to this overwhelming evidence which ought to strike fear into their hearts, people sometimes put the ol’ banana peel gag to the test. The show Mythbusters did a bunch of experiments and decided that the peels were definitely slippery but that a bad fall on just a single peel (like you see in the movies) “isn’t likely to happen by accident” (Thomas O. Thompson, Esq., the Mayor’s Secretary, and Jacob Bopp would beg to differ).

But there’s one fact that Mythbusters didn’t know–the bananas we eat today weren’t the same as the bananas of yesterday.

Nowadays, the banana we all eat is a variety called Cavendish. But from the 19th century up until the 1950s, the common variety was the Gros Michael. The Gros Michael was sweeter, creamier, and didn’t bruise as easily as the Cavendish. And the individual peel was…more slippery.

These ain’t your grandmother’s bananas…wait, actually they totally were.

In the 1950s, a devastating strain of Panama disease spread through banana plantations in Central and South America, almost destroying the Gros Michael variety all together. Growers had to switch to the Cavendish variety that we commonly eat today–less tasty, but resistant to the disease. The more you know!

So how did slipping on those yellow peels become a comedy routine, specifically?

As we know, art imitates life. As I said earlier, the idea of slipping comically on a fruit peel was a kind of widespread in-joke, and it didn’t take long for it to creep its way into stage routines and comic strips (which were huge back in the day).

By the early 20th century, these slips had been a staple of comedy for decades, long enough for critics to groan about it. Here’s an excerpt from a 1909 Variety story called “How Jokes Are Made”:

The race has sweetened and shed some barbarism since the old gladiatorial days, but you couldn’t see a grocer’s boy with a basket of eggs slip on a banana peel and alight upon his left ear and the eggs together without a smile or something more noisy. As proof of it, the slipping on a banana peel episode has been so done to death by the funny papers that it is tabooed now entirely as too old.

The gag was showing up on that ever-influential vaudeville stage as well. A man known by “Sliding” Billy Watson made it a part of his identity. A “Dutch” burlesque comic from 1911 to early Twenties, he was popular for his funny “slides” which he said were inspired by seeing a man struggle to regain his footing after slipping on a peel. He was sometimes nicknamed “The Flying Dutchman.”

“Believe me,” he once said, “I never go past a banana peel on the sidewalk now without feeling inclined to take off my hat and bow to it in a spirit of reverence.”

There was also a vaudevillian named Cal Stewart who incorporated a ton of banana peel jokes into his stage routine as a character named “Uncle Josh.” We can assume plenty of other comedians made do with the funny fruit trope, too.

And that brings us to the movies!

Mental Floss said that the tried-and-true gag entered the movies via Harold Lloyd’s short The Flirt, released in 1917. It’s also been suggested that Charlie Chaplin was the first to use them in By the Sea (1915). Oh, no. Heavens no. Positively no. There’s no way that entered films as incredibly late as 1915.

Charlie was but partaking in a long established tradition.

In fact, it entered films at least as early as 1905, when the Crescent Films company released a series of everyday “scenes” including one called What a Banana Peel Will Do. And it wouldn’t surprise me at all if there were even earlier films making use of the offending fruit.

Very soon, it became a symbol of lowbrow slapstick comedy. In 1914, a Moving Picture World article on comic films complained:

There has been altogether too much of what is known as “rough-house” and “slap-stick” comedy. The patrons are surfeited with it and the exhibitors have had more than a genteel sufficiency. It would be well to try for a finer and somewhat cleaner vein. We are glad to observe a tendency to follow this new direction. A creation of comic types from life and the making of situations which rouse laughter without the fatal banana peel and the seltzer bottle mark the coming of new kinds of comic film.

But despite this disapproval from the highbrows, the fatal banana peel was in movies to stay. Sometimes whole films were built around it. There’s a 1914 film called Fatty and the Shyster Lawyer (not a Keystone film with Roscoe Arbuckle, but a Kalem film starring John E. Brennan) where the main character slips on a peel and some shady lawyers induce him to go to court complaining of every ailment “from paralysis to dandruff.” (He’s even brought into the courtroom on a stretcher.) 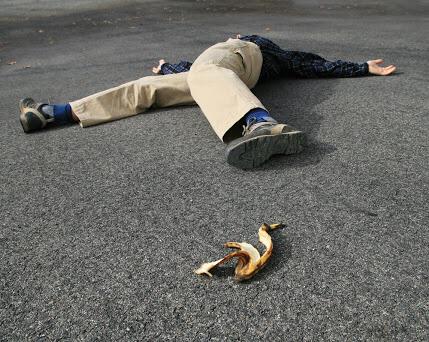 I could find relatively few photos of silent comedians and banana peels, so here’s this guy.

And there’s an actual Keystone film from 1913 called A Healthy Neighborhood which revolved around the banana skin. As described by Moving Picture World, October 25, 1913:

Another screamingly funny comedy of the nonsensical sort.  Ford Sterling gives a most enjoyable characterization of Dr. Noodles, who places banana skins on the walk in order to get patients. This reel works up into a highly diverting situation.  A good comedy number.

And thus the banana peel would make persistent cameos throughout early 20th century comedy, especially in the more low-budget efforts–although by this time it had lost it’s original context of “symptom of the litter problem” and was simply “a thing to cause funny pratfalls.” As it still remains to this very day.

One of the best uses of it has to be in Buster Keaton’s The High Sign (1921), where a banana peel is thrown on the sidewalk and Keaton comes walking blithely around the corner…does not step on the offending rubbish, and flashes the camera a quick “high sign” as if to say, “Fooled ya!”

In later years Keaton admitted that he was never fully comfortable with this gag, thinking it was maybe “outsmarting the audience a little too much.” Sorry, Buster, but this gag has totally stood the test of time. There’s nothing better than showing it to an uninitiated audience, because as soon as they see the banana peel they assume that of course the hero will slip on it–this is a 1920s film after all, right? Isn’t this where that old gag came from? But then when he doesn’t the audience is taken totally by surprise. And I love it.

Later in his career, you might say that the peel finally had it’s revenge–in The Cameraman (1928) Keaton falls while going out on a stroll with his crush.

In this case, the joke might be how ludicrous it was for his character to actually slip on a banana peel, of all the silly things.

Today, decades after the era of the silent clowns, the idea of slipping on those yellow peels is firmly entrenched in our comedy culture. The historic context is long gone, but the gag remains, still dippily hoping to please. You’ve got to wonder if it’s here to stay, and if future generations will still be chuckling at it, if only out of familiar habit.

I’m guessing it will be. At the end of the day, satire and witty references will become dated and forgotten…but goofy pratfalls are simply always going to be funny.

For even more details, I heartily recommend this article, which is full of a wealth of historic clippings and great research: http://esnpc.blogspot.com/2014/12/a-slippery-history-of-banana-peel-gag.html

22 thoughts on “The History Of Those Darn Banana Peels”