We made it, folks. THIS IS IT. Buster Keaton’s very first film–Roscoe Arbuckle’s fantastic The Butcher Boy (1917), distributed by Paramount Pictures–was released on this day 100 years ago. This is when his career in cinema truly began.

Please enjoy this priceless rare lobby card that just popped up on Google out of nowhere.

100 years ago, frames and easels holding bright new posters for The Butcher Boy were being displayed at the movie theaters.

100 years ago, projectionists were threading their projectors with the clean, tightly-wound, shiny new reels of this comedy.

100 years ago, people were walking down the streets on this spring day and stopping in front of the theaters to look at the posters. Maybe they bought a ticket right away, or maybe they made a mental note to come back later.

100 years ago, audiences might’ve sat through a modest stage show before the films began. Maybe newsreels, cartoons, short documentaries, or even a feature would play before they got to see the comedy short.

Maybe a lot of them started laughing the moment Arbuckle came onscreen, being so familiar with that wildly popular funnyman.

Maybe a few of them recognized the young supporting player in the overalls from his many years in vaudeville.

Maybe those who didn’t still took notice of him.

Maybe they gasped when that same young man did a magnificent pratfall where he spun on his head.

Maybe they liked the whole comedy so much that they sat through the feature and then the stage show and other films so they could see it again. Happy 100th, Butcher Boy. Thanks for introducing Buster to the world. 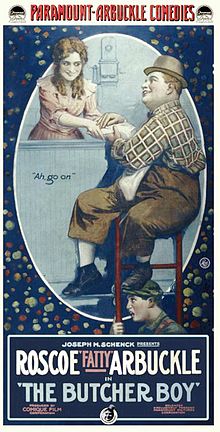