So why does this guy…

…owe an eternal debt of gratitude to this random silent film actress?

Let’s flash back nearly 100 years, right to the end of World War I.

If you are interested at all in history, or even just film history, or heck, have even just been following this blog, you’ve noticed that WWI was the game changer of the 20th century. Germany, as you can imagine, wasn’t exactly popular from 1914-1918, one of the (many) results being that German films were no longer welcome in most countries.

Not even mini-Germans were welcome.

But once the war ended, countries started to soften their attitudes toward their former enemy. In 1920, the U.S. started playing German films in its theaters again.

1920…that seems awfully soon, doesn’t it? Four years of no-holds-barred, hold-onto-your-sauerkraut anti-German propaganda can’t be forgotten that soon, can it? What caused this change in attitude?

For there was an awful lot of attitude to change.

Some background: during the 1910s, director Ernst Lubitsch was making a name for himself in Germany (you may have heard of him). His first official big success was the 1918 film Die Augen der Mumie Ma (The Eyes of the Mummy) starring a dark-haired starlet named Pola Negri. This was the beginning of a happy partnership between Lubitsch and the “earthy” young actress, who was a perfect match for his lauded “Lubitsch touch.”

But the U.S. didn’t pay much attention until Lubitsch released a film that was such a smash hit that it couldn’t ignore German films any longer. That hit was the costume drama Madame du Barry (1919), proudly starring Ms. Negri. It was called Passion when it was released in the U.S in 1920.

The U.S. started small with Passion, booking it for a middling 1-night showing at the Capitol Theatre in New York City. Eh, maybe someone will like it, they thought, even though its German. Of course it was advertised as an Italian film, just to be on the safe side.

Two weeks and 300,000 ticket sales later, the anti-German tide started changing. And thus the ban on German films came crashing down, not only because Lubitsch was amazing and because his film had great costumes but mainly because of Negri’s charm and charisma. Without her, the film probably wouldn’t have been the sensation that it was.

The world’s newfound interest in German films reached such a level that Lubitsch and Negri even signed contracts with Hollywood, something that would’ve been unthinkable during WWI. And in 1921, the U.S. got to see the film that represents all early German cinema to us today, The Cabinet of Dr. Caligari,

As you may have seen before right on this blog.

Caligari made audiences realize that not only was Germany making great films, but it had serious, groundbreaking works of art up its sleeve as well.  And thus German Expressionism spread its influence throughout the Twenties and beyond. It seeped into horror films, dark dramas, and film noir forever.

Let’s skip ahead to the 1980s, when a quirky young Disney animator with a liking for the macabre started working with stop motion puppets.

Tim Burton made his first animated short in 1982, called Vincent. It was inspired by Vincent Price, Edgar Allan Poe, classic horror films like Frankenstein, and clearly had a very heavy dose of German Expressionism.

This was the first of a long line of films Burton would produce that have a famed Expressionist look and feel to them–Batman, Edward Scissorhands, Sleepy Hollow, Corpse Bride, Frankenweenie, and of course The Nightmare Before Christmas.

“It was the strength and simplicity that I really loved about the expressionists’ work,” Burton said in a 1990 interview. “That and the fairy-tale element.”

His unique visual style makes him stand out today in the sea of “normal” filmmakers, to the point where he’s been honored with a MoMA retrospective and a travelling exhibition of his artwork and film memorabilia. And yes, not everyone is a fan (obviously I am)..but if nothing else his films are sure unforgettable.

But his style wouldn’t have evolved the way it has if it wasn’t for the influence of German Expressionism. And German Expressionism probably wouldn’t have made quite the same impact if the U.S. hadn’t ended its bans on German films when it did. And that ban might never have happened if Lubitsch hadn’t made such a hugely popular film that broke down all those angry barriers. And that film might not have been so popular if it weren’t for its star…Pola Negri. 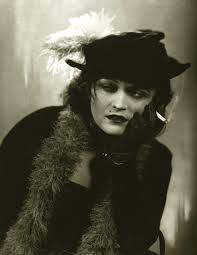 She could even be a little Helena Bonham Carter-ish.

And that, my friends, is why Tim Burton should give a big hearty THANK YOU to Pola Negri. Or at the very least, build her a little shrine. Or even give her a shout out in a film. Just about any film would do–he’s pretty creative.

At least ask Helena Bonham Carter about it, I’m sure it would be right up her alley.

9 thoughts on “Why Tim Burton Should Thank Pola Negri”