Out of all the silent film genres, one of the most popular is probably horror. Even people who don’t watch anything made before 1930…or, well, 1960…or, let’s face it, 1997…don’t mind tuning into Nosferatu or The Phantom of the Opera. What was freaky then is usually still freaky now, and at any rate it’s always fun to see what used to scare the knickerbockers off our great-grandparents.

But I’ve been thinking. It’s occurred to me that the mere banner of “silent horror” simply isn’t enough. No, I’m going to vote that we add a new genre–or subgenre, if you will. And it shall be called: “Silents That Would’ve Terrified Me as a Child.”

“Silents That Would’ve Terrified Me as a Child” films aren’t too hard to spot. Keep in mind that outright horror doesn’t quite fit the subgenre–because, come on, that’s too easy. No, most examples of STWTMAACs (dibs on the hashtag) are films that were whimsical and innocent at the time of release but have since aged into…creepiness. 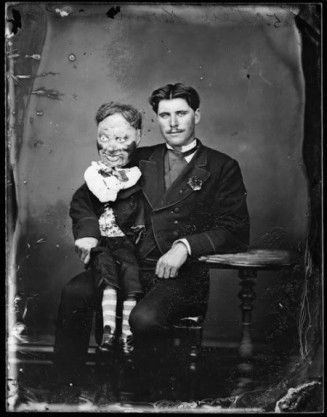 Actors in animal costumes are usually a tipoff. 1900s papier-mâché masks are a dead giveaway. Let’s just say that if 7-year-old me had gotten even a glimpse of the following films that the nightmares would only have stopped…let’s see…six days ago.

Oh, and maybe don’t show the following films to any newbie you’re trying to help fall in love with the silent genre. Some uninitiated souls can find silent movies creepy just by the virtue of being old and at a speed they aren’t used to. The following films…probably won’t help.

Okay, this is cheating–it’s not even a silent film. But it is by a filmmaker/animator known for his charming work during the silent era, and it does feature one of the most horrifying stop motion puppets my involuntarily bleeding eyes have ever beheld.

In case you’re wondering, that’s supposed to be a dog. A funny dog that’s supposed to cause laughter and mirthful enjoyment, not be a grimacing hellhound made of soggy Kleenex. If there’s any upside to Bowers’s work being lost for so long, it’s that the Child Me was spared from ever seeing this creation.

Don’t get me wrong, I love Charley Bowers. His work is amazingly clever and fun to watch. And yes, some of it’s weird. But in this case, I can only assume that the character design was the result of Charley being on some kind of absinthe/chocolate cake/imitation crab meat bender.

This piece of a schizophrenic’s darkest hallucinations is attributed to director Segundo de Chomón. It’s a kind of fantasy/comedy film about the exploits of picnickers who find out they have some seriously rotten food, and who return home to suffer nightmares purportedly caused by the rotten food they didn’t even eat. It is, without a doubt, one of the most bizarre silent films I’ve ever seen, and I’m super thankful that Child Me was spared from seeing such an unholy spectacle.

It’s not only bizarre and nonsensical, but…gross. On the picnic, they cut into a sausage to see bugs spill out. Eggs turn out to be full of mice. And the cheese is infested with worms:

I almost made a gif of the bug-infested sausage, but…it’s pretty rough.

The four picnickers–a couple and their two servants–return home in disgust. The couple goes to bed and the servants dink around in the kitchen, where they experience what I can only describe as a drug-induced vision of a pot growing a face:

Let me share the horror with you, so that I am no longer alone.

The couple, in the meantime, suffers from nightmares that take the form of an animation sequence where demons apparently spring forth from the woman’s mouth and feet:

“Incubi got nothin’ on us!”

And where a well turns into a giant, rising head that seems to have only one (only one) eye that can fully function:

If you ever hear the faint sound of maniacal laughter in your head, it’s probably from this thing.

I don’t even know what else to say, only that as long as this film exists it shall remain a threat to the psyches of innocent children everywhere.

Can’t get much more concise than that! Behold:

This is usually what he looks like before coffee.

After being terrified by a series of leering decapitated heads floating in his mirror, the man finally loses it once he sees this effing thing:

Finally, a moment in one of these films that I can understand.

I once saw that particular head described as “Ed Gein wearing the skinned face of Alfred E. Neuman,” which is too perfect a description to ever be topped.

The English title of Ah! La barbe! is A Funny Shave, which sounds awfully optimistic if you ask me. 7-year-old me would’ve called it something more fitting, like: “TURN IT OFF MOMMY I’M SCARED.”

“An Edwardian Christmas film? Really?” you say incredulously. I shake my head with a gentle smile. Ah, my friend, how innocent thou art…but not for long.

This Russian film was based on a tale by Ukrainian writer Nikolai Gogol, one that decidedly does not involve sugar plums or pop songs about rockin’ around a tree. It was filmed by Ladislas Starevich, an obscure figure today who made a number of unusual and charming stop motion shorts about anthropomorphic insects (they’re great).

It starts by introducing our charming Advent time characters. Such as this one:

“But…but I thought this was going to have Santa! OMG, WHY CAN’T THERE BE SANTA??!”

Yes, this is the sort of winter tale that has more in common with the Krampus legends than jolly snowmen. In the beginning, a demon teams up with a witch called Solokha to cause mischief on Christmas Eve. The rest of the story involves a metalsmith trying to woo a young woman, the demon being put in a bag and something about shoes. I had to look it up, because after seeing this shot I had to turn the film off and couldn’t watch it again until right before starting this article:

Do I really need to explain why the 7-year-old me would not have responded well to this? Do I??!

So why is this charming Maurice Tourneur fantasy, wherein peasant children Mytyl and Tyltyl are led by the fairy Berylune to search for the Blue Bird of Happiness, on the list? Welll…

It’s an obscure film that I enjoy today for its imagination and beautiful imagery, although at times my enjoyment is tempered by…unease. I’m thankful I saw The Blue Bird as an adult with some knowledge of the silent era under my belt, because dang would my grade-school self have been creeped out by this.

Part of the story has to do with the fairy giving Mytyl and Tyltyl a magical hat that allows them to “see” the souls of “Things”–that is, Water, Fire, Milk, Bread, etc. They even see the souls of their pets (which are Things?), transformed into pasty-faced humanoids who don’t make the kids scream and run away.

And they apparently have spasms.

These Things would not have filled the Child Me with joy and wonder. And who knows what I would’ve thought of, say, the Soul of Sugar, who looks a little like the Tin Man crossed with an overly-friendly mime.

So the kids take their Soul pals on a quest to find the Blue Bird of Happiness, exploring the Palace of Night where they see fairytale things like Wan Sicknesses, Shades and Terrors. They end up in “the graveyard where the happy Dead sleep” (Dora the Explorer, this is not), where they run and hug their long-gone grandparents. And Mytyl, who probably was always the morbid one, asks them:

Grandma cheerfully summons something like seven deceased siblings, who file down the staircase and surround the gleeful Mytyl. I know the child mortality rate was higher back in the day, but good heavens.

Apologies to the poetic Tourneur, but after seeing this Child Me would have ended up hiding under a blanket as the vague sense of unease took over my stomach and slowly spread to my entire being.

So after witnessing all that and after bathing ourselves in holy water, watching a brief film of a stage act featuring a dancer in a big pig costume can’t be that bad, right?

After all, it’s a pretty good costume for the time. The act is a definitely weird, and has that slight Island of Dr. Moreau vibe, but it has its own unique charm. I guess.

Nope, not too scary at all! The 7-year-old Me just might have been able to watch this unscath–

My apologies, I seem to have blacked out for a moment. Anyhoo, these films were all pretty much the worst things you could’ve plunked before my prepubescent eyes. But believe it or not, it could’ve be worse, my friends. Oh yes, it could’ve been so…so…much…worse.

Behold the stars of the Funny Face comedy series, few of which exist and which are thankfully hard to find, circa the late ’10s and the ’20s:

If you gaze into their eyes, make sure you’re holding onto a crucifix.

Yes, this was a comedy series starring the offspring of Howdy Doody and Chucky, and yes, presumably early 20th century children saw it. It really makes you ask yourself “why” a thousand times, doesn’t it? Especially once you consider some of the ads for this series: 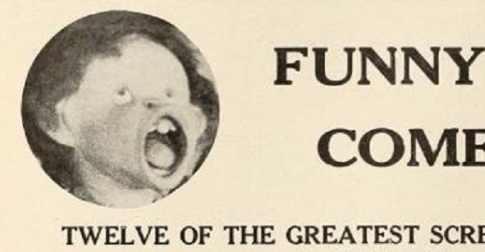