Boris Karloff and Bela Lugosi are not only two of the most iconic faces of movie horror, but two of the most iconic figures in Hollywood history, period. The “looks” of Frankenstein’s monster and Count Dracula are synonymous with those early Thirties screen interpretations, to the point where only literature buffs remember that Bram Stoker’s Dracula was a disturbing elderly man with a mustache and that Mary Shelley’s Monster spoke philosophically about its own existence.

There are only these men.

We tend know Karloff and Lugosi exclusively for their work in horror, especially since both men ended up having lengthy, if very typecast, movie careers. But did you know that good chunks of those careers were during the silent era?

Let’s take a look at what Boris and Bela were up to before the talkie era arrived: A future Monster at a more youthful age.

If you had gotten to meet Boris as a young man, he would’ve introduced himself with his original name: William Henry Pratt. Yes, the one-day icon of horror used to be known as Billy Pratt.

The Anglo-Indian Billy was born in London, and was the youngest of nine children. While the rest of his siblings would forge distinguished careers in areas of diplomacy and other civil services, Billy sheepishly professed a love of acting. It’s thought that he chose his stage name, Boris Karloff, partly to conceal the disgrace of a Pratt becoming a lowly actor. (Despite his anxiety, his siblings were said to be proud of their brother’s later success.) Although he had no Russian ancestry, “Boris Karloff” suggested a connection with the Russian émigré–a big topic at the time.

Boris started appearing on stage in 1909, spending about ten years performing with shows that traveled throughout Canada and the U.S.. Manual labor jobs provided extra income, as they would during his early forays into film, starting as an extra in the Pearl White drama The Lightening Raider (1919).

A mustachioed Boris in Exhibitor’s Herald, 1922.

Karloff had a number of bit parts and supporting roles in the early ’20s, his niches being serials and adventure stories with exotic settings (and by the way, it’s not true that he was an extra in The General). The titles of these films were along the lines of The Masked Rider, Vultures of the Sea, The White Panther, and Perils of the Wild. And funnily enough, despite his name-changing attempt to seem Russian he would often be cast in roles such as “Maharajah Jehan” and “Priest of Kama-Sita.”

By the mid-’20s, although exclusively a supporting actor and bit player, Karloff was gradually becoming a familiar Hollywood figure. One letter to a 1925 Picture-Play Magazine mentioned: “…Boris Karloff, the greatest natural actor on the screen to-day, is becoming popular. He has always been my favorite actor ever since I first saw him in ‘The Hope Diamond Mystery’ serial.” However, it would take until the talkie era for Karloff to get his “big break”–with, yes, his role in Frankenstein (1931).

Béla Ferenc Dezső Blaskó was born in Lugos, Kingdom of Hungary, an area that is now part of Romania (so you could say that he’s practically a native of Transylvania). A few years after dropping out of school at age 12, Lugosi began acting on the stage. He adopted the name “Bela Lugosi” in 1903, probably in honor of his hometown. Over the years he became skilled enough to be in Shakespeare productions, and performed with the National Theatre of Hungary during the 1910s–although as a supporting actor, not a leading man as he would later claim.

Lugosi’s theater career would be interrupted by his service during WWI, where he was wounded three times and awarded the Wound Medal. Following this he began supplementing his stage work with supporting roles in films, his first being a small part in Az ezredes (1917). His film name was “Arisztid Olt.” Lugosi–or rather, Olt–made 12 Hungarian films before the Hungarian Revolution of 1919, when he was forced to flee to Germany (apparently due to activism in an actors’ union). There he continued with small film roles, some of which were in acclaimed works such as F.W. Murnau’s Der Januskopf (1920), starring Conrad Veidt. 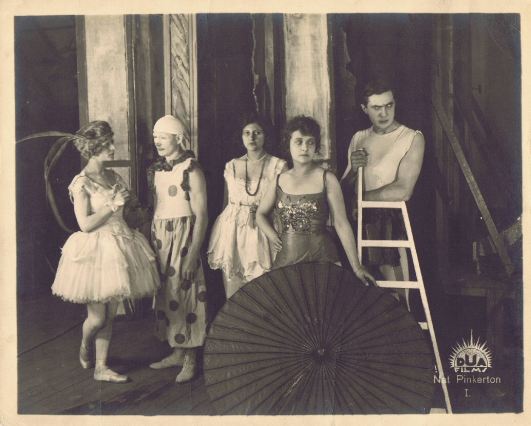 Glowering in Nat Pinkerton im Kampf (1920). Image from Vampire Over London: The Bela Lugosi Blog, which has a marvelous collection of photos from Bela’s silent days.

In October 1920 Lugosi was on the move again, heading west to the United States. He quickly worked his way up to Broadway, appearing in the hit play The Red Poppy in 1922. This won him the attention of the “movie folk” and he was offered his first U.S. film role: as a sinister Eastern European leader of a terrorist gang in The Silent Command (1923). Yes, the typecasting that would follow him the rest of his career started almost the second he entered Hollywood. 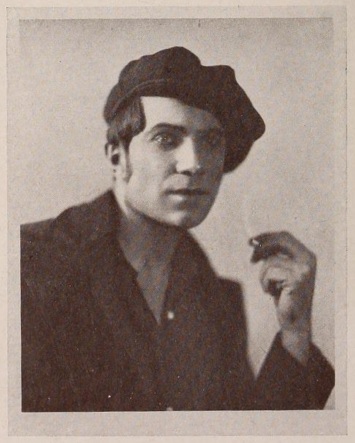 Lugosi around the time of his turn in The Red Poppy (Shadowland, 1923).

It’s an amusing coincidence that a Exhibitor’s Herald review of The Silent Command would describe it as a story of “plotters, vampires and ‘secret orders'”–“vampires” in this case meaning the 1920s femme fatales, of course.

Lugosi continued to play assorted “heavies” (usually with vaguely foreign backgrounds) in Hollywood features throughout the rest of the Twenties. But his most important role, the one that would forever influence his destiny, was in Dracula…the 1927 stage version. His version of the Count was unlike anything that had been seen before: suave, alluring, but still very frightening. And we all know who would then be chosen to star in Tod Browning’s 1931 classic.

Both Karloff and Lugosi had surprisingly similar careers. Both had grown up in Europe, both had been active on the stage, and both spent years in small film roles before finally getting their big breaks in the early talkie period. And both big breaks happened to be the roles they would be identified with forevermore. Their horror movie statuses became so ingrained so quickly that they would even be teamed up in several films together, such as The Raven (1935), The Invisible Ray (1936), and The Body Snatcher (1945). While not close friends, the two enjoyed their work together.

Both ended up being typecasted as well, eventually ending their long careers with strings of B-movies where they inevitably appeared in their familiar monster makeup. Karloff didn’t mind, as he felt that horror films were a modern-day version of Grimm’s fairytales, but Lugosi once lamented: “I don’t know if I should call it a fortune or a curse, but Dracula never ends.”

Time seems to have been kind to both of them. The cheesiness that’s always haunted their most famous characters still exists–as it probably always will be–in the form of Halloween costumes and unending cheapie horror films. But as I’ve mentioned repeatedly, both Karloff and Lugosi have ascended to the status of icons today. When you sit down and watch Frankenstein or Dracula today all the memories of cheesiness and B-movies fade away, and only those mesmerizing performances remain. 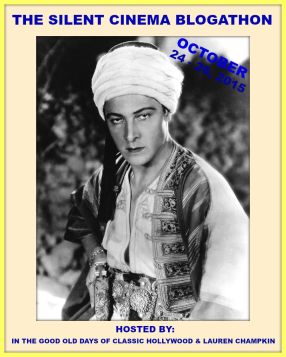 I am proud to have this post be a part of In the Good Old Days of Classic Hollywood’s Silent Cinema Blogathon, since a finer choice for a blogathon couldn’t possibly exist (*wink*). Thank you so much for reading, and don’t hesitate to check out all the other great posts on my favorite film era of all time!